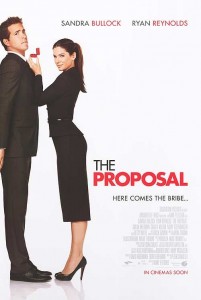 Movies which are specifically made to be romantic comedies are often a mixed bag for me and often don’t work well enough for me to even finish the film. I had been eyeing this one for a while and watching the star rating at Netflix before finally deciding to take the plunge and put it in my queue. After I finished watching it, I immediately turned on the commentary track and watched it again. It worked that well for me.

Margaret Tate (Sandra Bullock), is a ball busting senior editor at a NYC book publishing company. Her faithful dogsbody of three years, Andrew Paxton (Ryan Reynolds) loathes working for her but figures his wagon is hitched to hers so he does what he has to keep her happy and hopes it will pay off for him one day. That one day is now. Margaret is a Canadian immigrant who has pushed off meetings with her immigration lawyer and done things she shouldn’t do, immigrationally speaking, and now it’s caught up to her. With deportation imminent, Margaret pressures Andrew to marry her so she can stay in the US legally. He’s no fool and, with a 5 year stint in jail and a $250,000 fine facing him if the truth comes out, he pushes for what he wants from her.

With her back to the wall, Margaret gives in with little grace but in order to start fooling the USCIS, she has to accompany Andrew on a weekend trip to his home for a family celebration. Once in Sitka, things really start to get out of hand and Margaret begins to see how her plan could end up hurting this family she’s coming to love. Will there be wedding bells or handcuffs come Monday?

Alrighty then. First off, I’m not sure how real the immigration aspects of the film are so I just watched those and laughed at the stellar performance of Denis O’Hare who plays the main immigration officer assigned to Margaret’s case. The questions he helped come up with which are shown being answered during the closing credits of the movie are hysterical. Be sure to watch for these. The character of Margaret starts off as a Beyotch from Hell. Her employees hate her yet at the same time fear her wrath. IMs fly though the computer systems of the publisher warning of her arrival and when the news breaks about their (false) engagement, Andrew is subject to pitying and astonished looks from his fellow drudges. Yet Bullock manages not only to pull this off without making me hate her too badly but she also gets me to buy into her gradual change of heart about Andrew.

At first she’s appalled about going to Alaska, flying on a commuter plane, getting into a boat to reach the Paxton island home, facing the 50 guests at a party arranged to celebrate the engagement, attending a bachelorette party with Sitka’s only male stripper or joining Grandma Annie (Betty White) in her nature worship but soon manages to show a convincing change of heart. But none of that would have worked for me if not for Ryan Reynolds’ performance as Andrew. Watching him think and react to what’s going on around him is a treat, especially in the scenes when Margaret first announces their engagement and while at the USCIS. You can see the wheels turning and his mind computing what he’s going to be able to twist out of his boss for his cooperation. Then he takes exquisite glee in turning the knife at every opportunity he can. Margaret will get what she wants but Andrew’s going to make her pay through the nose for it.

But as with Margaret’s change of heart, I can believe what Reynolds does with his character as he watches his bitchy boss show her softer side and begin to loosen up under the influence of his family who accept her into their midst. So when he does propose to her for real, I buy it hook, line and sinker. Another thing I like about the film is that it has several places where it could turn onto the standard Hollywood rutted road of rom-coms but doesn’t. Subplots concerning Andrew’s relationship with his father and a former girlfriend could have gone the way I almost expect them to but they didn’t. It’s a little thing but another instance of the director pulling back from the usual cliches.

The film is filled with fantastic actors including Betty White who almost steals the show – watch for her facial expressions and perfect comic timing, Mary Steenburgen and Craig T Nelson as Andrew’s parents, Malin Ackerman and Oscar Nunez as well as the previously mentioned Denis O’Hare. They are all perfectly cast and do a superb job.

But I think what makes the movie work for me is the fact that it tries to pull back from overdoing it. The film makers go for some subtlety of emotion rather than broad OTT slapstick. Yes, some of the scenes are played for laughs – the stripper and the nature dance are two – but none of the characters comes off as or is made to look too much like an idiot – unlike other rom-coms I’ve seen recently. I would agree with several reviewers who state that overall, the movie is formulaic but then, it’s a rom-com and the ending is supposed to be a reversal of the initial polar opposite main characters. But it’s the way that the film gets to that reversal that makes it different for me. Sharp dialogue, great scenery – even if it’s mainly computer enhanced, a great supporting cast and likable leads combine to give me a fun and enjoyable viewing experience. B+