“Death can not stop true love.”

“Hello. My name is Inigo Montoya. You killed my father. Prepare to die.”

I’ve actually been a little scared to write this review. It’s been such a favorite story of mine – both the book which I read yonks ago as a teenager and the movie which I’ve loved for years – and a cult favorite of so many people that I admit the desire to do it justice almost tied me into knots. But finally I pulled out my DVD copy for my 451st watching, made copious notes and took a deep breath before sitting down at my computer. Here goes. Be gentle with me if I don’t quote your favorite line. Buttercup (Robin Wright Penn) and Wesley (Cary Elwes) have finally admitted their love for each other when Wesley goes off to seek his fortune before they marry. But after he’s reported as having been killed by the Dread Pirate Roberts, Buttercup mourns for five years. At that point, she’s coerced into an engagement with Prince Humperdinck of Florin (Chris Sarandon) whom she doesn’t love.

When Buttercup is kidnapped by three mercenaries Inigo Montoya (Mandy Patinkin), Fezzik (Andre the Giant) and Vizzini (Wallace Shawn), a mysterious man in black follows them and defeats each mercenary with swordplay, wrestling skills and superior logic plus some advanced planning. It’s then that the identity of the man in black is revealed – though it’s hard to see why Buttercup didn’t catch on earlier.

But Prince Humperdinck, aided by his trusty six fingered man Count Rugen (Christopher Guest) has a nefarious plan which is only revealed when he catches up with the runaway pair. Now it’ll take all Inigo’s sword skill, Fezzik’s strength, Wesley’s superior intellect and planning skills plus a miracle pill, a holocaust cloak and a wheelbarrow to save the day.

“Hello! My name is Inigo Montoya. You killed my father. Prepare to die.”

William Goldman’s book is close to perfection. It’s an amazing adventure, it’s funny, it’s poignant and it rips fairy tales while paying true homage to them. For years it begged to be made into a movie but it took years before Rob Reiner, who also loves the book, took the helm and finally things got underway. Goldman adapted his own book into the script which mostly manages to retain its charm and wit and breathtaking adventure while not getting bogged down in all the details which are okay in a book but not a movie.

The casting is spot on. Elwes has the athleticism and humor plus the physical comedy needed to play Wesley. “This is true love – you think this happens every day?” He’s also damned good looking in an “Errol Flynn with a pencil thin mustache” kind of way. Robin Wright Penn is a good choice to play one of the most beautiful women in the world – after she scrubbed her neck a bit – and displays some gumption as Buttercup though as the titular character in the book/movie I wish Goldman had let her do a bit more than yell for Wesley. Count Rugen describes her as a touch simple and I tend to agree. Sarandon is both handsome and venial and can pout well in the end. I like how he can immediately convey that there’s something not quite right with his character but without giving it all away too soon. Of the three mercenaries, Mandy Patinkin is my favorite though Andre is running almost neck and neck with him. Their obvious friendship and chemistry is one of the joys of the film. The effort that Patinkin and Elwes put into their sword practicing shows – which is a good thing since they engage in the best sword fight in history and Goldman had taken the time to get all the correct fencing styles mentioned. And when Inigo finally tracks down the man who killed his father and then dispatches him – I cheer madly every time.

“Hello! My name is Inigo Montoya! You killed my father. Prepare to die!”

Christopher Guest is delightfully evil as Rugen, the man with an interest in pain but who is still concerned about his Prince. “Get some rest. If you haven’t got your health, you haven’t got anything.” Billy Crystal and Carol Kane are side splitting as Miracle Max – “The King’s stinking son fired me, and thank you so much for bringing up such a painful subject. While you’re at it, why don’t you give me a nice paper cut and pour lemon juice on it?” – and his wife Valerie. “Have fun storming the castle!”

Peter Falk and Fred Savage are charming as the grandfather who reads the book to his grandson. This is also a fabulous way to convey information about the story which would have come off as an info dump any other way. “Is this a kissing book?” And look for Peter Cook in a funny bit part as the plummy voiced bishop. “Mawage. Mawage is wot bwings us togeder tooday. Mawage, that bwessed awangment, that dweam wifin a dweam…”

One character who does not work as well for me is Wallace Shawn as Vizzini. Not only does he not look like the Sicilian he’s supposed to be but while everyone else deadpans the humor of the story and makes it work, he forces his lines which then come off as strident or smirky rather than sarcastic and funny. He does have a great exchange with Inigo though. Vizzini: “HE DIDN’T FALL? INCONCEIVABLE.”
Inigo Montoya: “You keep using that word. I do not think it means what you think it means.” 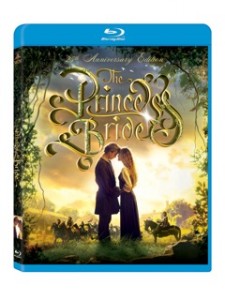 There are some cheesy special effects such as the climb up the Cliffs of Insanity, only two R.O.U.S.s in the Fire Swamp and the substitution of the Pit of Despair for the much more intricate Zoo of Death from the book but with only $16 million to spend, they still made it look pretty darn good.

I love that since its release, it’s become a classic that adults and children can both enjoy. It’s a charming, very funny, very witty fable. But it’s also “not just your basic, average, every day, ordinary, run of the mill, ho-hum fairy tale. It’s got “Fencing, fighting, torture, revenge, giants, monsters, chases, escapes, true love, miracles…” in short, it’s got almost everything and it’s one of my all time favorites. A-

“There’s a big difference between mostly dead and all dead.”