“There’s sex, snotty people and flamboyant costumes. What more could you want.” – Spanky and John Go to the Movies. 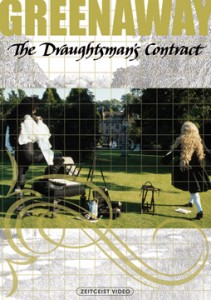 I’m almost hesitant to recommend this film just because I know a lot of people probably won’t like it. Note I’m not saying you won’t get it, just that you might not like it. I had read many of the reviews in which people who’ve seen the film praise it to the heavens – and also say that many viewers won’t get it – or conversely damn it as totally unwatchable. But with the film also getting heaps of praise for its costuming and music I decided to give it a go.

The plot is very complex so I’m just going to steal what they say at Netflix: “In 17th-century England, aristocratic Mrs. Herbert (Janet Suzman) commissions handsome draughtsman Mr. Neville (Anthony Higgins) to produce a dozen sketches of the family estate to surprise her absent husband. Neville accepts the project – in exchange for 12 sexual favors. The exceedingly smug Neville is in control till Mrs. Herbert’s daughter (Anne Louise Lambert) — who has her own agenda — outfoxes the arrogant artist.” The film is gorgeous to watch. The costumes, which are exaggerations of the current fashions of that day, are fabulous. As one reviewer said as many ribbons and lace as money could buy and then some. Plus wigs which are fantastic in length as well as amazing in the slight horned shape that some of the men wear – and which is very apropos for one of the men in particular if you know what the phrase “made to wear horns” means. The Jacobean house and gardens used in the production are beautiful and good use is made of all views and angles. Greenaway mentions that the antique tea set seen in one scene belongs to the owners of the house who kindly allowed them to be used and which were insured for more money than the entire budget of the film. The lighting, which is often just candles or lanterns, deserves praise as well as it helps set the mood for many shots. Greenaway set many of the scenes up as tableaux with few cuts and changes of viewpoint in order to make them look more like staged plays of the age. And the wide angle often used means that the actors’ faces aren’t close up enough for us to gain a lot of insight into what their characters are thinking – thus requiring the watcher to pay close attention to the many meanings of what is being said. I also love the music which riffs on Purcell. 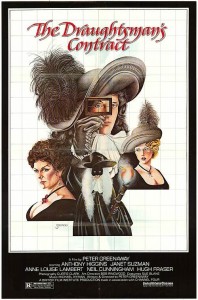 But it’s the layers within layers of the plot that makes you pay attention. I knew to be looking for the little items which appear in the views that Neville is drawing of the house and gardens. Items which on their own mean nothing but which put all together can make a case for murder. Because, yes you guessed it, this is actually a Glorious Revolution country house murder. Someone is dead, someone is going to get blamed for it and lots of people stand to gain from the death. Greenaway presents all the clues, shows who is responsible without coming right out and saying whodunnit and then has the culprits eliminate all those clues in order to wrap things up. And what had started out as a film showing Neville in control suddenly switches to reveal who has truly been in control all along and exactly what was needed from Neville. But wait, there’s more. Maybe. Even though Greenaway doesn’t mention this in his commentary on the film, a few reviewers have mentioned that the characters can also stand in for the great political figures and tumultuous situations of the day: William of Orange, James II, Queen Mary, Princess Anne, Prince George of Denmark, George of Hanover and England herself. I must admit I had fun listening for these allusions. There are allegories and symbolism in regard to fruit and paintings. The film tackles issues about Protestants and Catholics, servants and masters, sex and power. The pace is stately, the camera is fairly static, the dialogue – which the actors deliver with careful pronunciation – is period without being too archly stuffy, there is a moving statue – who is mainly naked and pees in one scene, there is no romantic love involved and one can’t mentally drift off or fast forward at the risk of missing something. In short, there are many reasons this film won’t appeal to a broad audience. But if you’re looking for something lovely to look at, beautiful to listen to and a puzzle which will keep you wondering and thinking – and rethinking – on what you’ve seen, this one is superb.