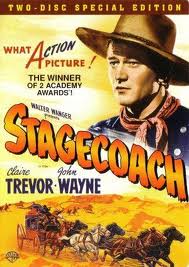 I’d heard about this movie for years. But somehow I’d managed to miss seeing it until very recently. When I watched it, I finally understood what makes it great. This is the film that got John Ford back directing Westerns. It introduced Monument Valley’s gorgeous vistas to moviegoers. It took an accomplished group of actors and turned them into a great cast. It’s got some cool social commentary. And it gave John Wayne his vehicle to become a star. Silly me didn’t realize all this and thought it was just a Western.

In a small, dusty western town, an Overland stagecoach is preparing to continue its journey to Lordsburg. On board are a variety of people – the driver (Andy Devine), a Marshall (George Bancroft) who is riding shotgun because a man has escaped from jail and is believed to be headed to Lordsburg on a vendetta, a whiskey drummer (Donald Meek), a drunken doctor (Thomas Mitchell) and a lady of the evening (Claire Trevor) who’ve both been run out of town by the morality league, an Army wife (Louise Platt) traveling to meet her husband, a gambler (John Carradine) and the town banker (Berton Churchill) who catches the stage just as it leaves town. 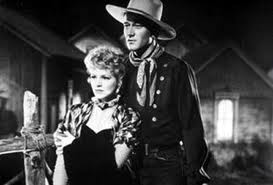 Before they head out, the Marshall makes the announcement that Geronimo and his warriors have left the reservation and that before the telegraph lines were cut, the beginnings of a warning were received. Anyone continuing on is traveling at his or her own risk as the contingent of soldiers with them will not continue all the way to Lordsburg. Not long after, the stage stops and picks up the Ringo Kid (John Wayne), the man wanted by the Marshall, whose horse has gone lame. The cast for the journey is now complete.

The stage continues farther away from “civilization” and deeper into danger. At various times, the party votes on whether to continue or go back. Reports of burning ranches and the loss of the soldiers, who are headed off in another direction, add to the tension but the stage and its passengers press on. It’s as dangerous to head back or stay as it is to continue. A surprise occurrence holds them up before they reach the ferry only to discover it’s been burned out as well. After a perilous river crossing, they finally begin to relax thinking they’ll soon be safe but as the stage reaches the dry river flats, they’ll have to fight for their lives in a 9 minute “hell for leather” race from the Apache.

Is that the end? Far from it as the climax of the film is actually not the stagecoach racing to safety but rather the showdown in Lordsburg between a man out to avenge the deaths of his father and brother and the bully boys responsible. Is there a chance for the Kid with odds of 3:1? And if he survives, can he finally persuade a fallen woman that they have a chance at happiness? 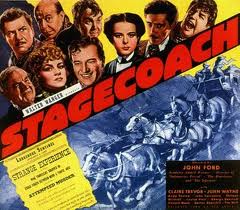 The film is a road movie that mainly centers on the evolving relationships of its passengers. The chase and final main street showdown are great but most of it is a character piece – who are these people? Why are they there? What are their interactions. How do they change over the course of the film? Who is stronger, kinder, more understanding, more forgiving? It’s also got a delicate and lovely romance – one which had me holding my breath and hoping until the final scene of the movie. On the commentary – which should be listened to only after watching the film – it’s called the growing love between a good, bad man and a good, bad girl on a stage which is a literal and figurative vehicle.

Ford gives economical, thumbnail introductions for all these characters but we really don’t need more than that. Their actions and interactions throughout the film will tell their stories. The characters are both strong and weak, often starting weak but gaining strength and redemption through the fire of their experiences. Watch for the shifting social lines and alliances between the passengers as the film progresses “Stagecoach” is also a triumph of the underclass and outcasts of society with a whore, a wanted man and an alcoholic being allowed to be seen sympathetically while the socially righteous are seen to be sanctimonious biddies. I had to laugh when thinking of how the holier-than-thou wife of the banker will react and be perceived once her husband’s actions are known. And since the film was released in 1939, I can’t help but feel that the audience – having lived through the Great Depression – would revile the crooked banker almost as much if not more than his fellow passengers would in the 1880s. 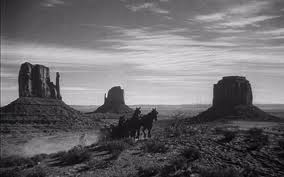 “Stagecoach” was filmed in black and white but I don’t miss color at all while watching it. The scenes are beautifully set up and shot from the claustrophobic interior sets to the wide open Monument Valley. The lighting highlights expressions, groups characters and heightens the tension in the final section as Dallas the whore almost crumbles with shame for Ringo to finally learn exactly who and what she is during a walk through Lordsburg followed by Ringo facing down the three men who gunned down his family. The unneeded parts of the background are shadowed out leaving the focus on whatever action is occurring then.

But let’s get back to the romance. It’s more sweet and subtle than blazing. Dallas almost can’t believe that any decent man would be interested in her while the Kid – whose real name is Henry – sees only her true worth from the first moment he sets eyes on her. There is a ton of silent but significant glancing going on here. One of my favorite moments is after the group has to stop for the evening and Henry sees in Dallas a woman with whom he could build a life and raise a family. His quiet, courtly manners towards her put those of the “gentleman” gambler to shame. He also proves that he’s not a man to go back on his word – he’s asked her to marry him and nothing about her past will ever change his mind. The world at large may condemn her for the way she managed to survive after the death of her parents but he never will. Meanwhile Dallas shows herself to be the true lady of the group in that she repeatedly offers help and assistance to the others despite their initial snubs. By the time the group breaks up in Lordsburg, she’s won the admiration of all. Trevor was already a star – the highest paid of the film – but this, despite the fact that he doesn’t appear until 18 minutes into it, is the film that finally propelled Wayne to stardom. The other passengers are certainly worth mentioning as well. Thomas Mitchell won an Academy Award for his performance as the genial, drunken doctor who was delighted to sample the wares of the drummer during the trip and who summoned all his courage to try and even the odds a bit for the Kid. Donald Meek stays true to his name and once again portrays a self effacing milquetoast of a man. George Bancroft is the Marshall who at first appears to be taking the Kid in for the reward but who quickly reveals his true reasons for doing so. He’s also the one who gives true love a kick in the pants to get it started towards the border. My favorite secondary player is probably squeaky voiced Andy Devine urging on Bessie, Belle, Blacky and Bridesmaid.

I would be remise in not talking a little about the ethnic characters in the picture. Are the Indians portrayed as the villains? Yes, they are. There’s no getting around that. Are they vilified? Honestly, I think not. Feel free to disagree with me. I will say that for a film made in 1939, this was probably about as good as it was going to get. Plus at least the Hispanic and NA/Indian characters are played by actual ethnic actors – true, most of the Indians are Navajo and not Apache but at least they’re not Caucasians in red face and atrocious wigs. 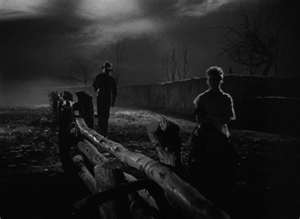 Ford packs a lot of movie into 96 minutes. It’s a Western, it’s a romance, it’s a commentary on society, it’s an action adventure complete with edge of your seat stunts (one of which inspired a similar one in Raiders of the Lost Ark) and a cavalry charge to save the day. It’s beautiful, it’s tender and it’s inspired countless other films since its release. If you haven’t seen it, give it a go. If you have, enjoy it again. It’s well worth it. A