Say Anything
Genre: Coming of Age Romance
Grade: B+ 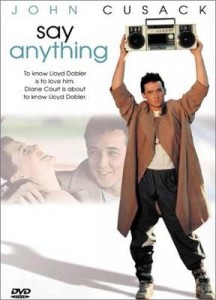 How did I miss this? Srsly, where was I? Dunno. I’ve heard about the “holding up the boom box” scene. I’ve seen it on so many “Gawd, these are the best films evah!” lists and heard from so many people that “you have to see this film, I mean it!” that I should have seen it before now. But it took doing these reviews and scanning Top Films lists for more film ideas to finally make me do it.

No one thinks Lloyd Dobler (John Cusack) and Diane Court (Ione Skye) will ever last. In fact, everyone’s surprised they ever got together in the first place. Including them. The first time Lloyd asks Diane out, she says yes then has to check their recent senior high school yearbook to even know who it is she just agreed to go to a party with. But as their relationship progresses, they find something special. She feels totally comfortable with him and he starts to trust in himself because of her.

Then things start to go wrong. Her father (John Mahoney) is being investigated by the Internal Revenue Service and the time before she’s due to leave for a prestigious fellowship in England is ticking down. Diane feels with all this going on, that she doesn’t have time for a romantic relationship and reluctantly breaks with Lloyd. Which devastates him. But he keeps trying until he finally accepts it’s the end. Or is it?

Lloyd is every woman’s dream guy. Or he ought to be if she’s worth having. Diane tells her father that on their first date, Lloyd stopped her and steered her around some broken glass on the pavement so she wouldn’t hurt her bare feet. And it’s this moment that she thinks of every time someone asks her what she’s doing with a guy like Lloyd. Lloyd is considerate, he’s a gentleman, he looks after his friends and even drunk people he’s never met before when they’re stranded at the party with no way to get home.

No, he doesn’t know what he wants to do with his life but he’s honest about that instead of bullshitting some answer just to make the grownups feel better. And he loves Diane and loves being with her so much that after the first time they make love, he’s shaking. And then there’s the scene where he puts it all out there with music for everyone to know how he feels about her.

And I kept waiting for Diane to mess with him. To tell him that he’s not good enough for her brainiac “I have this fellowship” self. But she doesn’t and her reason for breaking with him, though it hurts him, is more what is going on in her life than anything she feels or doesn’t feel about him. And since she’s going through a lot with her beloved father accused of crimes and she’s about eighteen, I’ll cut her some slack. Which as I get older, I’m less and less willing to do so that says something to me about how good this movie is.

When her world caves in around her, it’s Lloyd she runs to. It’s Lloyd she needs and wants and God bless him, he’s there for her. He’s holding her hand on the plane, helping her over her fear of flying as they wait for the ding. Those of you who’ve seen the movie will know what I’m talking about and it’s an incentive for those of you who haven’t. Probably only three of you since I’m so behind on seeing this.

The secondary cast is outstanding. Mahoney plays the father who Diane feels comfortable saying anything to and who we’re not sure about until the end. Lili Taylor is one of Lloyd’s female friends who already realize what a gem he is. Eric Stoltz and Jeremy Piven, among others, are Lloyd’s guy friends who think he’s cool and offer guy advice. Cusack’s real sister Joan plays his sister here and Glenn Walker Harris, Jr is Lloyd’s nephew and fellow kickboxing enthusiast.

I think Cameron Crowe does an awesome job directing this and letting us see these two falling in love and just enjoying being with each other. As the plane takes off for England, I don’t see two totally different people heading off together who probably won’t last in the long run. I see two people full of hopes and dreams and belief in each other. And these lines nail it.

Diane: Nobody thinks it will work, do they?
Lloyd: No. You just described every great success story.

There’s a 20th Anniversary edition DVD due out in November which is supposed to have cool stuff – though from what I’ve seen, the original DVD has about all the same cool stuff already. Maybe they’ll work on the crappy subtitles…

Anyway, if you haven’t seen this – try it. If you have seen it, maybe you feel, as I do, that this is more than the usual 80s teen “angst filled” “nobody understands us” film. This is one that makes me happy even at my creaky middle aged age.

FTC discloser – I rented this from a movie rental service.