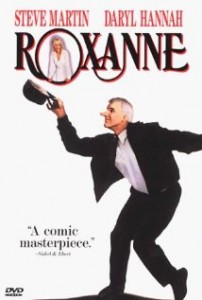 When I reviewed “Cyrano de Bergerac,” some of you said you couldn’t watch or didn’t want to watch it or hated it because of the tragic ending. I can understand that. More often I’m in the mood for a HEA too. So here one is in the form of an updated version of Edmond Rostand’s famous story. And this time, the right guy gets the girl.

Fire department chief C.D. “Charlie” Bales (Steve Martin) is a great guy. He’s charming, witty, friendly, kind, intelligent and caring. He’s also got an incredibly huge nose. When he meets summer resident and astronomy student Roxanne (Daryl Hannah) he’s smitten but she’s only got eyes for new handsome fire fighter Chris (Rick Rossovich). Chris is also hopeless when it comes to interacting with women and frustrates Roxanne by refusing to talk to her. So she asks C.D. to help them, not knowing of his feelings for her. Will C.D. ever work up enough courage to tell Roxanne what he feels even as he vicariously woos her for his friend? If you know anything about the original story, you’ll notice how cleverly this remake/update works those details into the plot. C.D. is great with words as shown in the “20 insults” scene at the bar when he chastises someone who insults his nose then goes on to spontaneously come up with 20 much more clever things the man could have said. They aren’t delivered as a poem but still show C.D.’s superior intellect. Roxanne is an astronomer which was a hobby of the original Cyrano. C.D. shows his fencing skill not with a sword but a tennis racket – the scene is hilarious. Instead of whispering the words to Chris to woo Roxanne with, C.D. initially uses a short wave radio with a transmitter hidden under a cap Chris wears then finally resorts to charades and pantomimes.

There are several people in town who act the part of C.D.’s friends as well as the other fire fighters who stand in for the Gascogne cadets. There’s a funny scene of C.D. falling out of a tree as he spies on Roxanne only to almost land on top of four older ladies. He spins a story about having almost been abducted by aliens which resembles the “man falling from the moon” tale told by Cyrano to the jealous Comte – which is one subplot that is otherwise dropped in this version of the story. But never fear, if you haven’t read the play or seen other Cyrano movies, you won’t feel like you’re missing things or are being left out of the inside jokes.

As with any telling of the Cyrano story, the main emphasis is on the man himself and thus this is really Steve Martin’s movie. He does great physical as well as verbal comedy. I don’t think he did all the gymnastic entries into Roxanne’s rental house but he does fence with the tennis racket, act out the aliens, and leads his volunteer fire fighters in proper hose technique then waltzes to their efforts – you have to see that part to appreciate it. Martin tones down his wackiness – often it’s the other characters who take this up – and instead gives a charming, sensitive performance.

Daryl Hannah is lovely as Roxanne is supposed to be but also pulls off the job of being as intelligent as this character is portrayed. She’s still dazzled by a pretty face but now gets a scene of anger at the realization of the scam pulled on her and finally – for this character – sees beyond the physical to the true worth of the man who has loved her from afar. As for the pretty face, Rossovich is more than cute as the tongue tied, airhead Chris and I ended up still liking him despite the shallowness – he had to be gotten out of the way – of his character here. Shelley Duvall, Fred Willard, an early Damon Wayans, and – my favorite – Michael J. Pollard are some of the secondary actors who all do good jobs. Oh, and there’s Flossie the cow and Grover the cat who is the one responsible for Roxanne and C.D. meeting in the first place. Lots of historical stories which are updated and presented as contemporaries fail to work for me. Many of the plot details just don’t fit in the modern world or the work arounds are so cumbersome that it makes the whole thing to clunky and unbelievable. Here I think the filmmakers have done a great job of keeping the basics, updating some of the details and jettisoning what would have ground the story to a halt. And even though the film is almost 25 years old, it doesn’t feel 80s dated either. Wooh – twofer! For those who don’t like Cyrano due to the unhappy ending – here ya go. B

→ Jayne
Previous article: REVIEW: Always the Bridesmaid by Nina Harrington
Next Post: What Jia’s Been Reading, Week of August 16