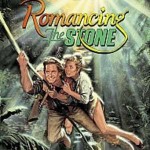 Way back in the mists of time when I first saw this movie with my college friends, we loved it immediately. Over the intervening 26 years, it’s lost none of its charm for me. Though the sequel is humdrum forgettable, the original is something to see if you haven’t already.

Joan Wilder (Kathleen Turner) is a NYC based romance novelist (!) who writes best sellers set in the old west featuring Angelina and her beloved hero, Jessie. Wilder lives in hope that one day she’ll meet her special someone but in the meantime, she’ll celebrate finishing her latest book with her beloved cat Romeo. But her beige existence is about to be kicked into overdrive when her widowed sister in Colombia (Mary Ellen Trainor) is kidnapped by two cousins (Danny DeVito and Zack Norman) who are after a treasure map mailed to Joan by Eileen’s husband before he was murdered.

Though terrified of travel, Joan heads off to Colombia where she boards the wrong bus and gets stranded in the countryside with a sinister character, Zolo, (Manuel Ojeda) who is also after the map. It’s then that shady entrepreneur Jack T. Colton (Michael Douglas) comes to her rescue and agrees (for $375 in American Express Travelers Checks) to help her get to Cartegena. But with the cousins plus Zolo and his private henchmen after them, will Joan and Jack be able to find the treasure of the map, save Elaine and realize their growing romance which is straight out of one of Joan’s novels?

From the music of the opening credits (after the prologue during which we see the ending scenes of Joan’s newest novel), I could tell this one was going to be a fun trip. Joan is so bland and buttoned up that she just has to break free and go wild before the end – which she does. One thing I really like about this film is that Joan grows in confidence and she does most of it on her own. Yes, Jack initially saves her from Zolo and keeps her going in the jungle but she gets stronger through her own actions and ends up saving herself and Elaine. She also realizes that Jack is not the dream hero of her books, as she initially wanted him to be, and accepts him – warts and all. Turner was at the height of her sexiness in 1984 yet manages to make me believe in her little mouse persona before blossoming into the woman who takes Jack’s breath away.

Meanwhile, Jack’s character begins as someone in it for himself and what he can get from Joan. Sure he holds off Zolo and Co. with dashing hero verve – well, except when he slams into the opposite side of a canyon as they’re escaping – but he’s actually an anti-hero who morphs into someone worthy of Joan. I can see him falling for her as the film progresses and his final gesture is worthy of a romance book hero. Douglas manages to make Jack charming and sexy before showing us that he’s smitten and trying to be a better man for his heroine.

Danny DeVito steals almost every scene he’s in as the crook forced to trail the duo through “this third world toilet” while also trying to avoid Zolo and the local cops who’d probably give him a “close encounter with a cattle prod” if they realized who he is. The other supporting actors are fine but definitely supporting these three. Of them all, Alfonso Arau as Juan the drug dealer who reads all of Juanita Wilder’s books to his cronies, is perhaps the funniest.

The movie is almost nonstop fun and action – the mudslide down the mountain ought to be a ride at Universal Studios as well as vine swinging across the river ravine. The cast appears to be having a ball in it. If you want to just kick back and bask in light and effortless entertainment, there aren’t many pictures which are better at it.