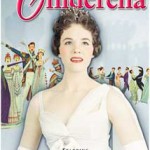 If, like me, you are of a certain age and watched US TV, you probably grew up watching the 1965 version of Rodger’s and Hammerstein’s “Cinderella.” Before VHS tapes or DVDs the only way to see it was the annual TV broadcast. Every year I’d eagerly anticipate it, sit entranced during it and then feel let down that I had to wait another year before seeing it again. Not anymore though thanks to modern technology and youtube! Now I can listen to “Do I Love You Because You’re Beautiful,” “Ten Minutes Ago,” “In My Own Little Corner,” “Impossible,” the Gavotte, “Stepsisters’ Lament” and “A Lovely Night” any time I want.

In these versions of the story, they stick pretty much to the basic rendition of the classic fairy tale. Sweet and kind Cinderella slaves away for her selfish stepmother and stepsisters – cooking, cleaning, sewing, ironing and whatever else they demand all while escaping in her imagination “in her own little corner in her own little chair.”

Meanwhile the Prince returns after a year of dragon slaying, princess saving and vanquishing magicians but still hasn’t found a woman he loves. In order to goose him into doing his duty, his doting parents decide to host a ball so he can hopefully find a bride. As announced to the country “His Royal Highness Christopher Rupert Windimere Vladimir Earl Alexander Francois Reginald Lancelot Herman…” “Herman?!” “Herman! Gregory James” is giving a ball.

The stepmother and stepsisters, along with all other women between the ages of 16 and 60, head off on the night of the ball leaving poor Cinderella to dream and wish of going herself. Her wishes are answered when her Fairy Godmother arrives, waves a magic wand and transforms a pumpkin into a golden carriage, mice into horses, rats into a coachman and footman and Cinderella’s rags into a beautiful dress and glass slippers. Off she goes to enjoy herself with the warning ringing in her ears to be gone by the stroke of midnight.

While at the ball, she dazzles the Prince and the whole ballroom of people watch as the two dance and fall in love. But heedful of the time, she dashes off as the clock strikes 12 leaving only one glass slipper behind. The distraught prince vows to find her then, along with a long suffering herald he heads off to try the slipper on every maiden in the kingdom. 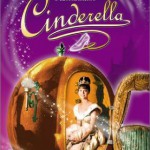 Finally after countless feet, they arrive at the cottage where the simpering stepsisters fail to shove their feet into the shoe. About to leave, the Prince sees Cinderella, gives the slipper one last fitting and finds his love.

The version I grew up with is the 1965 Lesley Anne Warren one. By the time Whitney Houston and Brandy redid it in 1997, I thought I was past watching fairy tales and so never sought it out. And to my chagrin, I didn’t even realize until recently that Julie Andrews was the first Cinderella in 1957. After a whirlwind tour of the different presentations, I have to say that the all have their pluses and minuses.

For the most part, the scripts and songs are the same. A few differences I noticed are the 6 minute overture start to the 1965 one plus a song sung by the Prince at the start which is haunting as he yearns to find his true love. In 1957, Cinderella’s Fairy Godmother is someone she’s known for years and it’s Cinderella’s idea to use the pumpkin and mice. While in 1997, the dance numbers are longer, they add some songs from other R&H productions, the Prince’s herald has a much larger role and the cast is multiracial.

The 1957 broadcast was live, shown in black and white, and presented on a real Broadway stage. The picture is a bit grainy but the sound is actually pretty good and what they were able to accomplish in the small amount of space they had is amazing. Most of the vocal talent is good while Julie Andrews is, of course, simply wonderful to listen to. I did laugh as the FG wields her wand like a Texas baton twirler and there are two goofs done by the actor playing the Prince. But overall, this one is worth seeking out if only for Andrews’ voice.

By 1965 color had arrived on TV but the simplistic sets still seem based on a stage play. The costumes have this pseudo-medieval feeling going complete with horned headdresses for the ball. Oi. Lesley Anne Warren seems very young compared to everyone else and her wide-eyed portrayal ends up making her look more goofy to me than I remember. While the vocal talent is fairly even, it’s also fairly mediocre with the surprising exception of Stuart Damon as the Prince. The ball sequences still make me smile though as I watch Cinderella’s lovely – if heavy – dress swirl as she dances with her prince. 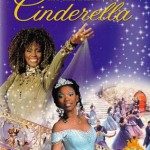 For the 1997 edition things really got jazzed up. The fantastic sets are something out of Disney meets Mackenzie Childs and are drenched in color. After watching the ‘making of’ featurette, I see that the cast fell in love with them as quickly as I did. The vocal talents of Houston and Bernadette Peters as the stepmother are outstanding which makes me wish that the rest of the cast were nearly as good. I love the message that Cinderella is worthy besides just having a beautiful face, dress and access to a FG. But the aspect of this version that really makes it for me is the multiracial cast selection. After all, if you’re willing to believe in pumpkins becoming carriages and mice getting turned into horses, what’s the stretch to a Caucasian King and an African American Queen having a Filipino son?

While none of the three variations are flawless for me, I did enjoy watching them all. The 1957 and 1997 ones are readily available on DVD and youtube. The challenge is finding the 1965 edition as the DVD is OOP. There are fairly cheap used VHS tapes to be had though the prices for the used DVDs are steep. The sheer number of times this musical has been redone is testament to its popularity and I found myself singing along with old favorite songs. I’ve also had fun mentally regrouping the various actors and elements from all three to create my perfect version. Give them all a try and see which one works best for you.