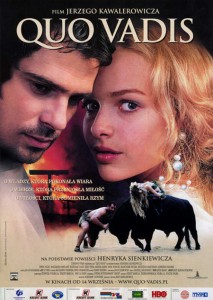 Yes, the dates are correct. This is a dual review of the famous 1951 Hollywood version and a Polish version made in 2001 which was also released as a six part TV version in 2002. I saw the Polish TV version which clocked in at almost four hours (note if you get this from Netflix as I did, they have it marked as 4.5 hours) while the 1951 movie is almost 3 hours. So word to the wise: allow some tush refreshing time. I know that there will probably be some people who don’t want to read a review of a Christian themed movie – well, then just skip this week and wait for the next. But spring is here, ’tis the season of religious movies and I could have inflicted Ben Hur with Charlton Heston’s wooden acting on you.

From what I’ve read about the 2001 version, it’s much closer to the book, written by Polish author Henryk Sienkiewicz. The ’51 is close but has a few differences. On his way back to Rome, Marcus Vinicius (Pawel Delaq looking like a young and very hot James Purefoy/Robert Taylor) rests and recuperates/is forced to stop outside Rome at the home of Plautius (Piotr Garlicki/Felix Aylmer) and Pomponia (Danuta Stenka/Nora Swinburne) an older couple looking after Lygia (Magdalena Mielcarz/Deborah Kerr) a political hostage of Rome. Marcus falls for her like a ton of bricks and returns to his uncle Petronius (Bouslaw Linda/Leo Genn) all afire to have her. Together they scheme to get her custody awarded to Marcus so he can take her as a concubine but when Lygia realizes what’s up, she works with Akte (Malgorzata Pieczynksa/Rosalie Crutchley), Nero’s (Michal Bajor/Peter Ustinov) former mistress – who is an almost convert to Christianity – to escape what to her as a Christian is a fate worse than death. Marcus, who is dangerously and 1980’s alpha-ly obsessed with possessing Lygia, goes nuts and hires a weasely Greek PI Chilo (Jerzy Trela/John Ruddock) to find her. Once while Marcus was with Lygia at her guardian’s house, she made the sign of the fish and from that plus his earlier acquaintance with a man named Glaucus (Andrzej Tomecki) – also a Christian – Chilo knows who to bribe and how to lie to get the information he needs. But Marcus’s attempts to kidnap Lygia go horribly wrong and he ends up wounded and at the mercy of the Christians with whom Lygia is living.

It’s then that he begins to learn about the religion they’ve all converted to and watches their faith in action. He’s still not convinced about it but woos Lygia, who already loves him, and wins her hand. Meanwhile Nero inflicts his songs and poetry on his poor select circle and Petronius neatly walks a verbal tightrope of praise in person and disparagement behind Nero’s back. In search of inspiration for his poem on the burning of Troy, Nero is delighted when news reaches him that Rome is burning. Every great artiste needs a real life model, doncha know. But the populace of Rome – post conflagration – demands vengeance and Tigellinus (Krysztof Majchrzak/Ralph Truman) the leader of the Praetorian Guard plus Poppaea (Agnieszka Wagner/Patricia Laffan) cheerfully suggest the upstart sect who won’t acknowledge Nero as a god. For a villa of his own, Chilo happily betrays everyone he knows including Lygia. Yes, it’s time to throw the Christians to the lions. Or crucify them. Or burn them. The fun goes on for days. As the citizens of Rome settle in for the spectacle, Marcus and Petronius work furiously to free Lygia but Petronius has fallen from favor and it takes Lygia’s bodyguard Ursus (Rafal Kubacki/Buddy Baer) saving Lygia from death a la Dirce to turn the mob in Marcus’s favor and (2001) force Nero to pardon her/(1951) when Nero refuses to pardon them it brings about his downfall. In a compression of history, Marcus, Lygia and Ursus hotfoot it out of Rome while Petronius beats the execution warrant headed his way, Nero orders Poppaea killed then has to flee and commit suicide when he loses power. At different times, depending on the version the Apostle Peter (Franciszek Pieczka/Finlay Currie) encounters Jesus while leaving Rome and asks “Quo Vadis Domine?” After which he turns and heads back to Rome and his fate.

I think these could be watched as historical films but the main emphasis is on religion. Yet though the religious theme is all pervasive, one of my favorite characters is Petronius who is always willing to poke a little fun at the all too serious Christians. Nevertheless, there are lots of scenes of Christians acting like they ought to – forgiving those who have wronged them, not taking life, etc – behaving, well, like Christ taught and thus converting more and more Romans to their way of believing. Care has been taken with the scenery and costumes though some of the sets have more of a “closed in” soundstage look in 2001. The 1951, filmed in Rome, is all spectacle with its 30,000 extras and costumes. I could kiss whoever did NOT have stirrups on the 2001 saddles. Plus there is a bull and lots of real lions! The stories of how they got and filmed the lions in 1951 are a hoot. Apparently the picky cats thought the arena too hot and rushed back to their cages. It took meat stuffed costumes to get them out. In 1951 the bull also escaped and caused havoc on the set. But in either version the scenes don’t look half bad. I’m not sure what arena the games are supposed to be in as the famous Colisseum wasn’t built then but in both it looks nice and cozy with a bird’s eye view of the action. The 2001 burning of Rome was anemic and without all the panic I would have expected. I guess the budget just didn’t extend quite far enough. On the other hand, the beautiful shots at “Antium” make me want to build a villa there too. But for the ’51 movie, all stops were pulled out and Rome burned, baby, burned. The extras also look more like people who don’t want to be crispy critters for Nero’s art rather than people merely headed out for a quart of milk at the Quickstop.

As I alluded to earlier, I love both Boguslaw Linda’s and Leo Genn’s portrayals of Petronius. He can slyly lie to Nero without coming off as two faced and enjoys a small romance of his own with a slave named Eunice (Marta Piechowiak/Marina Berti) who loves him and joins him in death. Berti plays it more cloying and at times I winced as she almost worshiped her master. Bajor looks a bit like the busts of Nero and gives a convincing portrait of a spoiled brat who thinks “it’s all about me. Why can’t people understand my frustrated artistic soul?” Ustinov, true to what’s said about him, chews the scenery to bits and also seems a little more psychotic. I liked Laffan’s Poppaea better. Her role is bigger and plays the central part in why Lygia is singled out in the arena. Plus she has two cool pet cheetahs!

Another major change between 1951 and 2001 is Chilo. In the Hollywood version, he’s barely there but played by Trela, who initially was in it for whatever he could scam and squeeze, he turned out to be one of my favorites in 2001. I’m not quite sure I buy his conversion at the end but his smarmy beginning is great. 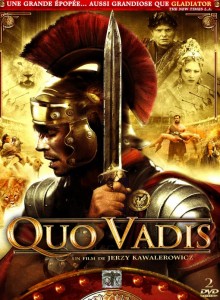 Delaq does a good job going from an obsessed soldier who’s been refused a human toy he wants to a man who weeps when he’s baptized and who is willing to risk his life to save the woman he loves. Taylor is, I think, a little old for the role and his pursuit of Lygia seems more rote than passionate. Mielcarz is a truly lovely Lygia but sometimes comes off like butter wouldn’t melt in her mouth. Mostly she seemed little more than a pretty face and it’s obvious she hasn’t much acting experience. Kerr on the other hand turns in a better performance and shows more of the woman torn between her love for Marcus and her religious principles. As Bill Clinton said, I could feel her pain. 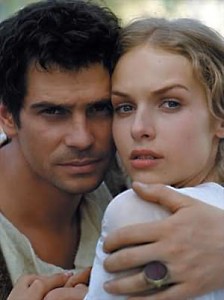 The 1951 version has more of a “gee look at this amazing spectacle” feel rather than one focused on the characters as in 2001. Though for that one, I could have done with less attention to inventive ways to kill people and a punched up burning of Rome. Still there is something to be said for a 1951 Hollywood cast of (ten) thousands and a desire to razzle dazzle people back into the theater. From what I’ve heard, the ’51 movie was also supposed to be seen more as a commentary on WWII and the then postwar world instead of as a religious epic. But whichever version you watch, be ready to take some breaks as they are long. B-