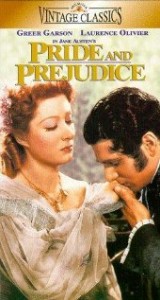 What?! A grade less than fabulous for one of Jane’s masterpieces? Sorry but yes. While I enjoyed some aspects of this interpretation there are just too many eye popping, “oh, tell me they didn’t just do that!” issues for me to overlook. Had I seen this before some of the more recent TV/Film versions of the story, I would probably have cheerfully overlooked or not even noticed the face-palm moments but as it is, Hollywood did a number on it.

“Mr. and Mrs. Bennet have five unmarried daughters, and Mrs. Bennet is especially eager to find suitable husbands for them. When the rich single gentlemen Mr. Bingley and Mr. Darcy come to live nearby, the Bennets have high hopes. But pride, prejudice, and misunderstandings all combine to complicate their relationships and to make happiness difficult.”

With a running time of just under two hours, some things have to be cut or combined in order to hit the high points of the plot. The film opens with Mrs. Bennett, Jane and Elizabeth picking out fabric for new evening gowns for the local Assembly dance when out of the shop window they see the arrival of a fine carriage conveying the new inhabitants of Netherfield through Meryton. Mrs. Bennett wastes little time in finding out who the two gentlemen are and – more importantly, that they’re not married. She and Lady Lucas are like two bloodhounds on the scent which results in a funny carriage race between the two sets of women in order for them to get their menfolk to call at Netherfield first. At the Assembly Ball, a compression takes place with Elizabeth meeting and flirting with Wickham after a smouldering and haughty Darcy initially denigrates the assembly then reluctantly asks her to dance. The Bingley Ball is transformed into an afternoon garden party while Jane’s trip to London is removed altogether. We get the full impact of Melville Cooper as Mr. Collins annoying the Bennets with his bumbling presence before his cackhanded proposal to Elizabeth then the film fast forwards to her trip to see the newly married Charlotte. Lady Catherine de Bourgh is as condescending as ever but Elizabeth’s trip to Hunsford appears to be shortened and she travels back home with the Collins where they discover Lydia’s elopement with Wickham.

The entire Lake Country trip is eliminated, Georgiana never appears and Elizabeth only learns of Wickham’s true past with the Darcy family after Darcy appears at Longbourne to offer his services in finding Lydia. After he leaves, Elizabeth confesses his proposal to Jane and admits she loves him. A rather lengthy time elapses before Lydia and Wickham are found during which the Bennetts prepare to move to another part of the country to escape the condemnation heaped upon them due to Lydia’s behavior. Lady Catherine shows up at Longbourne only minutes after the Wickhams to rake Elizabeth over the coals and then proceeds to do a 180 degree turn from the novel after which both Darcy and Bingley show up and propose to their lady-loves. 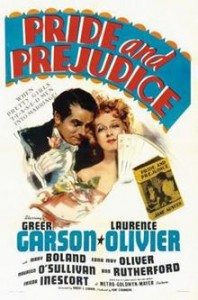 As I said, if I didn’t know what was supposed to happen, these cuts and changes wouldn’t have bothered me. As it is, I can actually live with a lot of the cuts and compressions since the high points of the story are still maintained. One cut actually works better for me. In the 1995 version, Elizabeth doesn’t begin to change her opinion of Darcy until after she sees his magnificent house which in my opinion always made her appear a touch mercenary after her lofty arguments turning down his initial proposal. Here, she starts to change – or admit her change – after Darcy unselfishly reveals the true reasons behind his dislike of Wickham and nobly offers to help find Lydia. What I absolutely did not like is how Lady Catherine de Bourgh’s character and her actions are changed at the end of the movie. When her real motives for visiting the Bennet family at Longbourne are revealed, it somehow lessens Lizzie’s verbal jousting triumph. Darcy’s final proposal also melts into mushiness and seems out of character. Yes, I expect true love from him but not sappy, puppy eyed emotion.

The 1830s costumes are another issue with this movie but at least they stay consistently off throughout the film. Meryton is also as perfect as only a studio backlot could be. Perhaps the clodhopping dancing at the Assembly Ball is supposed to show how far from London high society the Netherfield party is but my sneaking suspicion is that Hollywood simply couldn’t be bothered to have these people look polished. And while we’re wearing clothes from the wrong era, we might as well throw in some period incorrect dances such as the polka and mazurka while we’re at it. The background music is typical of a movie made at this time tending towards lush violins and sap. I find the casting fairly good except for the fact that Garson looks too old as Elizabeth. Other than that, I think she does a good job in the role. But can someone tell me, does Lizzie resort to tears as much as is shown here? Olivier is as haughty as anyone could want – for the first half of the film. But after that he tends to show his emotions a touch too much with his “My Darling” proposal and public smooch. In private with Elizabeth? – sure, show me the passion. In front of everyone else? – not so much PDA. I don’t have any complaints about the other actors and particularly enjoyed Melville Cooper as Mr. Collins and Edna Mae Oliver as Lady Catherine – even if I don’t like how her character was changed. Mary Boland does a nice flighty Mrs. Bennet while Edmund Gwenn does a serviceable Mr. Bennet. I did keep expecting Maureen O’Sullivan to show up in a leopard print short dress, though.

Given what I’d heard about this version, I actually ended up liking it more than I thought I would. I’m not such a Austen purist that I can’t enjoy what’s here but I can’t help but wish that they’d at least done a better job with the costumes. The essence of the plot is retained though it seemed to me that Hollywood was going for a more screwballish first part and melodramatic ending. Taken for what’s actually here, it’s okay. As a faithful adaptation of the book, I think there are better ones to see.