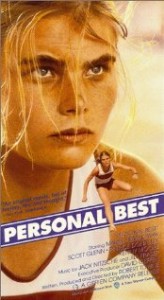 I remember almost nothing about this movie when it initially was released but I got it in my head to try and find some movies about the Olympics and discovered that there aren’t too many Summer Games ones that could fit the bill. So, crossing my fingers I rented it from Netflix. Opinions on it seem to be all over the place from greatest depiction of athletes at sport to cheap exploitation of women to boring. My own thoughts are a mix. Some parts work well while others almost put me to sleep. While at a track meet, pentathlete Tory Skinner (Patrice Donnelly), spies Chris Cahill (Mariel Hemingway) running the hurdles. Impressed with her talent, Tory brings Christ to the attention of her coach Terry Tingloff (Scott Glenn) who only reluctantly allows the younger woman to begin training with his athletes. As the two women become closer in their personal lives, they must try to balance the desire to win in the Olympic trials against their love for each other.

The sports part of “Personal Best’ is my favorite aspect of the film. Let me just say first that I enjoyed listening to the commentary track more than initially watching the movie the reason being that the director, Robert Towne, and Glenn speak a lot about what went into making that part realistic. Many of the incidents came from what US athletes told Towne actually happened to them at meets and during training. Glenn spent months with a top track and field coach, Donnelly is a former athlete at this level and Hemingway trained with top athletes for almost a year to get her moves right. It all pays off with realistic performances that are enhanced by having actual athletes acting in the film and competing on camera. Yet there are almost documentary moments throughout that drag and could probably have been cut or shown in a quick montage instead. Which gets me to what didn’t work for me and that is the relationship between the two women. It’s not because watching two women squikes me out. It’s because Mariel Hemingway can’t act her way out of a wet paper bag. Patrice Donnelly is better and she was cast because of her athletic ability. As the film progresses, I started to play a game with myself trying to guess if – at the pivotal part of any particular scene – Mariel would end up crying or whining or both. It seemed to be all she could do and it unfortunately reduced the romance to something out of teenagers in high school. Scott Glenn then adds his usual taciturn assholic performance on top of that. There’s a scene when he yells at Chris to get her to suck up and start taking her sport seriously and I was cheering him on. After watching her pout and whinge there came a point when if I could have taken a high jump bar and beat Hemingway’s Chris I would gladly have done it. “Just. Shut. Up!”

In the commentary, Towne asserts that the famous sauna scenes were for authenticity and that he asked all the women if they were uncomfortable and offered to drape towels and shoot from specific angles if they wanted. He also volunteered the mostly male crew to film the scenes naked if the women felt that was more fair. He says the toned athletes took one look at the flabby crew and turned that offer down flat. Still there are lots of other scenes in the movie that had me shaking my head at the way Towne filmed them and the number of shots he used. Case in point is a section where the women are training for the high jump using the Fosbury Flop technique which involves them twisting and going backwards over the bar. The camera zooms in from their lower abs to their upper thighs and we get multiple views of wide legged back flops. I can only imagine what this looked like on the big screen and wonder why the director chose not to show them from the side or at least show their entire bodies instead of zeroing in on the crotches. Yet Towne also offered equal opportunity nudity with a frontal of Chris’s boyfriend at a late point in the film. I wish that a stronger actor than Hemingway had been caste because I do like the low key way Towne directs the love scenes – as if there’s nothing wrong here, nothing out of the ordinary, nothing different from a heterosexual romance in this depiction of lesbian love in a 1982 movie. However this low key approach also works against the film and I’m going to go split personality to explain my feelings. It avoids the usual heightened sensationalism and heart tugging scenes that so many sports films rely on and that I usually loathe. You know, the “soaring music” moments designed to make you tear up and cheer at the same time. When you are blatantly manipulated to have “feel good” moments. Just a teensy bit of that might have helped here to separate some of the other athletes out and make them stand out as individuals. Instead, when we finally reach the Olympic Trials (supposedly for the 1980 games that the athletes already knew the US was boycotting), the full impact of that – awful for those competing – decision isn’t as walloping emotionally to us as it should have been. It isn’t until real sports commentators Frank Shorter and Charlie Jones mention it in a throwaway line that it even comes up in the story.

I’d love to see this movie, or a newer version of it, redone with better actresses, tighter editing and a pinch more emotion. In its day, it was daring but without a little more heart I ended up disconnected at the end and slightly bored by some of the lingering on the minutia of the training regimens. Still, the haircuts, music and fashion styles are a fun trip back in time.