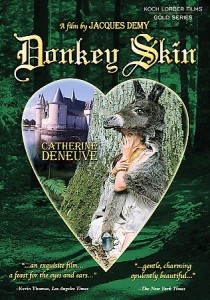 Last year after I had reviewed a series of Cinderella movies, a friend recommended that I try this French fairy tale called Donkey Skin – or Peau D’ane. I was game and rented it from Netflix. Talk about beautiful European WTFery. Holy heck. This one is oozing with it. But it’s also a charming tale which originally served a purpose as do most fairy tales. In this case, it’s don’t marry your daddy. Catherine Deneuve stars as a Princess whose father (Jean Marais) seeks her hand in marriage after promising his dying wife (also played by Deneuve but with red hair) only to wed a woman more beautiful than she. Listening to her godmother, the Fairy of Lilacs (Delphine Seyrig) the frightened Princess first makes a series of impossible demands as a condition to her consent: a dress the color of good weather (look carefully for the fluffy white clouds that pass over it), then another the color of the moon, a third as bright as the sun and finally, after all those were met, the skin of her father’s prize donkey which excretes gems. When all these are met, her godmother advises her to flee while wearing the skin of the donkey as a disguise. At a farm in a neighboring country, she finds work as a scullery maid. A Prince (Jacques Perrin) passes by and spies her at home wearing one of her beautiful dresses and an unlikely romance is born. But can the Prince get his parents the Red King and Queen to agree to his marriage to a woman wearing such a smelly and disgusting hide? Okay so the moral of the story is going to set off alarm bells – don’t marry your parents. But then…that’s the whole friggen point of fairy tales, to serve as a warning to growing children about what is and is most definitely not acceptable to do. Children probably won’t be as freaked out about it as their parents are and in fact, in the extras of the Koch Lorber DVD is a featurette about how French children view the fairy tale and this film. One thing I do really like about this film is that the Princess is proactive. She doesn’t just sit around the castle fending off Papa. Instead she seeks help, acts on the Fairy’s advice and is ready to make a play for her Prince when the moment is right. The costumes! Totally fairy tale book vivid color, pseudo Renaissance except for the Lilac Fairy who sports peekaboo negligee style duds. The music by Michele Legrand is catchy to listen. Even if you don’t understand French it’s obvious that it rhymes nicely and I found myself tapping my toes and head bobbing along with it. Whoever did the subtitles even got them to rhyme too. Listen for a jaunty little number of the servants and working folk conjecturing about who this mysterious woman in a donkey skin is and a happy little tune the Princess sings as she bakes a gateau while she’s wearing her sun bright dress. Now if I tried that, I’d get flour and eggs all over it. The scenery and sets are fabulous – the King’s large white cat throne, Princess’s garden bedroom, the stereotypical wretched woodcutter-style hut in the woods that Peau d’an lives in: It’s all straight out of a fairy tale book. But real castles and chateaux, the Chateau de Chambord and the Chateau du Plessis-Bouree, are also used. Some of the make-up takes a little time to get used to – in the Princess’s kingdom it’s kind of like oompa-loompas plus their regular sized cousins and then there are the red horses in the Prince’s country….Oh, and the talking, seeing rose. If I read that in the story, it wouldn’t phase me but actually seeing a rose with a pair of lips is surreal. After that, seeing a blue and gold macaw in Renaissance Europe is nothing. The old woman who spits toads is cool. I feel sorry for the poor donkey though. What did he ever do but shit gold and gems and he gets axed. Don’t freak at the anachronistic arrival of the Lilac Fairy at the ending. It actually makes sense if you listen closely to the early descriptions of her talents.

Beautiful Catherine Deneuve and handsome (though very young looking) Jacques Perrin plus Jean Marias are a good start if you’re looking for reasons to watch this movie. Everything else is a great bonus though. It’s almost like a hallucinogenic trip but without the need for messy drugs. Come for the WTF but stay for the opulent beauty.