Nate and Hayes (aka Savage Islands) (1983)
Genre: Adventure/Swashbuckler
Grade: B- 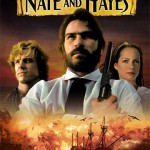 Did I understand correctly that we like our swashbucklers here? I think I did and here’s another entry into the genre. I first saw it when it was broadcast on the Cinemax cable TV channel, oh quite a while ago, but honestly have no memory of it during its theatrical release in 1983. And while it’s certainly got some flaws, it’s worth seeking out for a few reasons.

Captain Bully Hayes (Tommy Lee Jones) is a sea captain in the South Pacific – with an endless supply of brightly colored sashes – who is currently transporting a young couple from Boston to the South Seas islands for their wedding before they begin a life of missionary work. Sophie (Jenny Seagrove) and Nathaniel (Michael O’Keefe) have differing opinions on Hayes – she likes him whereas he thinks Hayes is a rogue but neither expect to see him after they reach the island where Nate’s Uncle and Aunt minister to the natives.

Hayes has obviously fallen for Sophie but initially leaves the island only to suddenly change his mind and turn about. Good thing since a nasty type named Ben Pease (Max Phipps) and his crew have attacked the island, taken most of the natives for slaves and killed most everyone else. Everyone except Sophie who Pease plans on selling and Nate who Pease thought was dead.

Now with the help of Bully and his crew, Nate must find and rescue Sophie before Pease and his new partner Count von Rittenberg (Grant Tilly), who is looking for expansion room for Germany in the area, can offer her up as a human sacrifice in a deal for anchorage on an island ruled by a cutthroat native King. 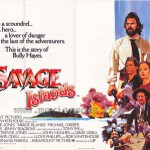 Initially I did hesitate to review this movie here because it does have flaws but it’s also a swashbuckler with a grand sweep and several characteristics that make it stand out. It’s set in the South Pacific rather than the usual Caribbean location and what gorgeous scenery it does have. The movie was filmed entirely in New Zealand and Fiji and is a visual treat.

It also includes a steamship and deals a bit with the expansionist political policies of the great nations of the age. Hayes and his crew are unabashedly earthy anti-heroes who enjoy a visit to a Somoan brothel at one point. I also like that Sophie is proactive in her attempts to escape instead of just waiting like a helpless damsel. And I want her wedding dress!

Most swashbucklers featuring pirates usually end with the pirate reformed or the conditions that lead him to piracy resolved thus allowing for his return to a life of law and order. But here, not only is Hayes still up to his old tricks, as shown by the initial scene of him gun running to the natives, but he also appears to have gone a long way in corrupting Sophie and Nate, as we see by the final scenes. It’s a fun change of pace from the usual.

But I did mention flaws and here are some of them. This film has never heard of the term PC. The villains are villainous and don’t look for them to be anything else be they white or native. Only Nate ever attempts to save the enslaved peaceful islanders from being sold and this is limited to an effectual try. The initial gun running scene ends with most of Hayes’s crew being captured and, again, no attempt that is shown is made to rescue them.

There is also a mix of comedy to go along with the swashbuckly parts which sometimes works and sometimes falls flat. The level of violence is high for a PG rated film and includes stabbing, shooting, impaling, strangling and crushing. Finally, although there are sword fights, somehow they just don’t seem to have the same elan when carried out on a steamship. 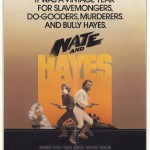 Tommy Lee Jones is great as Hayes – always ready with a quip and a quick fist when needed. O’Keefe finally loosens up and has some fun with his part while Jenny Seagrove is given a much stronger role than the usual female love interest got in the golden days of Hollywood pirate movies. The music is grand and sweeping even if it’s used a tad too much and the locations could be part of a tourist campaign.

So if you’re looking for a different swashbuckler check this one out either at Netflix, through used DVDs (if it’s being sold for less than $20, it’s a deal) or VHS tapes or through my friend youtube (entire movie up in 7 parts). It’s far from perfect yet it’s one of those films which I like in spite of much of itself. B-