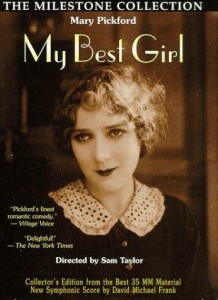 This movie is so cute I just want to scoop it up and hug it. Mary Pickford’s last silent film, it showcases her charm and talent and proves why she was America’s sweetheart.

The plot is nothing new or exciting. Maggie Johnson (Pickford) is a stock clerk at a five and dime store where she meets new fellow clerk Joe Grant (Charles Rogers) and takes him under her wing. Only he’s actually the owner’s son, there to prove himself before his engagement to a society girl hand picked by his parents. But he and Maggie, of course, fall for each other. What will happen when the rich Merrill family finds out about poor Maggie? 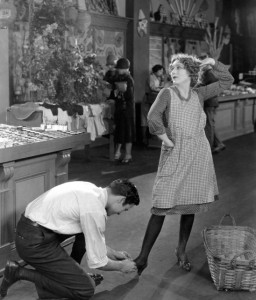 Maggie is so the romance heroine martyr. Her mother spends her days attending funerals – doesn’t matter whose – while her henpecked father waits around at home. Meanwhile wild sister Liz is going out with “sporty” men and getting into all kinds of trouble. Maggie seems to be the only one who works – all day – then she comes home to make dinner and clean up the family messes.

The other girls at the store might joke with Maggie about her interest in Joe but he’s just as interested back as we see in two charming scenes when he rides home with her in the back of a truck before meeting her family in an especially raucous mood. Then later they eat lunch in a packing crate, laughing together and annoying an older supervisor before even he is won over by their obvious love for each other. But Pickford never lets us feel sorry for Maggie. She loves her family and only stays out one night when Joe talks her into going with him for dinner – to his family’s house when they’re out. She’s horrified at the thought while Joe mimes and winks his plans to the butler behind her back. What follows is a funny scene of Maggie flustering the footman and quietly telling Joe that the service is excellent even if the food is poor.

Then the Merrill’s arrive home and before she flees into the rainy night Maggie finds out just how much Joe has lied to her. As she wanders the streets and dreams of what might have been, Joe frantically searches for her. Only to find her talking the night court Judge out of jailing her sister who’s been arrested. Joe declares his love but Daddy Merrill has to make a final play at getting rid of Maggie before true love prevails.

This is the only scene which I thought Pickford played too broadly but the following reconciliation with Joe was worth it. For the rest of the movie, the actors mainly underplay it and there’s a lack of the overwrought facial expressions and exaggerated acting which I associate with silent films. Here the physical comedy is fantastic and usually had me in stitches. There’s not a lot of dialogue but the actors are so good that it’s not needed to follow what’s going on and being said. I also like that there are a few sound effects and the background music is played by a full orchestra instead of only a piano. It’s also clear that the film was made before the Hays Code as seen in a funny early scene when an overloaded Maggie is attempting to bring out more stock in the store and accidentally drops a pair of ladies underwear. An unknowing female customer walks onto them then looks down and is horrified at the thought that she’s dropped her drawers in public. During the final reconciliation scene, Maggie initially turns him down saying, “It’s my family, Joe…they need me more than you do.” Her father overhears at which point he finally grows a pair, stands up and yells, “Like hell we do!” before he takes charge and kicks his lazy family in the collective ass. Color me shocked when he said that! But it’s funny as …well, hell. The movie is only 87 minutes long but it’s one I didn’t want to end. It’s filled with humor, creativeness and wit. Pickford and Rogers, who would later marry, have wonderful screen chemistry and are backed by a great cast. If you’ve never tried a Pickford movie or a silent one, here’s a great place to start.