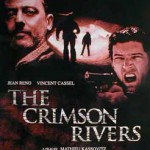 Remember in my review of “Brotherhood of the Wolf” when I said that by the end of the film, the plot has gone to hell in a hand basket? Well, here we go again. But this time, at least most of the actors involved in the film say the same thing and that they didn’t totally understand it either. I’m not alone!

“A pair of French investigators working on seemingly unconnected cases — a grisly ritual killing in an insular university town and a graveyard desecration that occurred 150 miles away — join forces when their clues ultimately dovetail. Jean Reno and Vincent Cassel play the mismatched sleuths whose paths converge, and the icy French Alps serve as the eerie backdrop for this atmospheric thriller from director Mathieu Kassovitz.”

“Crimson Rivers” is beautifully shot even though when you listen to the commentary Kassovitz describes what a PITA is was to get the continuity right and that even with careful editing there are still massive errors which he has fun pointing out. It’s very atmospheric with an edgy music score and stark backdrops of this alpine region of France which has places that sometimes don’t get any sunshine all winter. Or so they say. I just had to get a picture of the stone bridge in the screen show and when you see it, you’ll get an idea of what I’m talking about. There’s also a scene at about the 1h 11m mark of Vincent Cassel chasing the killer at night through the fog which stayed with me for days after I first saw the movie. I still like to rewind my DVD just to watch it again.

Though the murders are grisly, none of them take place onscreen. And there’s enough advanced warning of Corpses Coming!! that you can avert your eyes. In fact, the most violent thing about the movie for me was the kickboxing scene when Cassel’s character takes on some skinheads. Watch for when his nose actually gets broken during the shot.

There isn’t a whole lot of backstory on either of the cops but Reno and Cassel are fabulous at showing all we need to know. Reno’s character Niemans is the old, cynical cop who’s seen far too much while Cassel is Max Kerkerian, the young tough who could have ended up on the other side of the law. Look for the number of times they, ah, “appropriate” the cars of other police officers or are trying to break into places. Once Kerkerian says he’s opening a door “Ã  la Niemans” as he breaks in the glass. Independently, they might never have cracked the case but together, they are two halves of the whole.

One interesting thing I found out while watching the fabulous documentary (note: watch it after you see the film) is that the filming of first scene of the movie got screwed up because of an overnight snow and thus a bunch of exposition was lost which Kassovitz had to reintroduce while almost totally rewriting the script. Actually, I think this helps things in that the viewer doesn’t know much more than the characters do as the story progresses making us have to pay attention.

Back to the commentary I mentioned earlier. Reno, Cassel and Kassovitz are obviously having fun doing it but at the same time it’s informative. It’s great. It’s also funny because Kassovitz says that almost all of the secondary actors would ask him the same question as the primary ones: “What’s going on? What’s it about? What am I supposed to know?” “Nothing,” he would say. And that’s the point. They also had to watch it to find out the end.

And that is the film’s weakness: the ending. It doesn’t make a whole lot of sense and hangs on one of the worst plot devices. It’s an action sequence during which all the answers are finally tied together and as Cassel says, “if you try to understand it at that point, you’re screwed. But luckily there’s only about 2 minutes left in the film.” And then the avalanche starts which, pardon me, sweeps the film to the end.

The film has its weak points [see above] but overall is worth a watch. It’s beautiful to see and has a great cast including Cassel’s father, Jean-Pierre, Dominique Sanda, Nadia FarÃ¨s, Didier Flamand, Karim Belkhadra and, in bit parts where you can’t tell it’s him,Mathieu Kassovitz. Just let it carry you along to the end then try and figure it out.