Kondukondain Kondukondain (I Have Found It) (2000)
Genre: Kollywood Family Dramedy
Grade: B+ 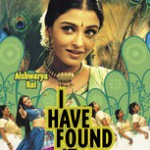 Ever since I fell in love with “Monsoon Wedding” I’ve been looking for more movies from the Indian subcontinent. Kandukondain Kandukondain (I Have Found It) is highly ranked at Netflix so I added it to my queue. And waited. And waited. Until it was marked with the dreaded “Unavailable.” But I left it in my queue and finally it was available but with the also dreaded “very long wait.” Then I saw it was on sale at a place where I like to buy my DVDs so I took a chance and ordered it. My long wait paid off in spades.

“Rich, young, gorgeous and pampered, sisters Sowyma (Tabu) and Meenakshi (Aishwarya Rai) want for nothing except the true love their hearts crave. While Sowmya grudgingly places family responsibilities head of romance, Meenakshi yearns for a white knight who will come to her “just like a storm.” Three different coincidences bring the girls three very different suitors and a tempest of romantic complications. Manohar (Ajith), an aspiring filmmaker, falls for Sowmya but will wed her only after directing his first film. Commando Major Bala (Mammooty) woos Meenakshi despite physical and emotional war wounds and competition from Srikanth (Abbas), a charismatic poetry-quoting businessman. But with their patriarch’s health ebbing, the romantic storm Meenakshi and Sowmya wished for may soon be eclipsed by the harsh realities of modern South Asian life.”

Kandukondain Kandukondain is actually not a Bollywood film since it’s in the Tamil language. I believe it’s called Kollywood but whatever the official designation it’s great. Vibrant is a word I could use to describe all the movies I’ve watched in these genres. The colors dance in front of my eyes, dazzling me. The better movies have songs which make my feet tap as I sway to the rhythms. Needless to say I was bebopping all the way through this one. For those who haven’t seen a B/Kollywood movie, expect a full fledged song and dance number at various times throughout the film. They seem to add about half an hour to any movie. However, if you don’t care for them, just fast forward though them.

No doubt the Austenistas are getting impatient for me to comment on how well the film resembles the book. Since it’s been years since I read the book, I honestly can’t answer that. How good an adaptation of Emma Thompson’s screenplay is it? Very good, is my answer – with some twists that make it uniquely Indian. There are a few changes to the storyline as the family isn’t tossed out of their palatial home until the grandfather dies at about the 1 hour mark. It’s then that they move to Chennai (Madras) rather than endure the bitchy wife who Sowmya and Meenakshi’s uncle married. Sowmya and later Meenakshi then go out and get jobs to help support the family as does their mother.

Manohar comes from a wealthy family but he doesn’t want to use his engineering degree or work for his father’s company. Instead it’s being an assistant director in the film industry which has alienated him from his family. But perhaps the oddest difference is the way the film opens, with some background scenes of Major Bala’s former military life. At first, I wondered WTF? Is this some kind of preview for another film? But it’s more insight into what made his character begin drinking and become so bitter and moody before meeting the young woman who captures his heart. Srikanth hasn’t ruined any young women. Rather it’s his shady private bank which defaults on its investors that brings him to ruin and causes him to have to marry another woman.

But the rest of the story follows the outline Thompson wrote. Sowmya and Manohar are already in love but separated by circumstances. There’s even “the other woman” who temporarily steps between them. Meenakshi loves her poetry and initially spurns the man who is more practical – bringing pillows upon which to rest her injured ankle – for the one who can quote poetry to her. Their younger sister has a passion for science and their mother is a loving airhead. Meenakshi finds out Srikanth’s betrayal of their love and almost dies as a result of her heartbreak yet this event makes her finally see the man who does truly love her.

And when Meenakshi confesses her love to Bala, I teared up. Have you ever finally gotten something you’ve wanted for so long? Something you never thought you’d get, that you had given up hope to ever get? And when you get it, you’re almost afraid to touch it? That is this scene and Mammooty plays it beautifully. I will confess that the HEA scene between Sowmya and Manohar doesn’t work as well with a martyrish Sowmya initially turning him away before changing her mind to “yes” almost in the blink of an eye. It’s the one time the movie falters for me though, so I can live with it.

Right now, short of buying it, I think the only way to see this film is on youtube. Just type in KandukondEin (note it’s been uploaded spelled with a final E not A) and the first part should come up. It is long (2.5 hours) and the subtitles flash by so be prepared to read quickly. But if you open yourself to trying something different – and yet the same – you just might fall for it as I have. B+