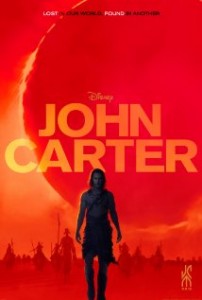 The story opens in 1881 with John Carter (Taylor Kitsch) ducking and dodging someone through the rainy streets of NYC. Reaching a telegram office, Carter sends an urgent request to his nephew to come to his estate. When Edgar Rice Burroughs (Daryl Sabara) arrives a few days later, he’s met with the news that his uncle died suddenly the night after sending the telegram. In his will, Carter has left care of the estate to his nephew for a period of years after which it will fully transfer to Edgar – or Ned as Carter always called him. The lawyer (Nicholas Woodeson – if he looks familiar, he was in “Rome”) instructs Edgar on one final request of his uncle’s – that Ned read the journal his uncle kept for years. Ned begins to read and is taken back to the Civil War – or is it just after? I can’t recall – anyway, Carter is out west searching for gold and thinks he’s almost tracked down some mysterious cave which a Yavapai Indian told him about. When he arrives at a trader’s store, US Army cavalry men kidnap him and take him to their Colonel (Bryan Cranston) who attempts to persuade Carter to sign up. Carter responds by almost escaping twice before finally doing so – by stealing the Colonel’s horse. Hot on his trail, they track Carter down right before being confronted by a band of Apaches. Carter and the Colonel head for some caves and it’s then that Carter realizes 1) this is the cave of gold and 2) there’s a strange man in it who attacks him. Carter shoots the man and picks up a fantastic medallion the man was holding just as the man utters a foreign phrase. The next thing Carter knows, he’s somewhere else and suddenly can leap high in the air as if he has little gravitational pull. Meanwhile, a 1000 year old battle is raging between two different groups of people and we learn that Zodanga is attempting to subdue the other, taking over their city of Helium. (Someone tell me I’m not the only one who was waiting for these people to speak like chipmunks) When the Zodangan leader (Dominic West) is given a kickass weapon by some bald guy named Shang (Mark Strong), the Zodangans gain the upper hand. The Helium leader (Ciaran Hinds) tells his beautiful, intelligent daughter Princess Dejah Thoris (Lynn Collins) that in order to save her people, she marry the leader of the rampaging bastards. Dejah is understandably pissed off but with no other choice, she – supposedly – gives in.

Meanwhile, Carter is still bounding all over the place until he discovers some kind of hatchery and sees eggs busting open to reveal multi-armed little blue/green offspring. He pulls back in astonishment and says something like, “Where the hell am I?!” He’s not the only one wondering. Shortly afterwards, a group of cavalry ride up and Carter is shocked (again) to realize that these are beings he’s never seen before – each with four arms, side face tusks and colored a lima bean green. They’re amazed at his jumping ability but manage to take him prisoner and head back to the home place. Chained up there, he’s fed something by Sola, a young female Thark, that acts as a language converter allowing them all to understand each other. Good thing as the English translation of their language was so small on screen that I was getting a headache reading it. Carter escapes – it’s his specialty – but picks up a devoted dog like creature called Woola. I adored Woola. Woola can zip around faster than greased lightning and busts into a gathering of Tharks who start to beat him off – which seriously pissed me off! – causing Carter to rush to his rescue. Shortly after that, two amazing flying machines engaged in battle zoom over Thark City – as I called it. Carter notices someone hanging below one of them and jumps up to catch him/her before he/she falls. When they reach the ground, he discovers she’s a beautiful young woman (one guess as to who she is). Her arrival signals a Thark political/religious power play – or something – and Carter, Dejah and Sola all flee into the wilderness searching for a sacred river in the hope of learning how Carter can return to Earth. They find it – but only after Carter and Sola learn just who Dejah truly is. Carter and Dejah (I kept wanting to call her Deja vue) venture somewhere and kinda discover something of a religious nature that also confirms Dejah’s discovery of some powerful ray thingie. Then they leave because of some disturbance and all of them get attacked by some other group of not-quite-Tharks called Wharhoons (I think). Carter does the hero thing and sends Sola and Dejah to safety before channelling his inner rage at the death of his wife during the Civil War. The inner rage lets him open a can of whoopass on the Wharhoons. Carter gets captured – again (but only so he an escape – again) and learns that Dejah has agreed to marry the Zodangan dude. Shang monologues to Carter about who and what he is, oh and Dejah must die, before Carter escapes and heads back to the Tharks for help. He reaches the Tharks only to find the leader has been overthrown and both of them plus Sola must fight in the arena against some huge, ugly creatures. Of course Carter wins and the whole group then heads off to save Dejah.

Major fight, Dejah’s saved and the evil Zodangans get theirs, then it’s wedding time for Carter and Dejah before – oopsie – he does something stupid and gets sent back to Earth by Shang – why? dunno. Anywho, now Carter has to try and find a way back to Barsoom (Mars). But he’s smart and eventually manages. Happy days are here again and The End. As I said, I knew next to nothing about these books or what to expect from the movie. Several times within the first 30 minutes of movie after Carter got to Mars I (literally) said out loud, “What the hell is going on here??” Also “Who are these people??” As well as “Wait a minute! Now who are those people?” Followed by “How does this all tie in together??” I was one confused camper and none too happy about it. Not dragging a film to a halt with back story and monologuing is one thing but feeling totally “arse over teakettle” trying to play plot catch up is not a good thing for me. From what I read in reviews afterwards, I wasn’t alone and even those in-the-know about the plots of the books were grumpy because the film makers had smushed parts of several of the books into one screenplay. Taylor Kitsch cleans up nicely and is pretty to look at but he just never got Carter off the ground for me – sorry, pun intended. Lynn Collins is also pretty to look at and thankfully gets to kick a little ass as the Princess rather than always being saved. A lot of rest of the cast is almost like a “Rome” reunion with a little “Centurion” thrown in. I kept expecting Hinds and James Purefoy (he’s some Helium dude) to refer to each other as Caesar and Mark Antony. Poor Dominic West doesn’t get to do much except pout that he can’t unleash his kickass weapon more. Mark Strong plays his usual villain self while I had no idea who were the actors behind the Tharks until checking IMDB. I have to confess to hitting the FF button a lot during the first pass. Then I discovered that there’s a fairly decent commentary track to go along with the film and I started it over with that playing to see if it would help me make sense of everything. The commentary is a lot more fun to listen to than the movie is to watch. It’s obvious that the director – “I want chickens!” – and his minions were devoted to capturing their joy from the books on screen. I just wish the whole thing had seemed less like a mess and a head scratcher. A $250 mill budget is a fun thing to play around with and the film is spectacular to look at but that still doesn’t make it something understandable or that I’d watch it again.

So, please tell me what your thoughts are on the film. Did you see it like I did – with no background to help you make sense of it? Or were you panting at the door of the movie theater on opening night because you’d waited all your life for this series to be made into a movie? Were the CGI effects enough or too much? And did you wonder how these classically trained British actors managed to keep straight faces while saying “Zodanga?” C- and that’s mainly for Woola.