Iron Monkey was originally made in 1977 and remade in 1993. I’m concentrating on the remake. There are two editions of this movie to be found (though with varying extras and treatments) and a quick scan of movie sites will reveal passionate feelings about them both. As a newcomer to HK martial arts films, I’m not going to get down in the trenches and Jello wrestle about which is better. I’ve seen both the original HK version and the Miramax version that Quentin Tarantino touts. From what I understand, the version widely shown in the US tones down the political stuff and doesn’t emphasize the role of historical figure Wong Fei Hung as much. What I can say is that I enjoy watching both versions and, unless you’re a purist – and there’s nothing wrong with that – I think you could enjoy either one. 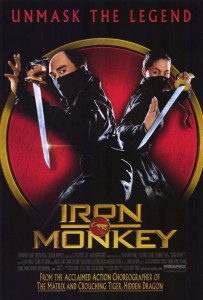 The people of a small Chinese town suffer from failed crops and corrupt Governor Cheng (James Wong). Iron Monkey, a Robin Hood-esque figure based on a benevolent diety, robs from the Governor and rich and gives to the poor. When martial arts master/doctor Wong Kei-ying (Donnie Yen) and his son Fei Hung (Sze-Man Tsang) arrive in town, a gang of pickpockets tries to rob them. While defending himself, his martial arts skills attract the notice of the security detachment sent into the city to arrest anyone who could even remotely be the Iron Monkey. Wong and his son are taken in and, along with the others arrested, are harangued by the Governor to identify Iron Monkey. Just as he’d hoped, the Governor’s actions draw Iron Monkey out and Wong attempts to subdue him in order that all the detainees might go free. But neither one wins the fight and the Governor gives Wong seven days to find Iron Monkey or else. He also decides to keep young Wong in custody so his father won’t flee. The townspeople distrust Wong and refuse him any food or aid but beautiful Miss Orchid (Jean Wang) invites him into the medical clinic run by Dr. Yang (Rongguang Yu) who treats the poor for free while gouging the rich. There Wong reveals his mission and his worries for his young son. Yang and Orchid promise to look after the boy and eventually get him out of prison. If you like the wire work in “Crouch Tiger, Hidden Dragon” then you’ll probably enjoy this film. Directed by Yuen Woo-ping, the action starts early, is fast and furious and keeps going until the end. Yuen also choreographed the Matrix and Kill Bill movies if you wanna know. The man is astounding. Wong fights, Yang fights, Orchid fights, Fei Hung fights, the evil monks and the Legate fight – everybody except the Governor fights. They fight on rooftops, they fight in the clinic, they fight in the Governor’s residence, they fight on the streets and in the famous last sequence they fight balanced on poles above a blazing fire. It’s so fricken’ awesome.

I’ll mention a few differences between the HK version and the US one. Yuen employed undercranking which when played at regular speed makes the action appear faster than it is. This was slowed down in the US version. There’s more bloody violence and a scene between Miss Orchid and evil monk minions is more overtly sexually threatening in the HK one. I also don’t recall if the subtitles of Miramax include as much naming of techniques as they’re being performed which I’ve read that Wong Fei Hung usually did in real life. Once I knew about it, I thought the fact that this is included is neat. There is a short substory about Miss Orchid’s background that I don’t recall in the Miramax edition either though some people say it’s there. Watch for it as it adds poignancy to her efforts to protect young Wong and her relationship with Dr. Yang. Personally, I sense a budding romance between those two but nothing is every overtly shown – or if it is, I missed the clues. The HK version also has more comic moments which come as a nice interval between the martial arts sequences.

Yen, Yu, and Tsang are all martial artists. I can’t find information about Jean Wang so if you are aware she is, help a sister out and let me know. Tsang who plays young Wong is actually female and she rocks in her role. The real Wong Fei Hung, in addition to naming techniques as he did them, was also famous for his staff work which is prominently used in movie. Both Wongs also use the Shadowless Kick while fighting in the film. The main baddie Legate gets a truly cool thing though – the fighting sleeve! as well as the Wonder Palm of Shaolin. Listen out for all the trash talking too. You’re just not being a badass fighter if you don’t trash talk. If you haven’t watched many martial arts films, and I count myself in this group, here’s one that is accessible both from a point of understanding and availability. Start with whichever edition you can get your hands on and see if you want to progress to trying the other. If you want to stay strictly shallow – and God knows I certainly am, the two main heroes are certainly easy on the eyes (Yu started as a male model in China) while Jean Wang is beautiful and Tsang is as cute as a button. I would also suggest watching with both subtitles and the English language track to get different nuances of what’s going on. I’m also looking to expand my experience of martial arts movies so if you have any suggestions, let me know. B+

→ Jayne
Previous article: REVIEW: One Good Reason by Sarah Mayberry
Next Post: REVIEW: A Game of Lies by Rebecca Cantrell