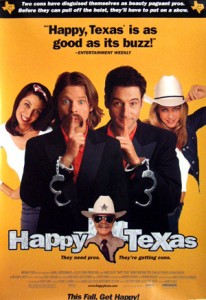 The bonus features on the DVD show that this film played well at the Sundance Festival but honestly, I don’t remember hearing about it when it was released. Nor much about it since then – which is a shame since it’s a lighthearted, feel good comedy/romance with some outstanding actors.

It all started with the armadillos. Harry Sawyer (Jeremy Northam) and Wayne Wayne Wayne, Jr (Steve Zahn) are two bit crooks out on a work detail cleaning up road kill in Texas. Chained together with another convict, killer Bob Maslow (M.C. Gainey), the three get into a fight and are being transported back to the prison when the driver swerves to avoid another armadillo and wrecks the van. The three escape with Bob headed one way while Harry and Steve take off in another.

They steal a beat up RV and, after it dies on the road, are discovered by Chappy Dent (William H. Macy) the sheriff of Happy, Texas. Dent hauls them into town where the confused cons are bargained down – but bargained for what? Slowly, as they explore the RV, they discover who and what the townspeople think they are – a gay couple who travel to beauty pageants helping the locals stage and produce them.

At first Harry and Wayne – now known to the town as Steve and David – plan to take the money and run but soon discover richer pickings. If they stay in town and use the pageant as a cover, there’s a chance to rob the bank for even more money. And after all, how hard can putting on a pageant for little girls be? But as the boys are accepted by the townspeople, they begin to not only own the beauty pageant but find love as well. Problem is the other escaped convict is still on the loose. When the chips are down, which side will they help and what does the future hold?

For anyone who’s only seen Jeremy Northam in his period costume movies, his performance here is eye opening. Not only can he do a convincing American accent but he manages to romance not only the female bank manager, Joe (Ally Walker) but also Sheriff Dent who charmingly comes out during the course of the movie. Watch for the gay bar/restaurant they go to and how well they end up dancing together. And even though Harry has to break the truth to Chappy in the end, Chappy still manages to get himself a guy in the form of a Texas Ranger and save the day as the robbery is going down.

Steve Zahn is hilarious as the half of the duo who gets stuck with the pageant girls and who has to learn the best way to sew sparkly hearts on to their costumes. His dance sequences – choreographed himself – look like a spastic frog on speed but by the end, his heart is in the right place and his main concern is that his girls hold the beat during their dance numbers.

And that, really, is the charm of the movie. Harry and Wayne begin as cons out for themselves and find something worth more in Happy. People who like them and look up to them and trust them to be better than they’ve ever been. As Harry tells Joe in the end, he’s never cared that he’s been a crook and he’s always been slightly fuzzy about being on the right side of the law – but there’s nothing fuzzy about the way he feels for her. And with good behavior, he can be out to prove it in 22 months. Wayne also finds love and maybe a calling putting on pageants. The funniest lesson learned is by Bob Maslow who learns that you don’t screw with a Texas female who’s competing in a beauty pageant.

It’s not the funniest movie I’ve ever seen but it does make me laugh – watch for the scene when Harry and Wayne at first think they’re circus midget tailors or listen for Wayne’s threats to misbehaving boys and his prayer before the pageant. William H. Macy’s performance is fantastic and his character’s coming out is treated with tenderness and delicacy. Another thing I enjoy is that the townspeople, for the most part, aren’t treated as Southern caricatures either. And don’t worry, no armadillos or bunnies were injured making the film. B-

→ Jayne
Previous article: REVIEW: The Lantern by Deborah Lawrenson
Next Post: REVIEW: In Bed with the Boss by Susan Napier