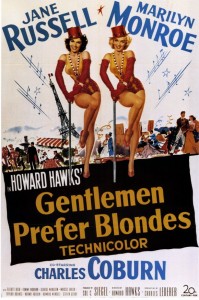 Yes, this one is dated and seems terribly sexist but how can you go wrong with two BFFs who do some fab Parisian shopping then find love. And while at first it looks like nothing else except tight tops and tighter skirts, if you listen to the lines, these two girls from Little Rock are actually quite smart.

Lorelei Lee (Marilyn Monroe) and Dorothy Shaw (Jane Russell) are two stage performers and best friends. Lee has snagged a rich fiance, Gus Esmond (Tommy Noonan), but his father disapproves. They had planned to sail to Europe on the Ile de France and get married there but with daddy mad at Gus, the plans change. The two women are to sail with Dorothy acting as Lorelei’s chaperone. But Mr. Esmond senior sets a private detective Ernie Malone (Elliott Reid) on Lorelie to see what she does on the journey.

Lorelie’s irrepressible love of diamonds gets her into trouble as does her incessant matchmaking for Dorothy (looking on the ship’s passenger list for men listed “with valet” doesn’t always work). When the two figure out that the man who’s been wining and dining Dorothy is actually the PI, they use their talents to get the incriminating pictures back. But the damage is done and the two find themselves stranded in Paris with no money. Not to worry – they’ll sing their way out of trouble in a nightclub, and a French court of law, while winning back the two men who love them.

Some of the older bombshell movies haven’t aged well but this one does. Monroe and Russell rarely looked better, especially in the 50s fashions made for fuller figured gals. It’s no wonder that men followed them like lemmings throughout the movie. And there are plenty of opportunities to watch Monroe’s famous “walk.” The whole movie is in vivid Technicolor and is a treat for the eye.

But the film also shows that both women were great comedians though with different styles. Dorothy has a dry wit while Marilyn comes off as ditzy scatterbrain – that is until one listens to her arguments to her future father-in-law for why she wants to marry Gus.

These two may play on their looks but they’re just doing what they know the men expect them to do and wrapping those men around their fingers at the same time. And it works for me because these two are never hard edged as they go after what they want. I genuinely believe that Lorelie loves Gus while Malone manages to make it up to Dorothy for what he was hired to do. In this movie the women are strong while their men are actualy fairly weak.

The film is a musical with several wonderful songs including the opener “Two Girls from Little Rock,” “Bye, Bye Baby,” and the iconic “Diamonds are a Girl’s Best Friend.” I know I can’t think of Monroe without seeing her in that bright pink dress being carried around the stage as diamonds are dangled around her. The script also manages to be sexy while still following the Hollywood Code of the day.

Watch the film for the songs, the clothes, the male beefcake in the guise of the Olympic Team and the intelligent women portrayed by two actresses with remarkable onstage chemistry. It’s fun, it’s glamorous and it always makes me smile.