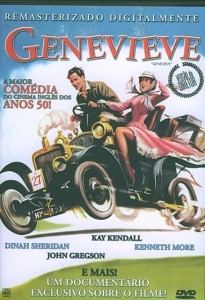 Originally I had another film lined up for today but yesterday I was reading that this coming weekend is the annual London to Brighton Rally. “That’s it,” I said. “Genevieve is on.” From a little film that the studio heads didn’t think much of and didn’t want to release, it’s become a classic. After a quick look around the web, I couldn’t find where anyone has loaded it to watch but there are DVDs from several regions available and it shouldn’t be hard to track one down should you care to check it out.

It’s 1953 and the annual veteran car run from London to Brighton, organized by the Royal Automobile Club, is under way. Two old chums, Alan McKim (John Gregson) and Ambrose Claverhouse (Kenneth More), aren’t letting their friendship stand in the way of trying to outdo and one up each other all the way there and back. Their long suffering WAGs Wendy (Dinah Sheridan) and Rosalind Peters (Kay Kendall) – plus Rosalind’s dog Susie – are along for the ride and often wondering just what’s gotten into the mens’ heads over these silly cars. Will the relationships survive the challenges and male nonsense? More importantly, will the cars make it there? And then back? On the surface it’s a car rally – though not actually a race, at least not until the run back – with lovely veteran automobiles to look at. Though I agree with the women in that it’s probably more fun to watch than to actually take part as – at least in the film – a tremendous amount of time seems to be spent on the side of the road while repairs are undertaken. The actual start of the race near Hyde Park was filmed for the movie and it’s obviously great fun for the participants and rally watchers alike. I might could manage wearing vintage, Edwardian clothes and cheering the start with a chilled glass of bubbly.

Scratch a bit deeper – well, alright not that much deeper – and the film is all about gender relations and the obsession of boys for their toys and of making bets regarding them. Several times while I was taking notes about “Genevieve” I’ve written things to the effect of “those poor women!” Wendy’s done the run with her husband a number of years after traveling down once with Ambrose -which serves to fuel the bet between the two men – and she’s had it. This news comes as a complete shock – a shock I say! – to Alan who obtusely imagines Wendy is delighted at the thought of spending another two cold days motoring down to Brighton and back. Meanwhile chic model Rosalind has no idea what she’s gotten herself into when she agrees to accompany new beau Ambrose. The women do come around and actually get into the spirit of the final push back to Westminster Bridge that will mark the finish line of the bet but their initial attitudes are just so typical of the women of the world who endure their menfolks’ foibles for love of them. All I can say is that Wendy must really love Alan to put up with what she does year after year and it’s obvious by film end why Ambrose – the arse – still hasn’t found a woman to marry him. Yet there’s a scene near the end of the movie where an elderly gentleman stops them to admire Genevieve and reminisce about how he proposed to his wife in a Darracq, that brings tears not only to my eyes but to Wendy’s as well. Alan’s reaction, all while falling farther behind in the race, finally shows us the real man and why Wendy loves him. The four stars are wonderful in their roles. Gregarious Moore plays the “bit of an oaf” Ambrose – who has no compunctions about yelling to women who are pushing his car into starting to “put your shoulder into it! – so well I want to smack him a few times. His laugh alone is enough to set off his friend’s competitive spirit. He makes Ambrose the vivid, cheeky charmer who’s always got a stunning new girl on his arm. Gregson plays the quieter, brooding Alan who hopefully will have a better appreciation for Wendy after this run. He makes his character come alive with joy at the prospect of first the run and then the race home. According to Dinah Sheridan, getting the shot of him looking sexily at her character near the beginning of the film was almost hopeless since he was such a reserved man.

But it’s the two actresses who shine here. Sheridan is just a darling and actually looks smashing in her plaid trousers. Gorgeous Kay Kendall lights up the screen and has fun hamming up a scene where her – at that point slightly inebriated – character displays her talent in “traying the plumpet.” Throughout the movie, I find my attention centers mainly on the women and their exasperation, humor, acceptance and, finally, enthusiasm. I enjoy the fact that – in 1953 – their characters were allowed to be less than happy little women who are 100% in support of whatever their men want. “Genevieve” along with another Kay Kendall piece called “Fast and Loose” (can be watched at Neflix) are great period films that show 1950s post war England. For its time, I’m not sure if the quirky, little flat the McKims live in is a bit of post-war “make do” or rather delightful. And that encounters with sheep who crowd the road in the country are probably few and far between today. The perfectly dreadful hotel room that the McKims are forced to take for the night in Brighton is awful – hot water only for 2 hours a day, peeling paint and a great, clanging tower clock just outside their window – and it reminds me a bit of the description given by Bill Bryson of a place he stayed at in 1970s (I think) Dover. I was also amused that the dig against Americans included in a script written by an American. Be sure to look for Joyce Grenfell in the bit part of the hotel proprietress. She’s hilariously funny.

The movie is also slightly risque for the age with its hints of Ambrose’s hanky panky weekends and the possibility that Wendy had a bit of sexual experience before her wedding. One exchange between Wendy and Rosalind says a lot. Rosalind says to Wendy, “Ambrose only seems to think about two things. That silly old car – and the other thing.” Wendy replies to Rosalind, “What other thing? Oh. My husband only thinks about the car.” The cars are fabulous and, should you wish to, you can see them on display at the Louwman Museum in The Hague. I think both still actually take part in the Rally. Genevieve is a Darracq while Ambrose’s car is a Spyker. Check out the horn on the Spyker. Isn’t it grand? For that alone I’d come close to riding in her. All the cars that take part in the rally must have been made no later than the year 1904 so these are some stylish, wonderful automobiles.

The film is more a gentle, whimsical, character comedy rather than a film with roll-on-the-floor moments. It’s sweet with nary a swear word in it but it’s also got some pointed things to say about women vs men and their cars. The women are no-nonsense while the men lose their common sense a little but all in all, it’s all in fun. It’s also got a webpage that I’m going to have fun poking around in. B