I was reluctant to watch this adaptation mainly due to the fact that I’m not a great Kate Beckinsale fan. Something about her struck me as distant, controlling and snobby. But my curiosity overcame me and I finally took the plunge and realized that she’s actually a very good choice to play this character. I had always then meant to review it but misplaced my notes until recently. Of course right after I queued it up to rent a second time, I found them. Now having seen it again, I find I enjoyed it even more than the first time.

Young, unmarried Emma Woodhouse (Kate Beckinsale) fancies herself a matchmaker after her former governess marries and becomes Mrs. Weston (Samantha Bond) though her father deplores anything that upsets his daily routine. Their neighbor Mr. George Knightley (Mark Strong) isn’t so sure of Emma’s talents and doesn’t hesitate to tell her so. But Emma is determined to match off another happy couple and decides on the vicar, Mr. Elton (Dominic Rowan) as her next subject. Totally misreading his interests, she tries to fix an attachment between Elton and her new friend Harriet Smith (Samantha Morton), after having romantically detached Harriet from a young farmer tenant of Mr. Knightley’s named Robert Martin. Mr. Elton scorns illegitimate Harriet and chooses a bride (Lucy Robinson) more snobbish than he.

Meanwhile Mr Weston’s (James Hazeldine) son from his first marriage Frank Churchill (Raymond Coulthard) finally visits his father and new stepmother just as the Jane Fairfax (Olivia Williams) the niece of the come-down-in-the-world Miss Bates (Prunella Scales) arrives in town. Much ado is made of who might be interested in whom with many feeling that an attachment is forming between Frank and Emma, though other characters sense something else in the wind. Will Emma be able to pull off another marriage match or will she finally realize too late where her heart lies?

Here Emma is not quite so silly and immature as in other adaptations. She is young, and frankly probably bored and merely looking for something to occupy her time, yet also comes across to me as truly having Harriet’s interests at heart despite obviously not wanting to lose her as a friend. She is also devoted to her father yet not so slavishly as in other productions. I can also see how much she cares for Mr. Knightley even before she’s realized it herself when his condemnation of her actions at Box Hill cut her so deeply. It does take Harriet’s infatuation to finally jolt Emma’s awareness of her true feelings but Beckinsale and Strong have simmering chemistry from the very start. Mark Strong’s Knightley is more bluntly outspoken here – ready, willing and able to express to Emma his distress at her actions – though his distress is also plainly due to his feelings for her and wishes for her to be a better person than she sometimes shows herself to be. He might be more brusque than the polished Frank Churchill but clearly is the better and more mature gentleman.

This Mr. Woodhouse is suitably fussy and obsessed with nitpicky details that affect him – just listen to him go on about soft boiled eggs – and it’s a clever move on Emma’s part to win him over to her marriage by promising that with Knightley living there, the chickens will be safer. Prunella Scales is fantastic as the annoyingly babbling Miss Bates. I find I like Samantha Morton’s portrayal of Harriet as young and impressionable rather than being a silly twit while handsome Coulthard is smooth as the charmer Churchill who always lands on his feet – much to the annoyance of Knightley. Still it’s always clear that he’s not the calibre of man he should be given his advantages in life. Rowan is nicely snooty as Elton while Lucy Robinson is his match in scorn for inferiors and obsequiousness to social superiors. Olivia Williams does the best she can with the role of Jane and I find myself, as does Knightley, feeling she deserves better than she’ll get with faux Frank. Andrew Davies did the screenplay and though the plot is truncated for time, it is far clearer and easier to follow than the movie from the same year. Diarmuid Lawrence – who directed some older favorites of mine including “By the Sword Divided,” a TV version of “Vanity Fair” and one episode of the period mystery series “Heat of the Sun” also does an excellent job. Since it’s a made for TV production, I would imagine that it didn’t have a huge budget but it never looked that way. The costumes are fairly standard Regency and the sets are elegant or, as in the case of the Bates, slightly shabby, enclosed and befitting their lowered financial status. I particularly like the lighting done with candles in several scenes. Yes, it’s dark but then this world, at night, was dark. Servants are also very visible here as their betters could never pick strawberries in rustic simplicity nor enjoy a picnic outing without them to provide the muscle and move the kneeling mats. One affectation I didn’t care for were the dream sequences used to convey Emma’s changing views. This version also seems a bit more serious than I recall the others being. 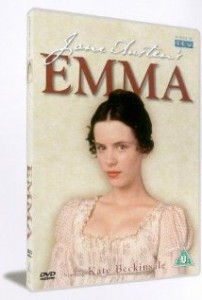 With such a good cast, and with the parts so well cast, along with a clear screenplay that makes it easy to follow the action, this is an easy hour and 45 minute viewing experience. I can feel how closed this small society must have been, how interested to the point of intrusiveness they would be in newcomers and how eagerly looking for novelty could lead to poking your nose into your neighbor’s business. This version seems to show the sharp social divides more than I remember the others doing as well as conveying the expected manners of the period. I find I like it better than the more recent 2009 one though I need to rewatch the 1996 movie before deciding how to compare it to that. B