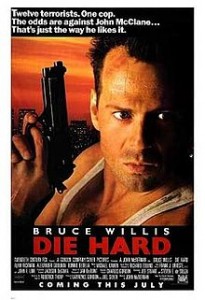 Three years ago I did a group review of some of my favorite Christmas movies. A number of you listed your own holiday standbys and for many of you “Die Hard” seems to top the list. When I was thinking about what movies to review this year, I wondered if I’d have enough to fill out the month of December. Turns out I’ve got too many and here’s the second one for this year – a day before December but what the heck. Yippee – kai – yay, motherf*ckers.

NYPD Officer John McClane (Bruce Willis) is traveling to LA in the hope of reconciling with his estranged wife Holly (Bonnie Bedelia). He arrives as her employer is throwing the company Christmas party in the as yet unfinished Nakatomi Plaza Building. As the party continues, John and Holly argue about the state of their marriage before Holly is called out of her office to give rousing speech to the troops. It’s then that a group of European terrorists headed by Hans Gruber (Alan Rickman) take over the almost empty building with surgical precision and ruthless efficiency. Their goal is the hundreds of millions of dollars in company bonds locked in an insanely hard to crack safe.

Mistakenly thinking they have either killed or captured everyone in the building, the terrorists are stunned to discover that there’s a lone wolf on the loose. Things turn personal when the first terrorist John tangles with and kills turns out to be the brother of Karl (Alexander Gudonev), one of the most coldblooded of the original twelve. Knowing he can’t take them out by himself, John desperately tries to get first the LAFD and then the LAPD involved in what’s going on. Though it takes a dramatic “welcome to the party, pal” event to get his attention, Sgt Al Powell (Reginald VelJohnson) is soon on John’s side and with him in fighting against the Idiots in Charge (aka the rest of the LAPD and later the FBI). As John’s cat-and-mouse-with-firearms game with Hans & Co continues, can he thwart the terrorists, elude the authorities and manage to save the lives of the 30 hostages?

It takes about 20 minutes to set up the story and kick things off but once the 23 minute mark is past, “Die Hard” is off to the races and unstoppable. When we see John carrying his sidearm on the plane trip to LA or listen to the chauffeur who picks him up at the airport going on about how the limo has VHS!, it’s also clear that this is a 24 year old movie. The shoulder pads Holly and the other women wear are a dead (oooh, forgive the pun) giveaway as well. I wonder how much an airline today would charge John in carry on fees for the giant stuffed bear? Still, it’s aged fairly well considering the number of sequels and “Die Hard on a _____” ripoffs that it spawned. I think the decision to make the whole thing about nothing but greed instead of politics is perfect as it allows the viewer to sit back and enjoy the show instead of being caught up in any issues or on any sides.

First trivia question – How much did a gallon of gasoline cost according to the prices listed at a gas station in one shot of the movie? John and Hans are two well matched adversaries who can both toss out witty one liners – thus establishing their coolness – under pressure. Willis creates in John McClane an American Everyman whom people can identify with. He’s actually the antagonist of the film in that he has to fight against the establishment as well as the terrorists. His battle with the morons of the LAPD and the cowboys of the FBI (“It’s just like Saigon!”) can be seen as our daily struggle against the clowns in charge of … whatever. We know we’re right. We can’t dump a terrorist body on the hood of a squad car to get our point across but we know those in command usually don’t have a clue. McClane is Roy Rogers, the Lone Ranger, and our last hope even though he can make mistakes and isn’t perfect. But he’s going to fight to the end and kick ass trying. Alan Rickman can play such a wonderful villain. From what I’ve read, his spoken German may be mangled but he’s menacing in a debonair, intellectual way all the same. McClane is the irreverent smart ass while Gruber is a smooth, civil, amoral bastard. You just can’t help but get a little frustrated along with him when his ever decreasing band of Euro trash henchmen – they’re Fabios with automatic weapons! – can’t seem to kill McClane. Yet, he’s got charm which keeps me from loathing him all through the film. He’s smart and interesting. Still when his time comes, it’s great. Even though he and his long haired bad boys might be there to steal over $600 million, the look on his face when he goes down —> priceless! Of course if he hadn’t stopped, in this case to laugh instead of the usual villain monologuing, it all might have ended differently.

Second trivia question – what is the name of the candy bar that one of the terrorists debates about before finally stealing and eating it? The people in charge of the movie do a great job balancing the action with the humor. The DVD I watched has two interesting commentary tracks – a vocal one and a text one that has a wide range of the people involved in the film both in front of and behind the camera. Director John McTiernan says that the movie has faced the type of scorn that we’re used to receiving as romance readers. Oh, it’s *that* type of movie. But he managed to convert some “I only watch depressing European indie films” friends, getting them to watch it and admit that it’s a well thought out thriller that doesn’t cheat as it delivers its yowza. Does the movie totally manipulate us and our emotions? Sure it does. Does it fall off the knife blade of believability? Watch the bit with the fire hose and make your own decision. But it delivers what it promises and is a hell of a ride. I’m a convert now!

Third trivia question – what item found in any US post office ends up allowing John to trick and beat Hans Gruber?