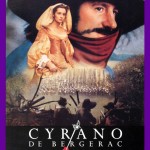 In honor of Edmund Rostand today’s film review is for Cyrano de Bergerac. It’s swashbuckling, it’s funny, it’s romantic and it’s ultimately tragic. It’s perfect for clearing out the tear ducts by either weeping in a hankie or crying in your beer. Whatever works for you.

Hercule Savinien Cyrano de Bergerac (Gerard Depardieu) is a man of many talents. A poet, wit and Cadet in a predominantly Gascon company he’s also got an enormous nose which he thinks will prevent him from ever being loved by the woman he’s loved for years, his distant cousin Roxane (Anne Brochet). Roxane is desired by the Comte de Guiche (Jacques Weber) who schemes to marry her off to a protege in order to then have her as his mistress.

But Roxane loves the handsome young Christian de Neuvillette (Vincent Perez), something she confesses to Cyrano as she begs him to watch out for Christian in the rough and tumble company of Gascons. Unable to deny her anything, Cyrano pledges to help his rival who, though handsome of face, is hopeless with words – something vitally important to Roxane, a preciouse.

Thus Cyrano provides the letters and words for Christian to woo Roxane culminating in a quick marriage to fend off the advances of de Guiche who then takes his revenge by ordering the Cadets to the front lines of the siege of Arras. Cyrano braves enemy lines to continue to send letters to Roxane, presumably written to her by Christian, and as the siege continues she falls in love with the “Christian” of the letters more than the handsome face.

Arriving at the siege just before a momentous battle, Roxane confesses this to Christian, telling him she’d love him even were he ugly. Determined to end the subterfuge, Christian urges Cyrano to tell her the truth to discover whom she would really choose. But just as Cyrano’s about to confess all, Christian is mortally wounded. Giving up the chance to win his love, Cyrano continues the charade even in the fourteen years after Christian’s death when Roxane retreats to a convent and mourns her lost husband.

Cyrano pays her weekly visits to update her on current gossip until one evening when enemies he’s made with his uncompromising opinions ambush and wound him. Staggering to the convent and knowing he’ll die from his wound, he begs Roxane to allow him to read “Christian’s” final letter. As he recites it from memory in the growing dusk, Roxane finally realizes the truth as she recognizes the voice which wooed her so many years before. Far gone in delirium, Cyrano “battles” past enemies then, rejoicing that he’s never lost his panache, he dies in Roxane’s arms.

The title of the film gives away who the most important character is and in Depardieu the film makers found the perfect man. He embodies the definition of the panache so important to Cyrano – someone who has a dashing confidence of style, or shows a certain flamboyance and courage. But he can also portray the reticence and yearning of a man hopelessly in love with a woman he feels he can never win. Depardieu straps this role on and for the duration of it he *is* Cyrano. Watch how he can deliver an impromptu poem even as he fights a duel then later see the heartbreaking look on his face after the famous balcony scene in which he finally wins Roxane for another man.

In the roles of Christian and Roxane, Perez and Brochet play the pretty people. These can be thankless roles since, let’s be honest, Christian is supposed to be a handsome idiot who can’t string three words together while Roxane can’t see the soul deep love that’s right – pardon the pun – under her nose.

Perez manages to convince me that Christian’s a romantic soul burdened by a lack of eloquence and tongue tied in the presence of the beautiful Roxane. He’s also man enough to want to ultimately win Roxane as himself rather than the product of Cyrano’s wordplay. But handsome as Perez is, he seems to shrink when onscreen with the larger than life performance Depardieu delivers.

Brochet is beautiful and luminous in her role. She can also deliver a mean “overcome by the poetry” swoon while reading the letters Cyrano writes. I’ve seen her performance panned but compared to other versions she does adequately present Roxane as an example of the 17th century intelligent, literary women of Paris who delighted in words and demanded wit and conversation from their men.

I’m able to excuse Roxane’s dreadful lack of insight because of a scene she shares with Cyrano during which she recalls their childhood. As Brochet plays it, we can see how she basically takes Cyrano for granted in her life yet still loves and cares for him as evinced by her concern over a wound he suffered while fighting almost a 100 men the night before. When the blinders finally fall from her eyes, I can see the truth of her finally realized love and the depths of her loss as this man leaves her life forever.

The French production is marvelous with costumes and scenery that sweep me to mid 17th century Paris but without too much ick. I don’t want an overabundance of ick clouding my teary eyed watching experience and ruining the moment. The music is simultaneously grand and romantic while also haunting and foreshadowing the tragic ending to come. The film featured thousands of extras and includes some dramatic battle sequences as well as a sequence I particularly like of the Gascon troops marching out of Paris in a torch lit night scene.

But the film isn’t constant pathos and drama. There’s a good bit of humor and comedy in it. Watch for how Cyrano distracts Roxane’s duenna (Josiane Stoléru) with the delicious cream puffs made in Ragueneau’s (Roland Bertin) pÃ¢tisserie. Meanwhile, Ragueneau agonizes over his – subpar – poems which his exasperated wife is now using to wrap bakery sales with. There’s also physical comedy from Cyrano and Christian as they duck and dodge Roxane while delivering letters in Paris.

And swashbuckling. Let’s not forget that. Cyrano fights a duel while delivering a poem then takes on a bully brigade single handedly. The swaggering machismo and eagerness of the Gascon cadets to perceive insult in nothing and be ready to fight at the drop of a hat are seen both in Paris and during the siege. I also love the comeuppance Cyrano delivers to de Guiche – also at the siege – when he whips out a scarf dropped by the Comte as he fled during the heat of battle and which Cyrano casually announces he picked up as he charged into it.

This is a vastly entertaining movie from many angles. It also makes me wish I had kept up my French language lessons. The English subtitles use Anthony Burgess’s translation of the text, which preserves the rhyming of the original, but I can only imagine the power of the story in the original French. I’ve watched it a couple of times in the past weeks and can honestly say I think it gets better with each viewing. Check it out if you’ve never seen it and see if you agree. B+

Oh, that’s right, I promised a word or three on another version that might interest some and here we go. It’s the silent 1925 edition which I found holds up remarkably well 86 years later. It’s long for a silent film clocking in at 113 minutes. The title cards might take a little bit of time to get used to as they’re shown in a dual language Spanish/English translation. I like the hand coloring that’s been done and am amazed at the 3 year effort that took.

Cyrano is played by middle aged Pierre Magnier who is stuck with an awful hat and clown mustaches but still manages to show such depth of feeling for Roxane. Linda Moglia is little more than a pretty twit while Angelo Ferrari as Christian is given enough raccoon eye liner to make Johnny Depp jealous.

The crowd and battle scenes are surprisingly extensive for the day. Watch for the great opening sequences of Paris. The musical score is much better than most heard in silent films and conveys not only the emotion and action of the scenes but also serves as sort of early foley sound effects.

It’s certainly not up to the 1990 one but it’s worth looking for just for comparison.

→ Jayne
Previous article: REVIEW: Two Against the Odds by Joan Kilby
Next Post: Welcome to the New World of Publishing