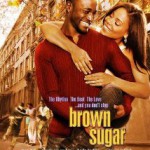 Since I’ve started doing these Friday Film Reviews, I’ve been trying to expand my film horizons. Netflix has helped since it makes it relatively easy to try new-to-me films and actors and “Brown Sugar” is a case in point. I’d seen Sanaa Lathan and Taye Diggs in other films (some of which will be featured in coming reviews) but together in this film, they’re magic.

“Sidney (Sanaa Lathan) and Dre (Taye Diggs) trace their friendship and the launch of their careers to a single childhood instant: the day they discovered hip-hop on a New York street corner. Now, 15 years later, both have successful music industry careers. As Sidney, a revered music critic, and Dre, a successful but unfulfilled music executive, lay down tracks toward their futures, something keeps them coming back to that moment on the street corner.”

You don’t have to love, or even like, hip-hop music to appreciate this film. However if you do enjoy it, the soundtrack should do wonders for you. Also look for cameo appearances by several hip-hop stars. The characters’ love of the music serves as the backbone of the film and the motivation for many of their actions so it discussed often – almost like the love for a boyfriend or girlfriend.

Sanaa Lathan is an actress who I think is fabulous and one who throws herself into her roles. Here she stars with Taye Diggs who is reason enough to spend time watching the film. Now, now, I know I’ve mentioned how shallow I am about handsome men before. Anyway, they make it easy to believe the long relationship their characters have had and why everyone around them knows that they’re The Ones for each other – even if they stubbornly refuse to see it themselves. They laugh together, tease each other and confide their deepest hopes and wishes to each other in a way that shows they won’t just be lovers but also best friends.

But they have a long road to travel before their final hookup and it’s nice to see realistic, believable characters in a romantic movie that avoids silly setups and outlandish plot twists. The significant others in their lives, Dre’s wife Reese (Nicole Ari Parker) and Sid’s fiance Kelby (Boris Kodjoe), don’t turn into shrews or asshats to further the plot and bring the main characters together. Instead, they are nice people who simply aren’t right for HEAs with Dre and Sid.

Another of my favorite actors, Queen Latifah plays Sid’s cousin Francine and is given some great scenes such as when she helps Sid unpack and finds Sid’s massager from Brookstone and also when she loudly urges Sid to protest during Dre’s wedding, much to Sid’s embarrassment. Scene stealing Mos Def is a young hip-hop artist Dre is hot to sign to his new record label and I couldn’t help but watch him every time he was on screen. He and Queen Latifah also have a sort-of secondary romance going on which I would love to have seen expanded.

While the ending is formulaic, it’s still satisfying and I laughed to see the note Dre holds up when he asks Sid to go out with him when she’s in the middle of a radio interview. “Brown Sugar” has adult characters acting like adults. They might not always be perfect and they do make mistakes but I never groaned with disbelief at their actions and I did feel the emotions they were trying to convey. The film has an average rating at Netflix and IMDB but don’t let that dissuade you from trying it. It’s an understated charmer which exceeded my expectations as I hope it will yours.