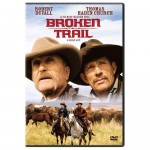 Ah, the beauty of the West, of a herd of wild horses, of a campfire crackling at night, of a group of young Chinese women being driven to a fate worse than death in a rough hewn mining camp – wait, back up, strike that. Let’s start again. Last fall I reviewed another movie, “Thousand Pieces of Gold,” set in the old west featuring a young Chinese woman who is sold across the Pacific to be a prostitute but who manages to escape and build a better life for herself. At the time, I mentioned that movie reminded me of aspects of this one and now I’ve finally had the time to watch it again and review it.

It’s 1898 and Print Ritter (Robert Duvall) is riding up to a cow camp in Oregon where his estranged nephew Tom Harte (Thomas Haden Church) is working. Print brings Tom a letter from his (Tom’s) dead mother and the news that she left Print, her brother, her estate. Print then proposes a plan to square things with Tom. The two of them will round up a herd of wild horses and drive them 800 miles to Wyoming to sell to the government then divide the profits. Seeing a way out of a future becoming a broken down man tending another man’s cattle, Tom agrees.

Still settling into a relationship, the two begin the journey and quickly pick up an itinerant Virginian, Heck Gilpin (Scott Cooper), to help with the herd. A little while later, they come across a suspicious man, Billy Fender (James Russo), driving a wagon full of young Chinese women (Jadyn Wong, Olivia Cheng, Caroline Chan, Gwendoline Yeo, and Valerie Tian). It quickly becomes obvious what he’s driving them to – a mining camp where they’ll be prostitutes – and that he’s already sexually abused one of them. Though the men find him distasteful, their initial plan is just to part ways with him in the morning. Until they wake up to discover he’s drugged them, stolen their horses and left them with the women.

Tom takes Fender’s old horse and tracks the man down, dealing out the Old West justice for a horse thief. But the men are now faced with the question of what to do with the women.
When they try to leave them at the mining town, they discover there’s no law there and are told by Lung Hay (Donald Fong) that slitting the womens’ throats would be a kinder fate. With no other choice, they decide to take the women with them along with an older whore Nola Johns (Greta Scacchi) who’s desperate to get out of town.

But Big Rump Kate (Rusty Schwimmer) the Madame who paid for the “Celestials” for her business isn’t about to let her investment slip through her fingers and she recruits Ed “Big Ears” Bywaters (Chris Mulkey) to go after them. Will Print and Tom get the horses and the women safely through to Wyoming before Bywaters and his ruffians catch them? And is there any hope for a romantic future for Tom or Print?

At a roughly 3 hour running time, the made for TV movie takes its time – and I wouldn’t have it any other way. There is time to develop the plot, the characters and their interactions with each other as well as show the magnificent scenery of Alberta, Canada which stands in for Oregon and Wyoming. There’s enough mud for realism and the towns have a rough “just hacked out of the wilderness” quality. The whores don’t wear satin dresses or feathers in their hair while the men’s hats have a nice “broken in” look to them. It’s obvious that the production crew took time to try and get the details right.

Robert Duvall is the obvious star of the show but only because of his great acting and ability to bring out the best in his coworkers. He’s at home on a horse and as Print has a gruff charm that reassures the frightened women who don’t speak a word of English. I figured before things started that he’d be just fine in his role but it’s Haden Church who surprised me. As one person said, he’s come a long way since “Wings.” He’s not trying to play the handsome, younger man role – in fact he looks kind of rough around the edges. The John Wayne quote “Talk low, talk slow and don’t talk too much” describes the character of Tom to a T. But along with his uncle, he’s a decent man who can’t simply abandon these women.

Another thing I like about this film is how it treats the female characters with respect. They aren’t just pale shadows upon whom wrong is done merely to serve as an excuse to goad the men to action. Greta Scacchi, in a wonderful character role, gives Print an unsentimental view of life as an aging prostitute. As the film progresses, she slowly regains her dignity – like a wilted flower given water – and ends up forging her own future. The Chinese women, despite their situation, provide some subtle wry humor as they comment among themselves about these strange men with whom they’ve ended up. I wish there had been more time allotted to differentiate between their characters but as it the two I remember best are Gwendoline Yeo – who goes after a relationship she wants – and Valerie Tian – who plays a woman whose feet were bound and who often has to be carried around. Hell, even Big Rump Kate – you’ll understand the nickname after seeing the movie – is a strong woman who takes nonsense from no man and who is a force to be reckoned with in the area.

The movie is filled with big sprawling scenery but manages to stay focused on the character driven plot. It has a natural, low key feel as the emotions flow from the acting and aren’t forced. I get the feeling that I’m seeing how life really was back in the day when life was still hard for everyone but especially still for women who had few options for survival. There is plenty of violence so be warned. But the chemistry between all the actors is superb and if you’re looking for a Western to sink your teeth into, it’s a film I highly recommend.

→ Jayne
Previous article: REVIEW: The Chase by Erin McCarthy
Next Post: Friday Midday Links: Game of Thrones is for boys; Meyers vampires are all white.