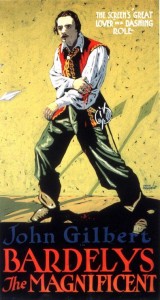 Based on yet another Rafael Sabatini novel, “Bardelys the Magnificent” must have wowed audiences of 1926 with its dashing star John Gilbert wooing lovely Eleanor Boardman before escaping death at the hands of the evil villain. Long thought lost except for a few key scenes, an almost complete copy was discovered in France in 2006 and has now been restored and released along with another silent film, “Monte Cristo.”

Bon vivant, noted lover and wit Christian, Marquis de Bardelys (John Gilbert) is the toast of the court of Louis XVIII (Arthur Lubin). Women want him and men want to be him but Bardelys has never found a woman who he wants to marry. So when Chatellerault (Roy D’Arcy), a man spurned in love, issues a challenge that Bardelys can’t woo and win the hand of the lovely Roxallane de Lavedan (Eleanor Boardman) within three months, Bardelys initially balks. But after he’s tricked into the bet, he sets off to the country estate of the Vicomte de Lavedan (Lionel Belmore).

Along the way, he meets a dying man, Lesperon (Theodore von Eltz) who is leading a revolt against the King and is then mistaken for him by some Musketeers. Wounded, he seeks refuge at the home of Lavedan and finally meets the lovely Roxallane. In her he finds the woman of his heart but after she declares her love for him, he is struck silent in shame at the betrayal he has carried on by not telling her who he really is. Angry at his actions, or lack of them, she turns him over to the authorities. At his trial he meets up with Chatellerault who is one of the judges who takes this opportunity to condemn his rival to death. Will de Bardelys be able to escape his appointment with death as a traitor to his King and also save his love from marriage to the villain?

Despite being found in poor condition, the restoration of the film is wonderful and it has a choice of either orchestrated or piano accompaniment. I had read that the third reel is missing and had been bridged by the use of still stock photos and dialogue screens. Since this is a silent film anyway, I don’t think it makes a big impact on the film as a whole. The sets and costumes are lavish and though I wish there had been a bit more dialogue, it’s fairly easy to follow along the action.

Eleanor Boardman makes a lovely heroine though John Gilbert initially looks a bit oily but with great lines of hero dialogue! And the dialogue isn’t just heroic, there’s a fair amount of wit and humor as befits a Sabatini novel adaptation. D’Arcy is a menacing villain with a perpetual sneer on his face though Gilbert finally takes him down in a swordfight that looks eerily like the ones to come from Flynn and Rathbone.

Some of the earlier fights are laughable – watch for a bendy rapier in the fight at the inn – but Bardelys’s escape from the gallows is amazing to watch and includes mosh pit dives, daring acrobatics and the clever use of a long pike. Douglas Fairbanks has nothing on this. But the part to be sure you pay attention to is the one long thought to be the only surviving bit from the film and that is the romantic wooing between Bardelys and Roxallane. It takes place in a punt along the river bank and is hauntingly beautiful as the long willow fronds cast shadows over the two lovers while they drift through them.

Some of the scenes are a touch overwrought but are balanced by some fine acting on the part of Gilbert and Boardman. Though it’s not quite up to the Sabatini adaptations which followed, it’s still a marvelous example of early movie swashbuckling and romance and one which I’m delighted has been miraculously restored to us. B-

→ Jayne
Previous article: REVIEW: Once and For All by Jeannie Watt
Next Post: REVIEW: Her Abundant Joy by Lyn Cote