J.B. Merlin: I don’t care who the father is, I’m the grandfather! 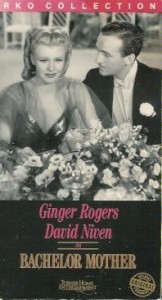 Finding a New Year’s Eve movie is tough and I’d almost given up until I remembered this one. It’s got humor, dancing, a sweet romance, a cute baby and one determined grandfather.

Polly Parrish (Ginger Rogers), a seasonal employee at the Merlin Department Store in NYC, is mistaken as the mother of a baby left at a foundling home. Determined to reunite mother and son, the foundling home director appeals to the store owner’s playboy son David Merlin (David Niven) not to release her after the Christmas season. David falls in with the program and though Polly gets to keep her job, no one will believe her when she says she’s not the mother of that baby. Taken with Polly and the baby, whom she starts to call John, David invents excuses to see her and quickly begins to fall in love. But it’s not until his father J.B. Merlin (Charles Coburn) mistakenly believes that the baby is his grandson and tries to get his son to marry Polly to get his hands on the boy that David realizes his feelings. Can he convince Polly he’s genuinely fallen in love and is ready for an instant family? It’s Ginger without Fred and here I don’t miss him at all as she proves she can act as well as dance. Rogers and Niven have got great chemistry and the film zips along quickly with a compact yet intricate plot though it never feels rushed. In true screwball fashion, the rich David has fun poked at him such as when he tries to instruct Polly on the new “scientific” way to feed a baby or learns how difficult the Merlin store’s return policy is for defective merchandise. Then the two of them together go overboard in trying to out do another couple taking their baby for an outing in Central Park.

Ginger does get to dance some, though it’s with a fellow employee in an attempt to win a dance contest for extra money, and as usual looks lovely while doing it. The store scenes are view of a lost world of abundant clerks, uniformed bell boys, and boutonniered floor managers. Check out Polly’s huge – for NYC – prewar apartment too. But it’s the part where David gets stood up for New Year’s Eve and in desperation calls Polly to be his date that are the funniest. Watch how he gets around having to introduce his lovely date to the male sharks at the party and listen for Polly’s priceless put down of a snarky society barracuda. The scene also serves as an eye opener for David who realizes the “quality” of the company he kept before meeting Polly. Charles Coburn is delightful, as always, as David’s father who despairs of his son growing up, settling down and producing a grandson. His methods of trying to get David to do the right thing are slightly heavy handed but then he’s supposed to a rich tycoon used to having his own way. Another nice secondary role is that of Polly’s amazingly kind and baby-sitter-available landlady Mrs. Weiss (Ferike Boros). Donald Duck has a bit part as the toys Polly sells and the means of finally getting the David and Polly together. One thing that strikes me after repeated viewings is the fact that no one in the Hays Code era 1939 film condemns Polly for being thought an unwed mother. And all the coercions that take place are done with the best intentions by people trying to reunite those who they consider to be mother and son. If you don’t want to think about all that, then just watch it as a light hearted bit of froth filled with misunderstandings that features a non-assholic wealthy boss falling for working class woman – a sweet Harlequin Presents, if you will. Happy New Year everyone!

→ Jayne
Previous article: What Jayne’s Been Reading and Watching – November and most of December
Next Post: REVIEW: Unraveled by Courtney Milan