“This is developing into a very bad habit!” – Mortimer Brewster 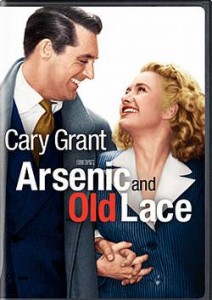 I had always heard great things about “Arsenic and Old Lace,” but the first time I sat down and tried to watch this film years ago my reaction was a rip roaring “meh.” After that, I raised an “yeah, right” eyebrow whenever I saw people gushing about how fabulous and wonderful it is. But if nothing else, doing these movie reviews has gotten me to (re) watch a whole lot of movies I never thought I would and searching for this year’s Halloween entry coincided with a broadcast of the film on TCM. With nothing, including even an Netflix rental fee, to lose I set my DVD-R then finally discovered why people love it so much.

Mortimer Brewster (Cary Grant) and Elaine Harper (Priscilla Lane) have just gotten married and stopped off at their respective houses – which are just across an old cemetery from each other – to pick up some things before heading to their honeymoon at Niagara Falls. Mortimer has been raised by his two eccentric aunts Abby (Josephine Hull) and Martha (Jean Adair) along with their brother (John Alexander) who thinks he’s Teddy Roosevelt, blows a trumpet and charges up the staircase like it’s San Juan Hill. To his horror, Mortimer discovers that there’s a dead body in the window seat and assumes that delusional Teddy has killed someone. But Mortimer is flabbergasted when Abby and Martha calmly tell him that they killed the gentleman as well as eleven other older men. They see it as a charity to end what they see as the suffering of lonely old bachelors and use elderberry wine spiked with arsenic, strychnine and “just a pinch of cyanide.” A stunned Mortimer muses that the wine probably tastes pretty good. Teddy always buries the bodies in the basement assuming that they are yellow fever victims from the building of the Panama Canal.

Frantic to save Teddy from any charges, Mortimer tries to get the papers that will get him committed to a sanitarium in the care of Mr. Witherspoon (Edward Everett Horton) and fobs off an increasingly irate Elaine as to when they’ll leave for their honeymoon. But wait, things are about to get worse. 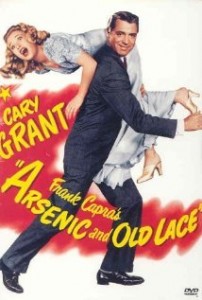 Can Mortimer get Teddy committed – the neighbors are complaining about the trumpet blowing, keep his aunts from killing any more nice, old men and out of jail, get Jonathon and Einstein out of the house, keep Elaine from getting a divorce before the wedding night and keep the police from finding out everything? The main reason I didn’t like the movie the first time is Grant’s OTT performance. Since then, I’ve come to appreciate screwball comedies in general and the fact that sane Mortimer is the one going crazy while his crazy relatives are calm and collected. While everyone else acts like there’s nothing wrong, it’s an increasingly frantic Mortimer who has to juggle all these plot threads and keep the movie from spinning out of control. I still think he’s slightly crazed at times but that’s the nature of the film. 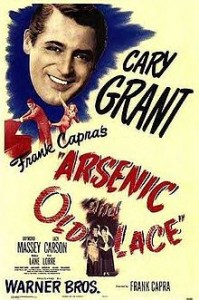 Hull and Adair are darling as the doting, dotty but lethal ladies of the Brewster family. I love Aunt Abby’s feather ruffled outrage at Mr. Spenalzo (a foreigner!”) in her window seat as well as how mad she and Martha are when Einstein puts Spenalzo in the same grave with good Methodist Mr. Hoskins. Raymond Massey is menacing as brother Jonathan with his black bag full of gulp inducing instruments. Lorre is hilarious as the schnapps swilling doctor who tries to keep Jonathan from killing his own family (“No! Not the Melbourne method, please! Two hours!”) I don’t care as much for Lane as Elaine. She looks too much like Ginger Rogers and I keep expecting to see Rogers in her place. But she’s adequate in the role.

There are several wonderful actors in secondary roles including Horton doing his usual slightly prissy routine, James Gleason as the harried police lieutenant dealing with beat cop Jack Carson. I can’t recall ever seeing Alexander before but he does a great T.R. impersonation. Also watch for the long suffering taxi driver played by Garry Owen. Director Frank Capra manages to present the story without showing any dead bodies or much violence. Instead he uses shadows, noise, music, Jonathan’s awful looking instruments and Peter Lorre’s actions and reactions to instill apprehension and infer the fight scene without having to be graphic. With the Hays Code in effect I did wonder at the aunts actually getting away with murder but they do end up in a position where they won’t be able to continue their charitable work and, after all, Jonathan’s crimes are so much worse. When watching the scenes of unsuspecting Mortimer, and later the police officer, talking about danger while all the while the danger their describing perfectly mirrors the actual danger sneaking up behind them, remember that this started out as a Broadway play and this would probably have played especially well on stage. Boris Karloff was also playing Jonathan in the play hence the jokes about Jonathan looking “kind of like Boris Karloff.”

I am an “Arsenic and Old Lace” convert now. I will anticipate the sequence of Einstein and Jonathan bringing Mr. Spenalzo through the window (“Wait a minute, Johnny. You lost a leg somewhere.”) As well, the hilarious “contest” between the Aunts and Jonathan as to who has killed more people. (“No, no, Johnny. You cannot count him. You got twelve, they got twelve. The old ladies is just as good as you are!’) But most of all, I will enjoy it for the things Capra managed – tension mixed with laughs and murders without ever seeing more than the shadow of a dead body. B

“Oh, don’t worry about Halloween. The pixies won’t be out till after midnight.” – Mortimer Brewster

→ Jayne
Previous article: REVIEW: You Are My Only by Beth Kephart
Next Post: REVIEW: Holly Lane by Toni Blake