Today we serve up our final post in our five-part Bridgerton discussion series. You can find the first four posts here:

In Part III we talked about Simon and Daphne’s Courtship.

Part IV was about Simon and Daphne’s marriage, including the highly controversial scene, and about Anthony.

Layla: One of the more interesting themes running in the show is the position of women in society. We didn’t spend much time talking about Eloise and Penelope, or Marina and Daphne, but I think the range of depictions of young women, their lives, choices and anxieties, is one of the things I enjoyed the most about the show.

Layla: Most of the women depicted are upper class (some exceptions are the modiste and Sienna) but despite its focus on aristocratic women, the show nevertheless gives us, in my opinion, a range and depth of depictions of women’s problems in 18th century British society.

This is a time when women had famously limited options, virtually no rights, and limited power and mobility in society. In fact, marriage is one of the only paths for any power or social mobility for women, and we see that narrative unfold in both Marina and Daphne’s storylines.

While I didn’t love Daphne the character or Phoebe Dynevor’s depiction of her, I could sympathize with her plight and the dilemmas she is faced with. If Eloise resists the ideas of marriage and motherhood, in many ways she is the most ‘feminist’ figure, then Daphne succumbs to them.

But in Daphne’s depiction I think we see a very important narrative about feminism and what it can be—it’s not always strident, overt, institutionally challenging or path breaking—it is often quiet and mundane and quotidian, shaped by women’s lived experiences and reality. 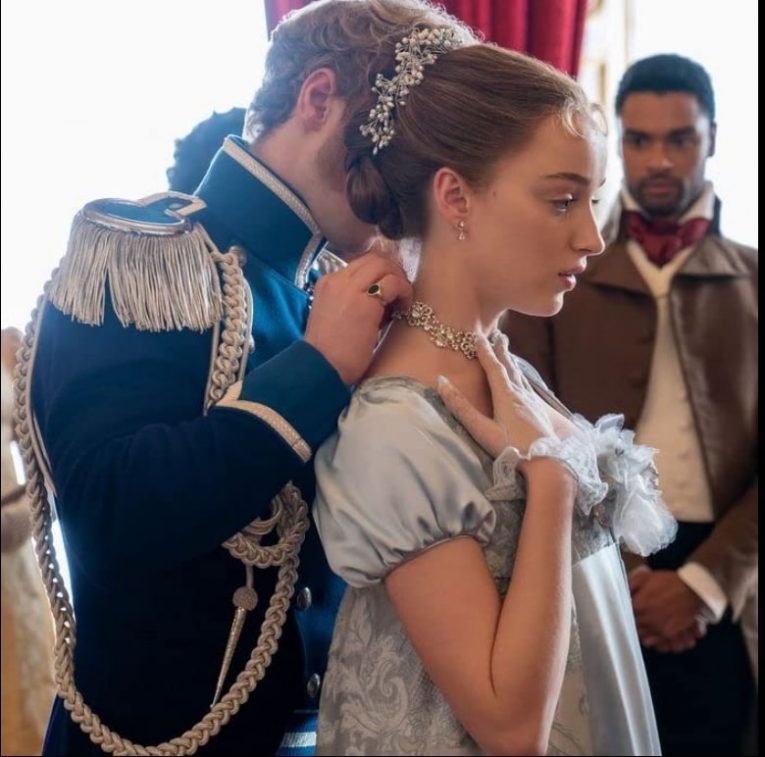 Daphne is not a feminist in the 20th and 21st century sense—nor is she one by some of the conventional the standards of the Regency romance either (a bluestocking or suffragette)—but in her narrative, we see the limitations in women’s choices. She is ambitious where she is able to be—in securing a marriage. She wants to have a partner with who she can connect, she is repulsed by Lord Berbrooke, but she pursues the prince too. She wants to succeed as a debutante because it is what is expected and what will help her family, but also because it is one of the only realms in which she is allowed success.

Janine: That’s such a terrific point. I too liked that aspect of Daphne’s portrayal, not so much for the character herself, but as you say, because it points to the fact that marriage was the key to mobility and agency for the vast majority of upper-class women. That aspect is so much the focus of 19th century historical romances but often it is taken for granted in the books that in that world this is just how things are, and not examined to this degree. For all its fantasy aspects, the show delineates and underscores the stark nature of that reality—marriage or nothing—that so many women of the aristocracy faced, more than many a book. It’s not romanticized as much.

Layla: Eloise is an interesting foil to Daphne—although I LOVED her character, I did wonder about how the show would realistically allow her to flourish. Her idealism is part of what I liked about her, but her smug assurance that her sister’s ambitions were not worthy made think of her as somewhat naïve or immature.

Janine: Hmm yes, there doesn’t seem to be a wholly believable path for Eloise to come into her own. Daphne and Eloise are contrasted and present different aspects of late 18th/early 19th century womanhood: acceptance and pragmatism of the status quo versus suspicion of it and an idealistic commitment to other paths to power and autonomy. But a powerful subtext to their sisterly friction over these issues as well as to their love for each other is that the higher up Daphne marries, the more power and therefore agency (at least as far as making a good match, if nothing else) Eloise would be afforded.

It was such an inherent truth underpinning their relationship that I wanted Eloise to acknowledge it more than she did. Like you, I liked her as she was and a greater concession to this truth might have lessened her appeal. Nevertheless, there it was, undergirding their relationship. 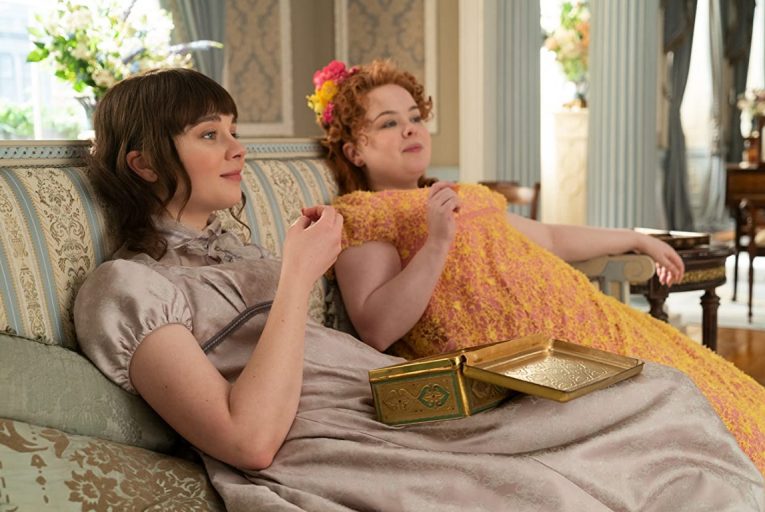 Layla: Two quick final notes on Penelope and Marina. It was interesting that these two women were paired—Penelope is a lovely character, clever and kind and observant. Actress Nicola Coughlan did a marvelous job. Penelope is also insecure, somewhat shy, and obviously devious. The two sides of her character, I hope the show explores her more—and again I found it refreshing to have female characters that not only don’t conform to a norm of beauty, but that had dimension and depth.

Janine: Yeah. I wish we’d had the time and space to get into Penelope and Eloise’s friendship, too, because it was a lovely depiction of how women can draw strength from friendships with other women. Claudia Jessie, as well as Coughlan, did a good job there and thanks to their friendship the show aced the Bechdel Test.

Layla: Marina was more problematic—she had an interesting backstory and a potentially good love story, but her transformation from victim to villain didn’t feel good. I didn’t like her deception with Colin, although the show tried to show us that women in her position had few choices. Her strength of character was sometimes construed at least by me, as arrogance. And her idealism and rebelliousness, while refreshing, did sometimes come across as too “modern.”

Janine: I agree with most of your points; however, I think Marina’s arrogance was contrived and I resented the writers’ choice to write her this way. To a large degree, as a friend of mine said (and I agree), her cruelty to Penelope was there to justify Penelope’s undermining of Marina’s goals. Her characterization was all over the place and that’s a sure sign that the writers didn’t care as much about her character—that at times she served as a plot device more than as a consistent, multidimensional human being. I don’t put that on actress Ruby Barker, it’s all squarely on the writers IMO.

Janine: Overall, although she show wasn’t deep or very nuanced, I felt that it had strong pacing and I liked that it had more bite than the book. I enjoyed the way the swoony elements represented by Simon and Daphne come up against a jaded, slightly cynical framing via Lady Whistledown, the Queen, and Eloise. 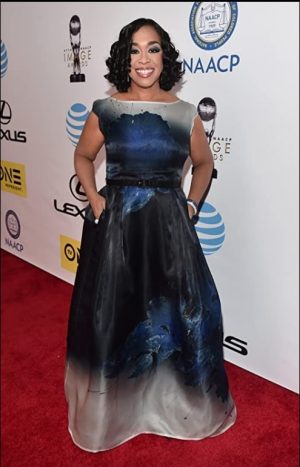 These two elements, cynicism and romanticism, act on the viewer as windows to two sides of the marriage mart. The necessary but also mercenary aspects of the marriage mart, which you’ve touched on, compete with true desire and with personal happiness. This is one of the keys to the show’s success. I also appreciated the use of period-influenced language in the dialogue. Modern language can pull me out of a historical novel faster than anything else.

The writers also hit the beats and plot turns strongly. I loved the way the writers can pack a lot into one scene. The almost-duel is a great example, with one emotion-action-revelation coming on the heels of another. Daphne’s decision to marry Simon locks them both in. It’s not clear to Daphne if Simon really wants that and Simon doesn’t know if Daphne meant it or was only trying to save her brother’s life. The way the duel and the decision to marry are bound up in one another is just brilliant.

There were plot holes, though, from the offensive to the weird. The biggest was the way the aftermath of the rape was treated or rather not treated at all. More generally, Daphne’s sense of entitlement wasn’t called out. 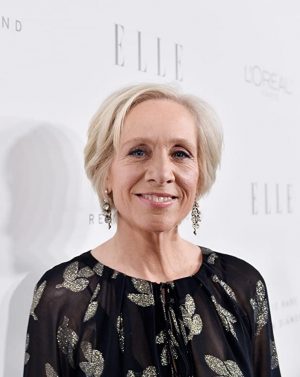 But there were smaller inconsistencies, too. For example, Anthony’s acceptance of Nigel Berbrooke’s proposal on Daphne’s behalf without consulting Daphne and even though Nigel was far more objectionable than the suitors Anthony had previously rejected. Objectionability had been Anthony’s disqualifying criteria then, so this made no sense, not even after the talk Violet had with him.

I feel the same regarding Anthony’s decision to challenge Simon to a duel. Anthony did this out of fury with Simon for embroiling Daphne in a potential scandal, but the scandal hadn’t yet materialized and a duel would only ensure it did. A duel would have caused a worse scandal. If Anthony or Simon had been injured or killed, or had to flee to the continent because duels were illegal and they’d been found out, there would be no way for Daphne to live that down.

I was also befuddled when, after the Prussian Prince Friedrich gave Daphne a priceless necklace, she took it off in the garden and placed it atop a garden wall. Simon showed up and if I recall correctly, they kissed. Then they went back in and the diamond necklace was left outside!

Still, and though I was disappointed with the way the writers handled Daphne’s rape of Simon, I felt the show had a lot of entertainment value and kudos to executive producers Shonda Rhimes and Betsy Beers as well as to showrunner Chris Van Dusen for that. 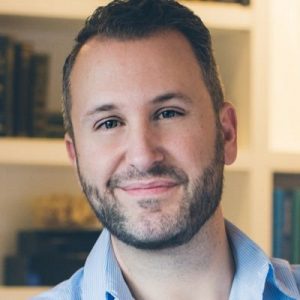 Layla: Despite its problems, I loved this series so much. I loved the costumes, the drama, the fantastical and historical aspects, much of the acting and Regé-Jean Page. I am so excited to see more!

I was so happy to be living in a fantasy in which women were constrained and yet empowered. That’s what historical romance is about—in some ways not rewriting history, but reimagining it from a woman’s perspective. And that was the most powerful thing of all for me with Shonda Rhimes and her cast and writers.

After finishing the show, I was reminded of the writing of Mary Wollstonecraft. Her essay, A Vindication of the Rights of Woman, written in 1792, argues against the prevailing opinions of the time that gender disabled women intellectually.

Wollstonecraft fought against ideas of women’s inferior intellect, and instead described the consequences of depriving women of the opportunity to train their minds. “How grossly do they insult us who thus advise us to only render ourselves as gentle domestic brutes!” 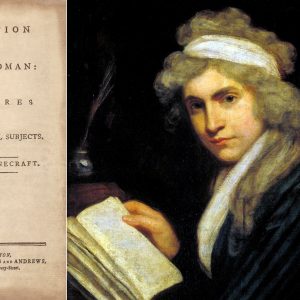 She wrote a plea to her female readers—

I wish to point out what true dignity and human happiness consists—I wish to persuade women to endeavor to acquire strength, both of mind and body, and to convince them that the soft phrases, susceptibility of heart, delicacy of sentiment and refinement of taste are almost synonymous with epithets of weakness.

One of the things the show does best—aside from fantastic fashions and lush scenery—is remind us of how women navigated the social rules in pursuit of dignity and happiness. The domestic sphere—marriage, motherhood, sex, and love—prove that women are strong of mind and body. The idea of the “gentle domestic brute” is the fiction—and its antidote is narrative and imagination.