Our Bridgerton discussion, which began yesterday with a conversation about the show’s worldbuilding, its treatment of race, and Lady Whistledown, continues today. Today we discuss the show’s matriarchs–the queen, Lady Violet, Lady Danbury and Lady Featherington. –Janine

Janine: The show’s choice to cast a Black actress as Queen Charlotte in the nod to the real Queen Charlotte’s likely ancestry was brilliant for the reasons we mentioned yesterday. But there’s a lot more to Golda Rosheuvel’s role in the success of the series. You can tell Rosheuvel is having a lot of fun with the role. She’s this bored monarch whose tune everyone else has to dance to, and Rosheuvel brings this secret delight into the character. The queen loves her power and the way others jump when she flexes it. She can convey saucy amusement with just the lift of her eyebrow. Like Lady Whistledown’s narration, her expressions can verge on conspiratorial, and the person she is in league with is the viewer. 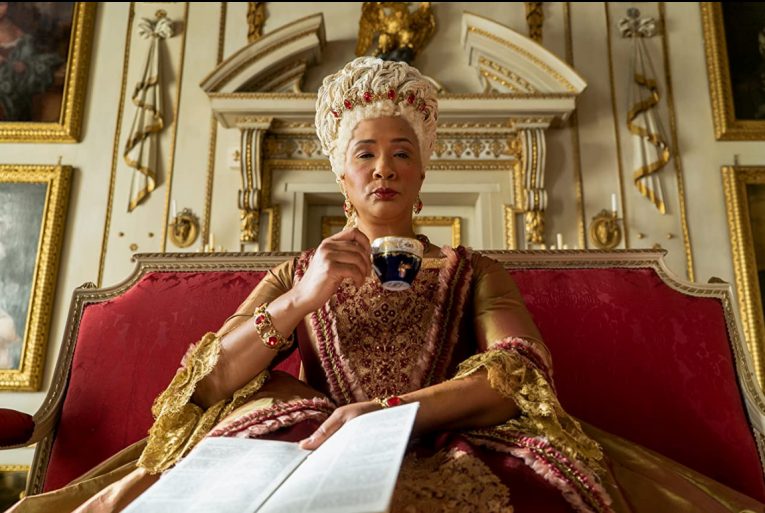 The queen’s interest in unmasking Lady Whistledown is played as an extension of that. Lady Whistledown holds the threat of scandal over the ton but the queen is the one who is the ultimate arbiter of that. If she bestows her favor on someone, she can instantly elevate them and if she takes it away, they may feel humbled or humiliated. We see this with her change of attitude toward Daphne. I don’t think she feels threatened by Lady Whistledown’s implications that she may have been wrong; it’s more that she chafes at it and she’ll do what’s required to prove she’s boss. And you definitely get the idea that she doesn’t suffer fools gladly. Even her testiness has a big impact.

Layla: You’ve articulated so many things that I enjoyed about the queen as a character and in particular, about Rosheuvel’s performance. I found her to be a really delightful fun character, I loved her various costumes and hairdos, and her reactions and manipulations bring some comic relief to the narrative. She is as you imply, both a serious powerful and tragic character and a vulnerable comedic character. She works beautifully as a nemesis or foil for Lady Whistledown—they both exercise power in a world in which women’s power is limited. The queen is limited by her race or gender, and exercises power in the only realm she is able—the social realm. Lady Whistledown exercises it through her publication, her anonymity, and her critiques of society. This is an important part of the show’s feminist sensibility.

Janine: The Bridgertons are a large brood and I liked that even when upset with each other, they were nothing but loyal to and protective of one another. There was a good balance between conflicts and warmth. Their mother, Lady Violet, contributed a lot to that—she held the family together and shepherded them through thick and thin. And she personifies maternal love when she provides a shoulder to cry on or a listening ear. She and Daphne share a special bond, I think. 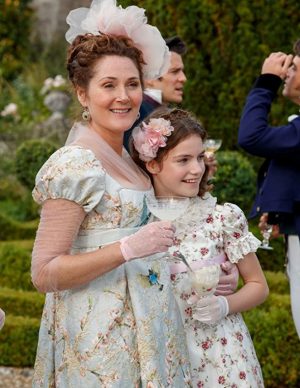 But Lady Violet has strength, too. She stands up to Anthony about his over-vetting of Daphne’s suitors, and after the Colin/Marina debacle, she gives Lady Featherington “the cut direct.” I loved how she outsmarted Daphne’s harassing suitor, Nigel Berbrooke. Actress Ruth Gemmell is very good; she can utilize small facial expressions, like the clearing of a brow, to great effect.

Layla: I would add Lady Danbury to the “mothers” category as a kind of honorary mother. She is also a foil to Lady Whistledown—in fact, she is much like her in voice, and in wisdom. She sees people’s faults, frailties and scandalous tendencies, yet she is tender and warm and protective with those she loves. I like how she mentors Daphne after her marriage, and the way that she mothers and rescues Simon. I loved her costumes, and the actress who played her, Adjoah Andoh, is so charismatic she takes over any scene she’s in.

Janine: Yes, she’s lovely. She plays Lady Danbury so well that it’s hard to imagine anyone else in the role. She’s the mother Simon needs, not afraid to stand up to his father or to him, which takes a spine of steel. She’s not too interfering in Simon’s life in adulthood, but neither is she laissez faire. Andoh conveys beauty and strength with a regal posture and eagle eyes. I agree on the costumes, and I love the way she uses her stick. Andoh’s performance in a scene in which Lady Danbury invites Daphne to a ladies’ gathering that turns out to be a secret gaming club is gold. 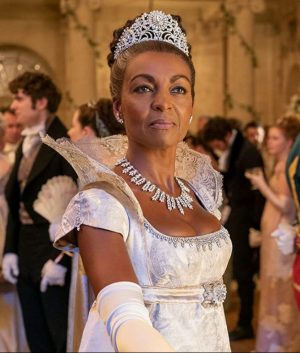 Layla: Simon’s dead mother is valorized—its implied that many of his good qualities are inherited from her and the loyalty of her friends like Lady Danbury also make her out to be saintly and good. I loved how the show celebrated mothers. Even Lady Featherington, who is in some ways a villain, is doing it out of love for her daughters. In the end, in a twisted way, she is trying to mother Marina.

Janine: The Featheringtons serve as a contrast to the Bridgertons. Theirs is not a happy family. I liked Polly Walker’s performance; Lady Featherington’s desperation on her daughters’ behalf was at times comical and yet it led to painful consequences for Marina and Penelope. Even as a member of the ton, Lady Featherington feels she is on the outside looking in. The costumes—the way she and her daughters dress differently from others—get that across too.

A shoutout here to Ben Miller, who plays Lord Featherington. He is the epitome of a man who has checked out of his marriage and family life. His dry indifference was a betrayal of his daughters but there were times it cracked me up.

Layla: The mother I loved the most was Lady Violet—she wasn’t a saint or a villain, she had dimension. I like how the show complicates her relationship with Daphne—at one point Daphne is angry at her and I found that scene heartbreaking. That scene is doubly searing and painful because it shows how women’s oppression is maintained through ignorance—so much so that women are not only estranged from their own bodies, but the social constraints about sex and pregnancy limit language and communication. Lady Violet has given birth to eight children—presumably she has had sex—but her lack of knowledge and ability to speak about intimacy end up inadvertently hurting her daughter. 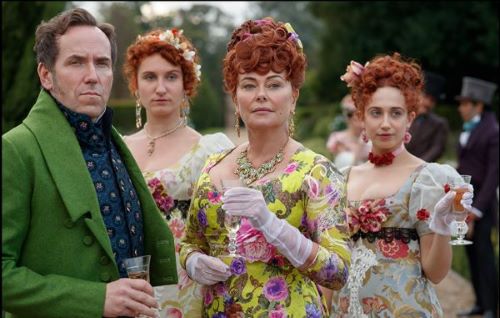 Janine: Great point. That was a terrific scene and I really like that you highlighted how limited women were by their inability to converse freely about sex. Their ignorance fettered them. When I think about how this worked to uphold patriarchal power it makes me angry. Daphne had a right to know. Violet had a right to communicate the needed information to her daughter.

Layla: The tense scenes between Violet and her eldest, Anthony, were also so good—I love that she is able to criticize his negligence or his behavior and that he cares what his mother thinks. She is compassionate, caring, loving and warm to her children equally, and shrewd, canny, and manipulative in society.
—-
Our conversation continues in Part III, a discussion of Simon, Daphne, and their courtship.