Bridgerton: A Discussion, Part I

Please welcome my friend Layla, who is joining DA as an additional book reviewer. When we were watching Bridgerton, Layla and I texted back and forth about it. It was so much fun that we decided to write a series of posts that included our thoughts on different aspects of the show. –Janine

Janine: Let’s start with the production values. I loved that the fashions quickly signal that we are not anywhere near actual history, that this is a sexy, glamorous, delicious fantasy world, escapist and fun, and that we shouldn’t take it too seriously. We’ve got the Featheringtons’ glittery and patterned dresses, the lapels on the mothers (I include Lady Danbury as one of them) and most of all, the queen’s wigs—some of those look almost like soft-serve ice cream.

The camerawork, music, and set decoration lean into the swoon. We get lingering close-ups of Phoebe Dynevor’s and Regé-Jean Page’s faces, lantern-lit Vauxhall Gardens, and opulent ballrooms. There’s a romanticized London streetscape where the wealthy are on display—no chimney sweeps or panhandlers in sight. Like a cake frosted in thick buttercream with colored sprinkles, the show is rich, delicious, fun, even if not entirely nourishing. That’s acknowledged very clearly. If that’s not your fantasy, you’re going to tune out very soon. 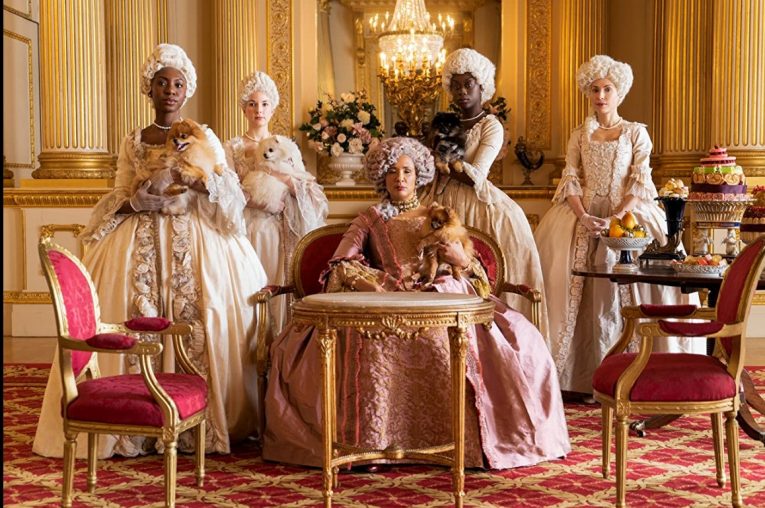 Layla: I love the language of food that you use—not only did it make me hungry for cake but it very viscerally describes the aesthetics of the show. The two things that entranced me were the clothes and the food—opulence personified. This is history—I think that’s part of the appeal—but it’s a history as you say, that is melded with fantasy and I think the clothes, the fashions, the brightness of everything, the cleanliness, the handsomeness and beauty of the actors—all of it works together.

All of the drama comes from interpersonal relationships, this is a world where personal politics take precedence over the issues of the state or government. I think that the concomitant fantasy of race that attends that works seamlessly because of it. It’s a fantasy not just about wealth, but about history. And I was living in and loving it! (even though someone like me would not historically have been a participant in that world.)

Janine: (Someone like me wouldn’t have been either.) That’s an excellent point about the absence of state or governmental issues. It creates a self-consistency that works in tandem with the production values. I usually prefer narratives that hew closer to history because it helps me to suspend my disbelief. Here I don’t feel a need to because the opulence and the close focus on relationships keeps me from focusing on what is missing.

Janine: I loved the racebent casting choices. I loved the way the show broke with the frequent (though false) expectations that everyone was white in 19th century England. It was cool, too, that the two recurring characters highest on the aristocratic title ladder—the queen and the duke—were played by black actors (the real Queen Charlotte is thought to have been part black). It made the show feel updated, a show for the twenty-first century, where popular entertainment isn’t focused on white people to the exclusion of all others. That was subversive to a point. I mean, the travails of wealthy upper-crust Europeans are still foregrounded, but the casting made these story threads fresher and more fun.

I did have a quibble. I didn’t like the way Simon’s friendship with Will Mondrich (Martins Imhangbe) played out. Will was mostly there for Simon to punch. It’s a lazy way to show that Simon was upset and it didn’t develop their relationship or Will’s character much. Toward the end we did get a bit of that but it didn’t, IMO, enrich the character.

Layla: I think the racial fantasy at the center of the show not only accounts for its success, but also is a fantastic (in every sense of the word!) innovation in both adaptation from the book, and in television production and casting. That the swoonworthy male lead of the show is a black man—I think that in and of itself is extraordinary. How many other shows with a black male lead who is the object of desire are there? Now of course, the idea of interracial desire in a colonial/imperial context is problematic—while I’m celebrating that a black man is the sexy hero, I am also acknowledging the long and fraught history of representation and objectification of black men as objects of sexual aggression and desire. 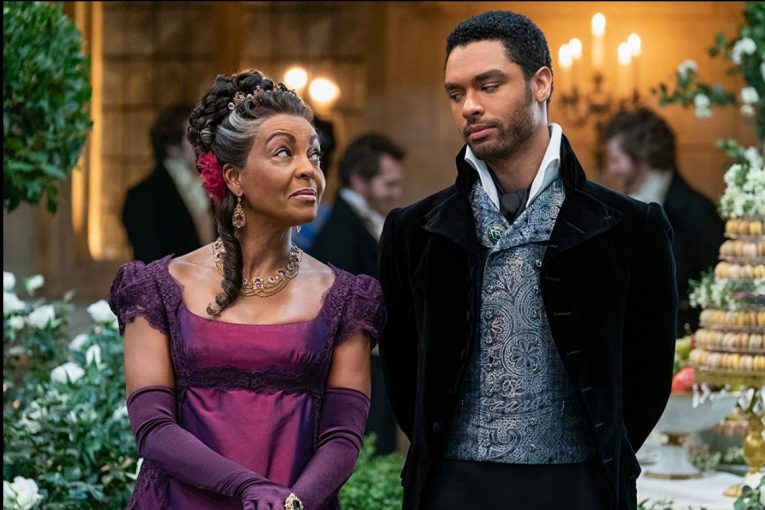 Like you, I loved the casting of Golda Rosheuvel as the Queen, and I also loved Lady Danbury (Adjoa Andoh). So it was important and good that two of the most powerful female figures in the show are black women. They are savvy and smart and beautiful and fashionable and I was all in on the fantasy! The most problematic black character for me was Marina. I loved the actress but I did wish that a black female character would have had a romance with a happy ending.

Janine: Yes! And in fact, the sad ending of Marina’s story thread made no sense. She gets a groom who is obviously honorable and willing to marry her and be a father to her child. That was what she wanted Colin for. It’s not like Colin was the love of her life. She barely knew him when she made the decision to pursue him. So at the end she gets what she wanted. This is something that should be celebrated, not mourned.

A friend of mine made the point that the show did this to punish Marina. I agree, and I didn’t feel that was deserved. Yes, she was wrong to deceive Colin, but she was in desperate straits. Her situation was dire. It was either that or marry the elderly man who only wanted her for producing offspring and nothing else. I would argue that the exposure of Marina’s lie was at least as harmful as Marina’s lie. Even if you think Marina deserved the consequences, her child’s future is at stake too. This was a time when being born out of wedlock carried a powerful stigma and a woman alone couldn’t easily support herself. So yeah, I agree with you that Marina’s characterization was troubling.

Janine: The show made excellent use of Lady Whistledown’s narration. Julie Andrews does a great job of introducing viewers who may not be readers of the genre to some of the major tenets of historical romance: the ton, the marriage market, scandal and its huge ramifications. The writers make good use of the montages invested with her voice-over narration to set the stage and frame the characters’ dilemmas.

Andrews also conveys how delicious gossip is to Lady Whistledown, how she loves to dish. There’s an edge of cynicism there; she’s wise to the ways of the ton and its peccadilloes. She verges on catty but never goes all the way there. 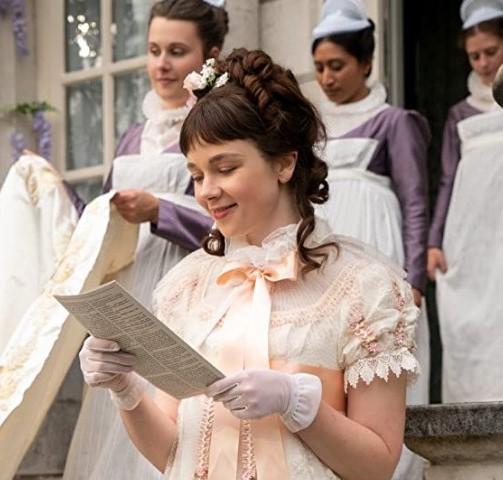 The one flaw I found with Lady Whistledown’s portrayal is that her tone isn’t a good fit for the woman secretly penning these scandal sheets. They are not at all alike in personality and it’s hard to imagine her voice as Lady Whistledown’s.

Layla: I love love love the casting of Julie Andrews whose voice is ICONIC! She is the total epitome of upper crust Englishness. She has a bit of Mary Poppins—there is something almost magical about how she knows so much! And I felt a big mystery that worked for the show was not knowing her motivation.

Eloise dislikes her at first, then comes to admire her. She’s scorned by other characters who disdain her as a malicious gossip, yet she is really the heart of the show. As an omniscient narrator she reveals things we need to know, conceals things that heighten our sense of drama and surprise, and delights us with her witty and keen observations and descriptions.

I’m interested in the question of feminism and the show and I think a key figure to think about that is Lady Whistledown, who is able to comment quite acidly about the institution of marriage, the role of women in society, and the constraints and hypocrisy attendant to certain proscribed gender roles. Final thought—this epistolary device in the novels is one of the things that sets the series apart and it works beautifully as a narrative device in the television series.

In Part II of our Bridgerton discussion, we talk about the show’s matriarchal figures–the Queen, Lady Violet, Lady Danbury, and Lady Featherington.