Warning: mysqli_query(): (22032/3141): Invalid JSON text in argument 1 to function json_contains: "Invalid value." at position 0. in /home/customer/www/dearauthor.com/public_html/wp-includes/class-wpdb.php on line 2187
 The Cross Dressing Duke by Anna Cowan
May 14, 2013

The Duke of Darlington is the hero of my debut novel Untamed. He spends most of the novel pretending to be a woman, wearing gorgeous masterpieces in embroidered silk with tight corsets and small hoops. Untamed is set in the Regency, so his fashions are a little outdated, but he knows a high-waisted dress would be difficult to pull off, and he’d rather look spectacular and outdated than silly and fashionable. 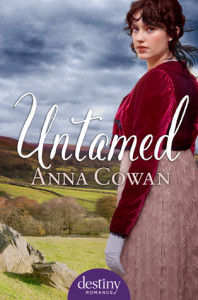 I first had the idea almost four years ago, when I was talking with a friend about our favourite romances. A cross-dressing heroine came up, and my friend started enthusing about how cross-dressing was one of her all-time favourite romance tropes. I was agreeing in a mild sort of way when my slightly twisty brain played me an image of a man – a rake, naturally – trying to fall asleep in a room with five sisters who all thought he was a woman.

I feel kind of gobsmacked when I read back over that first draft. It’s so naive and exuberant. How on earth did I think that was a romance hero? But he stayed with me, and changed and deepened and darkened, and became something I absolutely adore.

One of the reasons I’m drawn to writing in a historical period is the clear gender roles. From a distance of 200 years the roles of men and women seem fixed and restrictive, in a way I’m sure our society will also appear 200 years from now. This creates clear external conflict (the rules of society make it as difficult as possible for spontaneous romance to occur and flourish) and clear boundaries for a heroine to push against (society is more obviously sexist, so we can clearly see how a woman is restricted and acts out against restriction).

I think these are also the reasons cross-dressing heroines are popular. When a woman dresses as a man she takes on the power of a man – which, as I’ve said, is more obvious in a historical period. This allows her the agency to act outside the restrictions placed on her. It also adds a subtle glamour to her: she is now inhabiting the masculine sphere, and can become a hero.

A cross-dressing hero works very differently. He is moving from a position of power to a position of less power; he is placing restrictions on himself. And where dressing as a man adds a certain heroic quality to a woman, there is still something deeply taboo about a man dressing as a woman.

This taboo is in part why Darlington intrigues me. We know that sexual taboo is often where the greatest thrill is found. Similarly, there’s something about breaking this cultural taboo that electrifies my intellect. It turns Darlington into something complex and unpredictable. He is a man, but he is not easily described as masculine.

Hetero romance deals in ideas of feminine and masculine. There’s a line I’ve read hundreds of time, in a sex scene, that’s some variation of: He was so hard and masculine that it made her aware of her own feminine power.

A line like that doesn’t define what it means by masculine and feminine – it relies on, and reinforces, a traditional concept of gender. Which isn’t a bad thing. In fact, I think it’s part of what makes romance so emotional and emotionally satisfying to read. We’re socialised to identify with a certain gender – and a powerful version of that gender. So when we read a book that reinforces that version of gender, it can resonate deeply.

In reality, when I get ambushed by moments of feeling that sort of feminine it’s surprising and makes me feel a bit awkward and bashful and grateful. It’s an alien feeling – not something I experience myself as in a lived way. When a heroine feels “soft and feminine” it’s more foreign to me than familiar.

In Untamed I wanted to explore ideas of masculine and feminine that intrigue me, and in some ways resonate more strongly with me.

The first time I workshopped Untamed in a writing class my classmates were perturbed by the idea of a man making a beautiful woman. Many suggestions were thrown around along the lines of, “My, what hairy hands you have, my dear! My, what manly wrists!”

No, no, no. Darlington isn’t confronted by inhabiting a more feminine space. It’s not slapstick. It’s part of what makes him a powerful character to me – the way he does not need to be “masculine” to be a man. He is a person first, a man second.

The Duke gave an elegant shrug and flicked his fan open. A water scene had been painted on to the paddles with exquisite care, and the lazy motion of his wrist seemed to bring it to life. Kit had seen her brother Tom assume theatrical roles in the local, amateur productions – she’d even seen him act the woman more than once, when the number of parts required it. He always remained Tom, acting. The Duke’s transformation was absolute, down to the very marrow of his bones. There wasn’t a single hint of self-consciousness about him. His demeanour, the set of his mouth, the lazy sway of his hand, all belonged to Lady Rose. The ease with which he changed his skin was frightening.

The unanticipated effect Darlington’s ease had on Untamed was that it allowed the heroine, Katherine, to inhabit a more masculine space. She doesn’t have to masquerade as a man – she remains a woman, but is allowed, in her relationship with Darlington, to play a role most often reserved for the hero in romance.

Given this gender balance, a big part of developing Untamed was ensuring Darlington would be a desirable hero to female readers. The answer wasn’t, as one contest judge suggested, to “Make him a man most girls would fall for. Handsome, tough looking and can melt butter when he entertains the ladies and a mouth that shoots bullets when talking with a man.”

For one thing, I’m too in love with him to turn his words into bullets. He’s a fairly queer-gendered hero, and he reminds me of some of my favourite m/m romantic heroes. As the hero of a hetero romance he is queer-gendered and also explicitly allowed to be the object of female desire. This is a female desire that’s rarely reflected in romance.

She came and stood behind him, a hand-span away from him, and plucked the pins from his wig, one by one. She pulled it from his head and hung it carefully from the mirror frame. Then she pushed her hand through his thick black hair, across his scalp. It was a rough, needy touch, and his head rocked forward beneath it.

She stroked down his cheek, down his neck, and stepped into him so that his back was a hard line against her body. She curled over him and began to unhook the front of his dress; he dropped his head back against her shoulder.

On every breath that came from him, there was something uncontrolled. The hint of a moan. Something that made her own breath draw in harsh against her teeth.

But he lay quiescent in her arms. Surrendered. Vulnerable.

She pulled the dress away down his arms and let it fall over the stool, the skirts still trapped beneath him. She came to her knees, her arms around him as she untied the tapes of his hoops and petticoats, until they fell down around his hips, a profusion of material, and all that remained was his haughty form encased in a rigid corset.

She stood slowly, her lips drawing a shiver from the nape of his neck.

She ran her knuckles down the tight laces of the bodice, and her body seized with a feeling so dark that for a moment she couldn’t continue.

She looked over his shoulder into the mirror and saw his eyes blown wide with excitement and fear.

It was far, far too late for doubt.

She had already leapt off some great height with him, and could not wish for solid ground now. 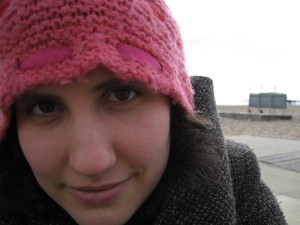 Ms. Cowan’s book is the subject of dueling review to be posted later today.  You can find Anna Cowan at her blog diary of a(n accidental) housewife and on Twitter:  @annacowan.