On the importance of pseudonymous activity

We here at Dear Author have always supported anonymity and pseudonymity. We have allowed people to use pennames and alias in the comments even when it meant they would be hurling insults at us, even when they engaged in sock puppetry (by changing their alias but posting from the same IP address).  We do this because we believe in providing a safe place to express your opinion. We don’t always carry out this philosophy perfectly. We’ve made mistakes (and will continue to do so because we’re human and imperfect).

Most of the reviewers at DA use a pseudonym as do many authors in the romance community. Some people use their full legal name and some do not. There are many reasons for using a pseudonym and most of them are valid and as Justice John Paul Stevens noted, it’s a protected right.

On Saturday, author Kathleen Hale was given a platform on the Guardian, one of the most venerable book outlets in the English speaking world. Using that platform, she chronicles a months long stalking campaign to a Goodreads reviewer who Hale charactered as her number one critic.

I’m not sure why Hale assigns the moniker of #1 critic to this particular Goodreads reviewer because Hale’s book is the subject 170 one star ratings on Goodreads.

Hale became strangely fixated on the GR reviewer and proceeds to spend months (yes months) infiltrating the GR reviewer’s online life until she is one day able to obtain the reviewer’s address. From there, Hale took her stalking offline.

“Why would a reviewer EVER use a fake name?” implored the author currently stalking the hell out of one. “I can’t think of one reason.”

This is the course of events. On January 31, 2014, Goodreads reviewer begins chronicling her reading of Hale’s book through the use of status updates. This is a behavior that Goodreads promotes and places the status updates box on the front page. It is literally the second thing on the sidebar and one of the first things on the mobile app. 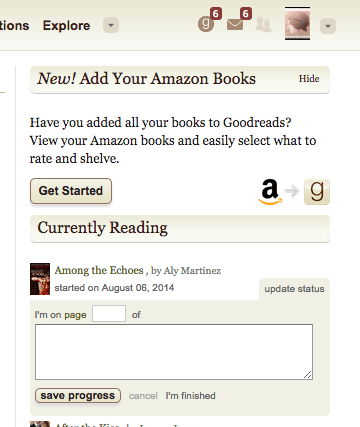 And the screenshot which Hale deleted is here: 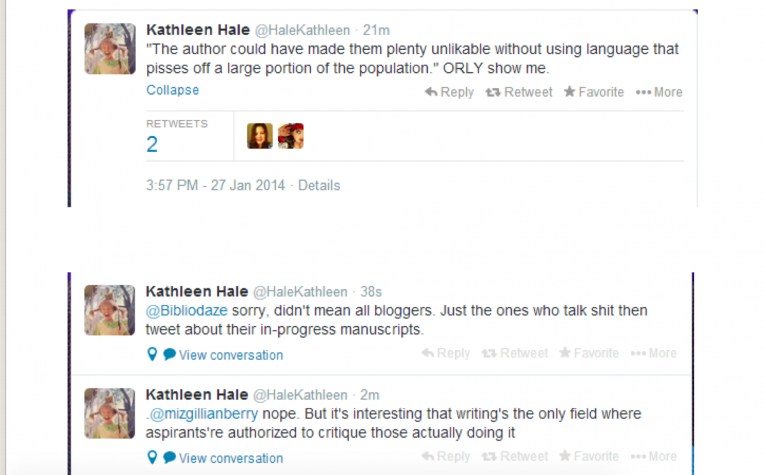 To summarize, the extent of the GR Reviewer’s actions includes:

You might assume by the response of Hale to the blogger’s actions and the nearly 5000 words devoted to this response that the blogger was engaged in really terrible behavior. Certainly commenters and twitter denizens believed the blogger was “deranged” and “no angel” and “vicious”  I read the Guardian piece carefully, probably five times, to ascertain exactly what it was that the blogger/reviewer had done and arrived at the above four actions. Let’s take a look at Hale’s actions.

My hope is that Guardian will wake up and realize that the publication of this stalking account should be deleted. That it and whomever applauds this piece understands it is enabling completely out of bounds (and likely criminal) behavior.  Sarah from Smart Bitches writes:

I don’t understand why the Guardian chose to publish that essay. I don’t understand the thought process of the editor who gave it the green light and effectively condoned the stalking and harassment of a reviewer. The fact that the Guardian published it is as disturbing and abhorrent as Hale’s actions – to say nothing of the degree to which she and the editors at the Guardian both seem to lack understanding of how inappropriate those actions were. The fear and horror and wariness that Hale’s and the Guardian’s decisions have created in many people is absolutely real and justified.

There is no question that some authors think Goodreads should be shut down and wish that there were only “professional” reviewers left to review books and that readers should be allowed to only say good things about all products. And there’s no question that this type of action by Hale will lead to some reviewers/bloggers deciding that the hobby of blogging is simply too rife with complications to continue. Possibly that is the outcome that some want.

I’m horrified that anyone thinks that what Hale did was okay. If this was for publicity, it’s even more sickening. I know that by publishing this, I’m raising the signal for Hale but it was in the Guardian so the signal is pretty damn big right now. There are very few instances wherein Hale’s behavior is justified and nothing in the twisted, one sided account by Hale articulates even one of those few instances.

The following is a storify account compiled by BookThingo of various reactions.