Both Jane and I enjoyed Gayle Forman’s previous novel, Where She Went, so we were happy to participate in the blog tour launching her latest novel, Just One Day. One of the things I loved about Just One Day was the traveling aspect and in fact, I wished there were more of it. I’m a big fan of travelogues.

On with the show.

Welcome to the Just One Day blog tour! We all know one of Gayle’s talents lies in writing the swooniest books possible, but she’s also a world traveler! Many of her experiences inspired scenes in Just One Day (and Just One Year, out next fall!). Each day along the tour there will be a new photo from Gayle’s travels, along with the story behind the photo written by Gayle! 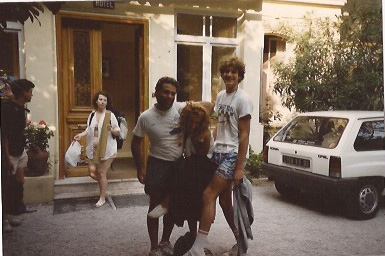 People travel for different reasons. Adventure. Expansion. Escape. Sometimes, it’s hard to distinguish one from the other.

This is a picture of Buddy (short) and Scott (tall), an American stockbroker and a Dutch solider, respectively. At least that’s what they were in 1988 and I should probably admit that I’m not 100 percent certain about their names. But I remember meeting them while traveling solo after my friend Rebecca had gone back to England to go to university. When she first left, I was scared to travel alone, but by this point I’d learned that in many ways, it was easier than traveling in a pair. You met people constantly.

So, me, Scott and Buddy met at our guesthouse in Nice and we spent almost a week together, exploring the surrounding towns of the French Riviera.

Scott was in the Dutch military, which didn’t seem quite the same serious endeavor as being in the U.S. military. In any case, he’d gone AWOL for the week to go to the beach. Buddy had been a stockbroker, a surfer, a dude from San Diego. And then his best friend had died of brain cancer and Buddy kind of dropped out of that life and was in the midst of traveling.

I suppose on one level, you could say that these guys were escaping something by traveling. I suppose you could say in that same vein that when my husband and I went traveling around the world for a year in 2002—after living through both 9/11 and what we called our personal 9/11, a devastating personal loss earlier that year—we were escaping through travel. And we were, even though we’d planned the trip long before that awful year. But escape is not synonymous with avoidance. There’s something about the immediacy of travel, about being so constantly out of your comfort zone, that puts you in a kind of heightened emotional state. Even if you want to escape, what often ends up happening is the opposite. You wind up facing up to whatever it is you are supposedly running from.

Want to see more of Gayle Forman’s amazing traveling? Penguin Teen is posting one picture a day on tumblr for a whole YEAR!