My daughter is about to start reading Anne of Green Gables. After she’s done, I told her we would watch the television miniseries. It is one of my favorite book to movie adaptions ever. The actress chosen to be Anne Shirley was everything I had ever imagined Anne would be from her carrot-y braids to her penchant for over dramatization.

So often when you see the transformation of a book into a movie there is this let down, a certain disappointment that the movie failed to capture the spirit and magic of the characters you have built up in your mind.

Books have been a ripe source of movie inspiration both in the past and more recently. I don’t have Starz but the production of Outlander has captured the attention of much of my Twitter feed and there are tumblrs devoted to the rising star Sam Heughan who plays Jamie. 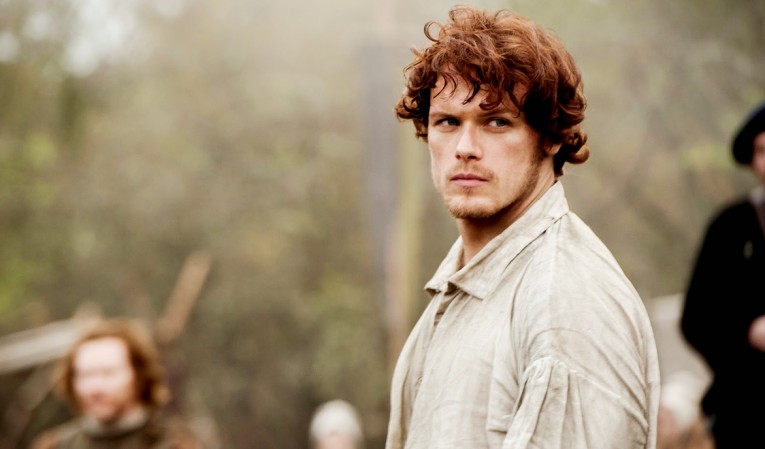 I can see why. He emotes in a picture. (I think 50 Shades should have picked him as Christian Grey rather than the Dornan character who looks like he has about as much sex appeal as a thimble)

While the whole of YA books transformed into movies haven’t done as well as the original spawn, Harry Potter, the moderate success of Divergent and the stunning success of the Jennifer Lawrence lead Hunger Games, leads me to believe that Hollywood will take more chances on YA books despite the bombs of Beautiful Creatures and Mortal Instruments.

I’ve been utterly captivated for years by the Tolkien productions of Peter Jackson and anxiously await the third and final installment of the Hobbit. But I think my appreciation for these movies has more to do with the fact that the books themselves were such a distant memory and I hadn’t loved them enough to create the characters in my own mind. Thus Jackson’s rendition was perfectly fine to adopt as my own.

Who the lead characters are is important but the story is as well. When I watched the Harry Potter movies this past year (my daughter was reading the books and then we’d watch the corresponding movie after she finished) almost none of the movies lived up to the books in part because some of the acting was poor but so was some of the on screen storytelling. The Goblet of Fire was my least favorite with the last two being my most favorite. I felt it had a lot to do with the director and the parts of the story the director choose to tell.

As a kid I remember thinking the Swiss Family Robinson movie was loads more interesting than the book because the movie had pirates. The book is just full of awful colonialism. I re-read that with my daughter a few years ago and cringed hard throughout the whole story. The whale is my favorite part in the book–that and the salt cave.

Recently the book Princess Bride was on sale and I mentioned that I loved the book. In the comments someone mentioned disliking both the book and the movie, but the movie had such charm. The casting for that movie was spot on. Cary Elwes played the perfect stableboy turned swashbuckling pirate.

As a young teen I cried buckets over The Outsiders which my brother had rented surreptitiously from the local video store. My parents would never have approved but I saw the movie first which can have a huge impact on one’s opinion of a book.

Stand by Me and Shawshank Redemption were both award winning movies adapted from short stories by Stephen King. Yes, the casting was great in both movies but I thought the actual movie making itself was gripping. I can still vividly hear Morgan Freeman narrating parts of Shawshank Redemption in my head.

The movie version of The Silence of the Lambs was incredible and it actually sent me on a Thomas Harris binge which I regret because I then read a number of mysteries and still have nightmares about the one with the blind girl, the snake and the dish of milks. *Cries*

But there are no shortage of terrible movie adaptions. The Princess Diaries is one of them. I loved those books and even with the smart casting I felt that they never really captured the adorkable charm of Mia. I love Katherine Hepburn but could barely finish the Little Woman movie. Nick and Norah’s Infinite Playlist was another movie I thought was awful. Or maybe I just don’t like Michael Cera.