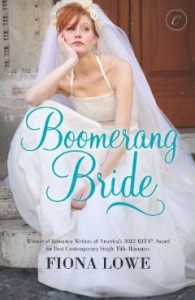 Matilda Geoffrey had risked it all for love.

She’d left Australia to be with Barry—the man who had swept her off her virtual feet. Now, wearing a wedding dress, she’s alone on Main Street in small-town Wisconsin, and things aren’t working out exactly as planned….

In town for his annual family visit, Marc Olsen had never seen a bride quite like Matilda—staring into a storefront window, holding a tottering wedding cake and looking desperately in need of a groom. He doesn’t have many warm feelings for his hometown, but meeting Matilda just as she discovers she’s been scammed by her online “fiancé” stirs something in him.

Matilda is not the kind of woman Marc imagined himself with, and Marc is anything but the romantic hero that Matilda has always dreamed of. But as unlikely circumstances throw them together, can they let go of their misconceptions and risk their hearts for love?

This was a RITA nominated book, one of the first digital first books to receive the distinction. I think that it might have even won a RITA? I can’t recall.  Sunita reviewed it at DA and gave it a B. 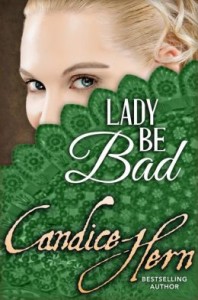 John Grayston, seventh Viscount Rochdale, has never refused a wager, especially one that involves enticing a beautiful woman into his bed. He’s willing to stake his most prized possession that there’s not a single woman in all England immune to his charms. But when the object of the wager is the prim and proper Grace Marlowe, he has to turn on the full force of his seductive charm.

Grace’s stalwart virtue is put to the test when the infamous rake shows an unexpected interest in her. Outraged, flattered, and reluctantly attracted, she soon finds herself falling under the spell of the man behind the scandalous reputation. Rochdale, in turn, is delighted to discover a fiery passion beneath the widow’s prudish façade. But when hearts and lives become tangled in the gamble, the truth of his seduction could ruin everything.

The second book in the The Merry Widows trilogy, Just One of Those Flings, is still 3.99. 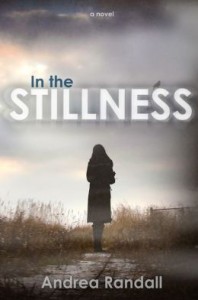 In the Stillness by Andrea Randall. $ .99

Clawing at walls built by resentment, regret, and guilt, Natalie cuts as an escape from a life she never planned.

Staying present is only possible when you let go of the past. But, what if the past won’t let go of you?

I’ve debated buying this book several times. The reviews are fairly strong BUT it’s also about someone who, unhappy with her marriage and her current husband, ends up with a former love. I’m not sure that’s a story I want to read even if it is a moving one. 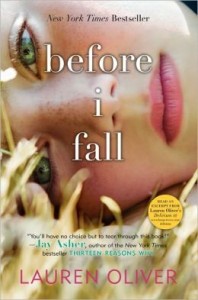 Overview
What if you had only one day to live? What would you do? Who would you kiss? And how far would you go to save your own life?

Samantha Kingston has it all: the world’s most crush-worthy boyfriend, three amazing best friends, and first pick of everything at Thomas Jefferson High, from the best table in the cafeteria to the choicest parking spot. Friday, February 12 should be just another day in her charmed life.

Instead, it turns out to be her last.

Fortunately, she gets a second chance. Seven chances, in fact. Reliving her last day during one miraculous week, she will untangle the mystery surrounding her death—and discover the true value of everything she is in danger of losing.

This is a story of redemption and transformation. School Library Journal says “It is difficult to feel pity for Sam; she is snobbish, obnoxious, a cheater, and just plain mean. However, her gradual and complete transformation is so convincing that when she finally puts others before herself in order to save another life, it is moving and cathartic. The deepening relationship between Sam and Kent, her childhood friend, is sensitively described and the most complex and compelling relationship in the story. Although somewhat predictable, the plot drives forward and teens will want to see where Sam’s choices lead.” 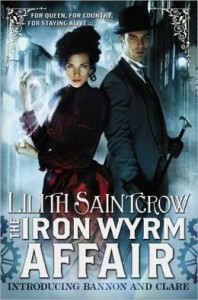 Emma Bannon, forensic sorceress in the service of the Empire, has a mission: to protect Archibald Clare, a failed, unregistered mentath. His skills of deduction are legendary, and her own sorcery is not inconsiderable. It doesn’t help much that they barely tolerate each other, or that Bannon’s Shield, Mikal, might just be a traitor himself. Or that the conspiracy killing registered mentaths and sorcerers alike will just as likely kill them as seduce them into treachery toward their Queen.

In an alternate London where illogical magic has turned the Industrial Revolution on its head, Bannon and Clare now face hostility, treason, cannon fire, black sorcery, and the problem of reliably finding hansom cabs.

The game is afoot..

Saintcrow’s an authorial voice that doesn’t work for me but she has kick ass ideas.