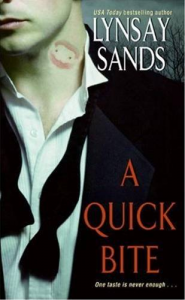 Lissianna has been spending her centuries pining for Mr. Right, not just a quick snack, and this sexy guy she finds in her bed looks like he might be a candidate. But there’s another, more pressing issue: her tendency to faint at the sight of blood … an especially annoying quirk for a vampire. Of course it doesn’t hurt that this man has a delicious-looking neck. What kind of cold-blooded vampire woman could resist a bite of that?

Dr. Gregory Hewitt recovers from the shock of waking up in a stranger’s bedroom pretty quickly — once he sees a gorgeous woman about to treat him to a wild night of passion. But is it possible for the good doctor to find true love with a vampire vixen, or will he be just a good meal? That’s a question Dr. Greg might be willing to sink his teeth into … if he can just get Lissianna to bite.

This is the first in Lynsay Sand’s The Argeneau Family vampire series. It’s a fun and irreverent look at vampire romances. The heroine the vampire in this book and the hero is a psychologist. I recall reading this a very long time ago but enjoying it. Don’t expect anything deep or meaningful. 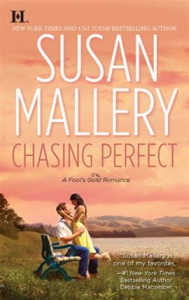 A book I’ve read! I enjoyed this book despite some of the problems. The hero is a cyclist, which I thought was different at the time. “Despite the problems I had with Charity, the story was an easy read.   Josh was charming with a somewhat simplistic story arc.   The matriarchs of Fool’s Gold were both smart and comical.   I thought for the most part the story was a very pro feminine one but I would have liked the insides of the cake to have matched the outer frosting.”

I’ll also add that I have written my share of negative reviews of Mallery’s books but she has never been anything but polite and gracious to me. A complete class act. 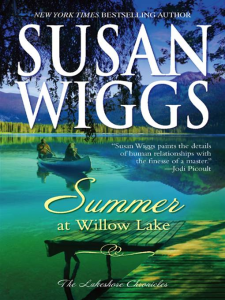 Real estate expert Olivia Bellamy reluctantly trades a trendy Manhattan summer for her family’s old resort camp in the Catskills, where her primary task will be renovating the bungalow colongy for her grandparents, who want one last summer together filled with fun, friends and family. A posh resort in its heyday, the camp is now in disarray and Olivia is forced to hire contractor Connor Davis–a still-smoldering flame from her own summers at camp.

But as the days grow warm, not even the inviting blue waters of Willow Lake can cool the passions flaring or keep shocking secrets at bay. The nostalgic joy of summers past breathes new promise into a special place and people…a promise meant to last long after the season ends.

This is the first in a series and is called a “quiet, character based romance” by Publishers Weekly. Another reviewer said that the time spent setting up all the subsequent books (Sequelbait) was distracting. 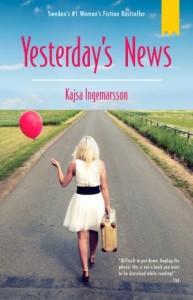 Agnes has most things in life: a job at a fancy restaurant, a boyfriend who loves her, and a best friend whom she knows inside out. Or does she? All of a sudden things begin to crumble, one by one, and soon nothing is as it was. Her boyfriend leaves her for a big busted singer, and she is fired by the sexist and abusive owner of the restaurant where she works. She gambles everything she has on the success of a newly opened restaurant, but the road to the glowing review which will open the door to fame and fortune has, to say the least, unexpected twists and turns.

In?Yesterday’s News Kajsa Ingemarsson’s?comic talent comes into its own. The book is one of the greatest bestsellers of all time in Sweden with more than 800,000 copies sold. Juicy and satisfying,?Yesterday’s News?is a story about daring and winning and about faith in yourself, a feelgood novel sure to please anyone looking for the antithesis to Stieg Larsson.

This is the Nook Daily Deal and most times Amazon matches this price. The 3 star review on Amazon called it chick lit set in Sweden. I’ve never read a Chick Lit book set in Sweden and I admit I am intrigued. From the blurb, it does sound like a chick lit book is a universal experience. I also laughed that 1 in 4 Swedish women have read this book.