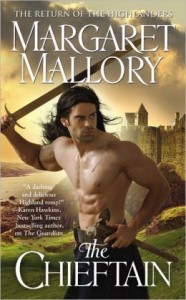 The Chieftain by Margaret Mallory. $ 3.49

Overview
Connor, chieftain of the MacDonalds of Sleat, holds the fate of his people in his hands. Rival clans are plotting to take over his lands, and duty determines whom he will fight, trust . . . even marry. Seeking guidance, Connor turns to Ilysa, a young lass with the gift of foresight, who reveals an approaching danger-and a passion that burns only for him. But the warrior must make a powerful marriage alliance, and Ilysa’s bloodline is far too humble.

With her powers to heal and see evil where others cannot, beautiful Ilysa dresses plainly, speaks softly, and loves her chieftain from afar. Yet when Connor finally stokes the embers of desire that have so long burned within her, Ilysa feels bliss unlike any she’s ever known. Now as he is forced to place duty before happiness, Ilysa senses Connor is in grave peril. Can she find a way to prove she is the woman he needs by his side?

This is a little outside our normal $2.99 and under deal price but Margaret Mallory alerted me to these deals which I really appreciate and the price was close enough. Mallory is known for her attention to historical detail. PW writes “Readers will appreciate the well-developed romance, historic detail, and red-hot passion as they root for two strong protagonists who bravely face danger at every turn.”

Kobo has this listed in the Romance Erotica section. 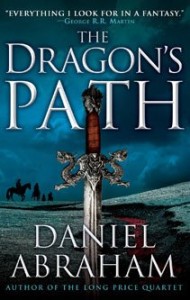 “Everything I look for in a fantasy.” – George R. R. Martin

Falling pebbles can start a landslide. A spat between the Free Cities and the Severed Throne is spiraling out of control. A new player rises from the depths of history, fanning the flames that will sweep the entire region onto The Dragon’s Path-the path to war.

This e-book edition of THE DRAGON’S PATH includes a copy of LEVIATHAN WAKES. That’s two books for $2.99!

Joel on Goodreads says “The Dragon’s Path has famously (well, internet famously… actually, internet genre blog famously) been called the author’s attempt to tackle “traditional” fantasy after the LPQ, which apparently confounded the legion of fantasy readers out there who are ironically unable to imagine a fantasy world that isn’t set in a quasi-medieval Europe and doesn’t have knights and quests and swords and dragons. So here you go, masses: a fantasy book that with a quasi-European setting. It even has a sword on the cover and the word “dragon” in the freaking title!” 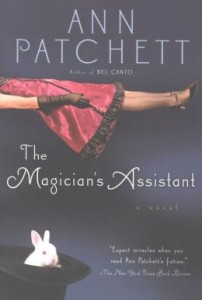 The Magician’s Assistant by Ann Patchett. $ 2.99

Sabine– twenty years a magician’s assistant to her handsome, charming husband– is suddenly a widow. In the wake of his death, she finds he has left a final trick; a false identity and a family allegedly lost in a tragic accident but now revealed as very much alive and well. Named as heirs in his will, they enter Sabine’s life and set her on an adventure of unraveling his secrets, from sunny Los Angeles to the windswept plains of Nebraska, that will work its own sort of magic on her.

After months of doing these deals, I’m convinced that women’s fiction is all about discovering your husband lied to you and then figuring out what to do about it. Talk about a formula! Newsweek says ” Patchett’s third novel is something of a magic trick itself — a 90s love story wrought with the same grace and classic charm of a 19th-century novel…We read Patchett’s novel with the same pleasure and awe of an audience watching a chained Houdini escape from an underwater chamber. “ 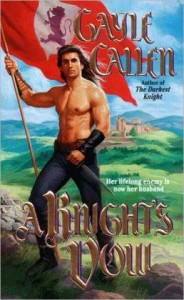 He was her father’s enemy, and now he was her husband by the king’s decree. But that didn’t mean Lady Isabel Atherstone planned on honoring James Markham, Earl of Bolton, with her love. She only hoped that her hasty marriage would bring her closer to the revenge she sought adn finally restore her family’s name. But then, the willful new bride hadn’t counted on what would happen when her handsome husband took her to the marriage bed.

James Markham was thunderstruck. Though an age-old family rivalry kept his new wife at arms against him, she quivered with desire beneath his touch. Now the newly married earl wondered if his passion would be his undoing. For though the lady swore she’d never love him, her eyes told another tale—one that made the earl vow to possess her completely.

In an effort to highlight non Regency romances, I’m including this deal for a medieval set in 1486. Kind of a standard enemies to lovers plot. The somewhat difficult to comprehend review at BN points out that the willful new bride is a bit of a tomboy and she doesn’t brush her hair like normal girls do and bathes in the river. (Cue scene with the hero inadvertently watching her?)