Daily Deals: Unusual historical, a ring of thieves, and a Jackie Robinson autobiography 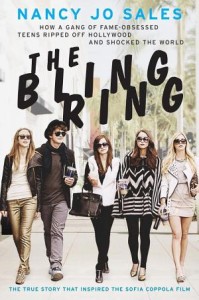 The true story that inspired the Sofia Coppola film

Paris Hilton, Lindsay Lohan, Orlando Bloom, Rachel Bilson: robbed. More than $3 million in stolen clothing, jewelry, shoes, and handbags reported missing. Who is behind one of the most brazen string of crimes in recent Hollywood history?Meet the Bling Ring: a band of club-hopping teenagers from the Valley with everything to lose.

Over the course of a year, the members of the now infamous Bling Ring allegedly burglarized some of
the biggest names in young Hollywood. Driven by celebrity worship, vanity, and the desire to look and dress like the rich and famous, these seven teenagers made headlines for using Google maps, Facebook, and TMZ to track the comings and goings of their targets. Many of the houses were unlocked. Alarms disabled. A “perfect” crime—celebrities already had so much, why shouldn’t the Bling Ring take their share?

As the unprecedented case unfolded in the news, the world asked: How did our obsession with celebrities get so out of hand? Why would a group of teens lebrity worship, vanity, and the desire to look and dress like the rich and famous, these seven teenagers made headlines for using Google maps, Facebook, and TMZ to track the comings and goings of their targets. Many of the houses were unlocked. Alarms disabled. A “perfect” crime—celebrities already had so much, why shouldn’t the Bling Ring take their share?

As the unprecedented case unfolded in the news, the world asked: How did our obsession with celebrities get so out of hand? Why would a group of teens who already had so much, take such a risk?

Acclaimed Vanity Fair writer Nancy Jo Sales found the answer: they did it because each stolen T-shirt or watch brought them closer to living the Hollywood dream . . . and because it was terrifyingly easy. For the Bling Ring the motivation was something deeper than money—they were compelled by a compulsion to be famous. Gaining unprecedented access to the group of teens, Sales traces the crimes minute by minute and details the key players’ stories in a shocking look at the seedy, and troubling, world of the real young Hollywood.

This is a movie that I don’t think has gotten really good reviews or press but I didn’t realize it was based on a true story. 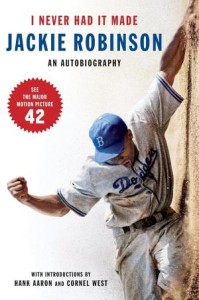 Before Barry Bonds, before Reggie Jackson, before Hank Aaron, baseball’s stars had one undeniable trait in common: they were all white. In 1947, Jackie Robinson broke that barrier, striking a crucial blow for racial equality and changing the world of sports forever. I Never Had It Made is Robinson’s own candid, hard-hitting account of what it took to become the first black man in history to play in the major leagues.

I Never Had It Made recalls Robinson’s early years and influences: his time at UCLA, where he became the school’s first four-letter athlete; his army stint during World War II, when he challenged Jim Crow laws and narrowly escaped court martial; his years of frustration, on and off the field, with the Negro Leagues; and finally that fateful day when Branch Rickey of the Brooklyn Dodgers proposed what became known as the “Noble Experiment”—Robinson would step up to bat to integrate and revolutionize baseball.

More than a baseball story, I Never Had It Made also reveals the highs and lows of Robinson’s life after baseball. He recounts his political aspirations and civil rights activism; his friendships with Martin Luther King, Jr., Malcolm X, William Buckley, Jr., and Nelson Rockefeller; and his troubled relationship with his son, Jackie, Jr.

Originally published the year Robinson died, I Never Had It Made endures as an inspiring story of a man whose heroism extended well beyond the playing field.

I’m going to buy this book because while I’ve seen many a documentary on Jackie Robinson, I’ve never read his autobiography and we all know the book is better than the movie, right? 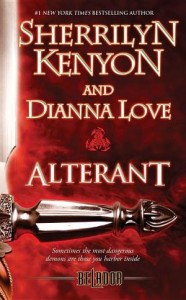 The way Evalle Kincaid sees it, saving mankind from total destruction should have cleared her name. But when words uttered in the heat of combat are twisted against her, she’s blamed for the prison break of three dangerous Alterants. She has one chance to clear the cloud of suspicion hanging over her . . . for good. All she has to do is recapture the escapees. But deals with gods and goddesses are tricky at best, and now the lives of all Beladors, and the safety of innocent humans, rides on Evalle’s success. The only person she can ask for help wants to see her dead.

At Amazon and Google Play, the three Belador books are on sale for $3.79. The books, in order, are as follows: 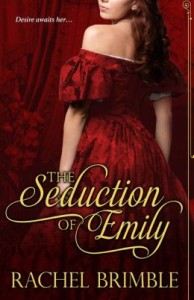 Seduction is a wicked game, and no one plays it better than the devilish Will Samson in Rachel Brimble’s captivating new novel…

Since girlhood, Emily Darson has accepted that she will marry Nicholas, the son of her father’s trusted business partner. The marriage contract safeguards her family legacy, Emily’s fortune, and everything she values—except her independence. Only when a sinfully handsome scoundrel enters her life does Emily realize quite how much a loveless match will cost her.

Will Samson has advanced from expert pickpocket to confidence trickster of the highest caliber. Now he has come to Bath to exact vengeance on the man who destroyed his mother—the man Emily will soon marry. But from his first glimpse of the enemy’s bewitching, spirited fiancée, Will’s plan changes.

Amid the ballrooms and salons of elegant society, heated glances explode into scandalous kisses. Revenge is sweet, but surrender will be irresistible…

This book sounds intriguing. Neither character is from the aristocracy. There is an impossible conflict in the form of Will wanting to enact revenge on the man to whom Emily is bound to marry by an iron clad contract. Breaking the contract would result in forfeiting her father’s half of the successful tobacco business. This three star review on goodreads was very helpful in identifying things in the book that are appealing and that might also be a deterrence.