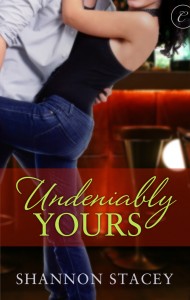 Undeniably Yours by Shannon Stacey. $2.99.

Bar owner Kevin Kowalski is used to women throwing their phone numbers at him, but lately he’s more interested in finding a woman to settle down with. A woman like Beth Hansen. If only their first meeting hadn’t gone so badly…

Beth’s tending bar at a wedding when she comes face-to-face with a tuxedo-clad man she never thought she’d see again. She tries to keep her distance from Kevin but, by last call, she can’t say no to his too-blue eyes or the invitation back to his room. Then she slips out before breakfast without leaving a note and, despite their precautions, pregnant.

Kevin quickly warms to the idea of being a dad and to seeing where things go with Beth. After all, he’s not the player she thinks he is. But she’s not ready for a relationship and, given his reputation, it’s going to take a lot to convince her to go on a second date with the father of her child…

This is definitely not my favorite Kowalski book but if you want to get a sense of what Stacey’s Kowalski series is like, this is an attractive price point entry into the series. I’d compare Stacey to Jill Shalvis or Julie James. The $2.99 price point is currently only at BN.com but I did report it to Amazon. Over at Amazon Exclusively Yours (The Kowalskis) is $1.99 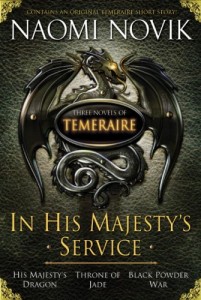 Together in one volume, here are the first three novels in Naomi Novik’s New York Times bestselling Temeraire series, combining the gripping history of the Napoleonic era, the thrill of Anne McCaffrey’s Dragonriders of Pern books, and the excitement of Patrick O’Brian’s seafaring adventures. In His Majesty’s Service also includes an exclusive original Temeraire short story.

Capt. Will Laurence is serving with honor in the British Navy when his ship captures a French frigate harboring most a unusual cargo–an incalculably valuable dragon egg. When the egg hatches, Laurence unexpectedly becomes the master of the young dragon Temeraire and finds himself on an extraordinary journey that will shatter his orderly, respectable life and alter the course of his nation’s history.

Thrust into England’s Aerial Corps, Laurence and Temeraire undergo rigorous training while staving off French forces intent on breaching British soil. But the pair has more than France to contend with when China learns that an imperial dragon intended for Napoleon–Temeraire himself– has fallen into British hands. The emperor summons the new pilot and his dragon to the Far East, a long voyage fraught with peril and intrigue. From England’s shores to China’s palaces, from the Silk Road’s outer limits to the embattled borders of Prussia and Poland, Laurence and Temeraire must defend their partnership and their country from powerful adversaries around the globe. But can they succeed against the massed forces of Bonaparte’s implacable army?

Three novels for $9.99. These are three great novels.  Jayne’s reviewed most of the series here. Even I, a hardcore romance lover, read and enjoyed these books. Definitely recommend. 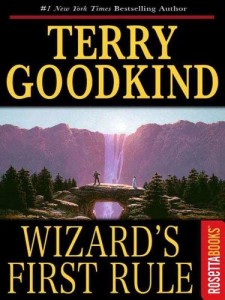 It is now being developed as one of the most ambitious television miniseries of all time. Executive Producer Sam Raimi (director of the three Spider-Man movies), in collaboration with Disney/ABC, is creating a 22-episode adaptation of the book to be filmed in New Zealand.

Richard and Kahlan’s story unfolds over ten more novels, collectively known as the Sword of Truth series, concluding with Confessor in 2007. Placing Goodkind in the elite club of #1 New York Times bestselling authors, the series has sold more than twenty million copies to date worldwide.

In Wizard’s First Rule, Goodkind introduced the world to an ordinary forest guide, Richard Cypher, and the mysterious, powerful woman he comes to love, Kahlan Amnell. Learning his true identity, Richard accepts his destiny as the one man who can stop the bloodthirsty tyrant Darken Rahl. Hunted relentlessly, betrayed and alone, Kahlan calls upon Richard to reach beyond his sword and invoke something more noble within himself as the final confrontation with Darken Rahl looms.

The importance of Wizard’s First Rule is sourced in Goodkind taking on the toughest of all literary challenges: to tell an electrifying story of action, violence, and adventure that also makes people think, and that would influence the choices and actions of its readers.

Years after reading Wizard’s First Rule, Goodkind fans still ask themselves, “What would Richard do?” when confronted with life’s obstacles and challenges. “Your life is yours alone,” Richard says at a key moment. “Rise up and live it.”

The audio version is $1.99 from Audible and features the WhisperSync for audio. 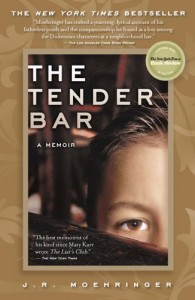 A moving, vividly told memoir full of heart, drama, and exquisite comic timing, about a boy striving to become a man, and his romance with a bar. J .R. Moehringer grew up listening for a voice: It was the sound of his missing father, a disc jockey who disappeared before J.R. spoke his first words. As a boy, J.R. would press his ear to a clock radio, straining to hear in that resonant voice the secrets of masculinity, and the keys to his own identity. J.R.’s mother was his world, his anchor, but he needed something else, something more, something he couldn’t name. So he turned to the bar on the corner, a grand old New York saloon that was a sanctuary for all types of men-cops and poets, actors and lawyers, gamblers and stumblebums. The flamboyant characters along the bar-including J.R.’s Uncle Charlie, a Humphrey Bogart look-alike; Colt, a Yogi Bear sound-alike; Joey D, a soft-hearted brawler; and Cager, a war hero who raised handicapping horses to an art-taught J.R., tended him, and provided a kind of fatherhood by committee. When the time came for J.R. to leave home, the bar became a way station-from his entrance to Yale, where he floundered as a scholarship student way out of his element; to his introduction to tragic romance with a woman way out of his league; to his stint as a copy boy at the New York Times, where he was a faulty cog in a vast machine way out of his control. Through it all, the bar offered shelter from failure, from rejection, and eventually from reality-until at last the bar turned J.R. away. Riveting, moving, and achingly funny, The Tender Bar is at once an evocative portrait of one boy’s struggle to become a man, and a touching depiction of how some men remain lost boys.

This came up on an Amazon forum and the poster said s/he picked it up after hearing an NPR Fresh Air segment about the author and the book. The negative reviews found the book too self indulgent and a little unbelievable.