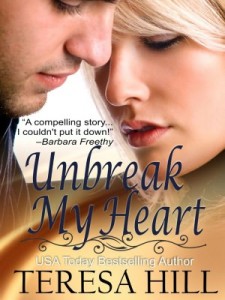 Allie Bennett’s heart is broken. Fifteen years ago, she and her mother abandoned the only home she’d ever known, leaving behind Allie’s loving father and the painful reminders of her sister’s unexplained death. But eventually, everyone has to stop running.

Years later, while cleaning out her recently-deceased mother’s things, Allie finds an anonymous letter that raises new questions about her sister’s fate. Determined to finally have the truth, Allie returns to the only place left to find answers: her hometown in the famed bluegrass region of Kentucky.

Memories haunt her there. It seems the whole town is keeping secrets from her. Especially Stephen Whittaker, a sexy, charismatic man from her past. Stephen swears he wants to help Allie solve the mysteries locked in her childhood, but is proving to be a dangerous mystery himself.

Will Stephen break her heart all over again? Or will he be the one who finally heals it?

This was originally published by Onyx (aka Signet) in 2001. The author has republished a digital version of the work. One of the 2011 reviews was by Harriet Klausner. She has been around forever! The negative review says that the work is sappy. Klausner says it is a poignant family drama. You can decide for yourself. 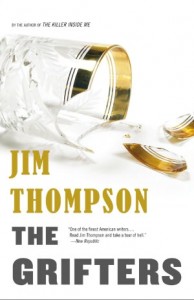 To his friends, to his coworkers, and even to his mistress Moira, Roy Dillon is an honest hardworking salesman. He lives in a cheap hotel just within his pay bracket. He goes to work every day. He has hundreds of friends and associates who could attest to his good character.

Yet, hidden behind three gaudy clown paintings in Roy’s pallid hotel room, sits fifty-two thousand dollars–the money Roy makes from his short cons, his “grifting.” For years, Roy has effortlessly maintained control over his house-of-cards life–until the simplest con goes wrong, and he finds himself critically injured and at the mercy of the most dangerous woman he ever met: his own mother.

THE GRIFTERS, one of the best novels ever written about the art of the con, is an ingeniously crafted story of deception and betrayal that was the basis for Stephen Frears’ and Martin Scorsese’s critically-acclaimed film of the same name.

I only watched the movie with John Cusack but I loved it. Of course, it could have been that I loved John Cusack. I think I should read the book because as Westley, an Amazon reviewer notes, “His mother is Lilly Dillon [is] … one of the most ferocious women ever created for fiction” 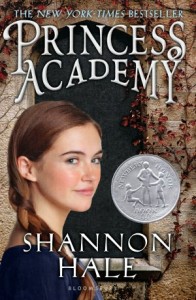 The Princess Academy by Shannon Hale. $1.99.

Miri lives on a mountain where, for generations, her ancestors have quarried stone and lived a simple life. Then word comes that the king’s priests have divined her small village the home of the future princess. Sent to an academy to learn how to become a princess, Miri soon finds herself confronted with a harsh mistress, bitter competition among the girls, and even bandits intent on kidnapping the future princess.

I’ve bought a number of Hale books because they are girl positive and by that I mean that they show the girls being proactive and doing things other than sewing shirts for her swan brothers only to be met with failure at the end or pining for her prince to come. It was the winner of the 2006 Newbery Award. 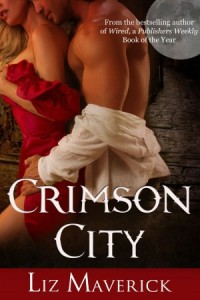 Crimson City kicks off a paranormal romance series featuring a city full of vampires, humans, werewolves, demons and mechs. In this world of hot heroes and bad-ass heroines, desire meets danger when human cop Dain tangles with gorgeous vampire Fleur. With paranormal romance, unique world-building, a big ensemble cast and a dynamite love story, Crimson City’s got it all.

“You wouldn’t be here if you were,” Fleur answered, her voice thick with emotion. “Neither would I.” Her eyes shone an intense blue that seemed to penetrate his soul. Dain imagined he saw love in their depth, but he didn’t dare ask. Not yet. Because he couldn’t be sure of what was to come. And because he had enough emotion for both of them tonight.

“No more warnings,” she barely had time to say. He pushed her down on the bed.

Crimson City series was one of the first titles published through Dorchester’s speculative fiction/fantasy/romance line. It was intended to fill that gap in the genre for the readers who wanted a blend of fantasy and romance but were tired of the traditional vampire stories. The rights to these books have reverted to the authors and the authors have republished them. I’ll be featuring the titles of the series this week.

The price is $3.99 at Amazon and $4.99 at Barnes and Noble. The price is a bit high for a deal and for a self published digital backlist re-release, but it is book 1 and I have to start with book 1 or the world will implode.