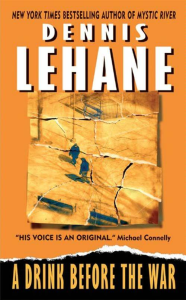 As richly complex and brutal as the terrain it depicts, here is the mesmerizing, darkly original novel that heralded the arrival of Dennis Lehane, the master of the new noir — and introduced Patrick Kenzie and Angela Gennaro, his smart and tough private investigators weaned on the blue-collar streets of Dorchester.

A cabal of powerful Boston politicians is willing to pay Kenzie and Gennaro big money for a seemingly small job: to find the missing cleaning woman who stole some secret documents. As Kenzie and Gennaro learn, however, this crime is no ordinary theft. It’s about justice. About right and wrong. But in Boston, finding the truth isn’t just a dirty business … it’s deadly.

This is the first in the Kenzi & Gennaro series of crime noir stories. If you like Lehane or crime noir, you’ll probably enjoy this. 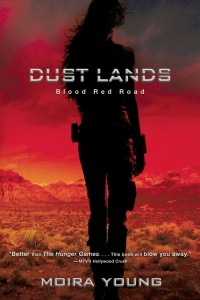 Saba has spent her whole life in Silverlake, a dried-up wasteland ravaged by constant sandstorms. The Wrecker civilization has long been destroyed, leaving only landfills for Saba and her family to scavenge from. That’s fine by her, as long as her beloved twin brother Lugh is around. But when a monster sandstorm arrives, along with four cloaked horsemen, Saba’s world is shattered. Lugh is captured, and Saba embarks on an epic quest to get him back.

Suddenly thrown into the lawless, ugly reality of the world outside of desolate Silverlake, Saba is lost without Lugh to guide her. So perhaps the most surprising thing of all is what Saba learns about herself: she’s a fierce fighter, an unbeatable survivor, and a cunning opponent. And she has the power to take down a corrupt society from the inside. Teamed up with a handsome daredevil named Jack and a gang of girl revolutionaries called the Free Hawks, Saba stages a showdown that will change the course of her own civilization.

Blood Red Road has a searing pace, a poetically minimal writing style, violent action, and an epic love story. Moira Young is one of the most promising and startling new voices in teen fiction.

This is the Young’s debut book and it was immediately optioned by Ridley Scott. Compared to the Hunger Games, Saba appears to be the antithesis of the longsuffering Katniss. However, I strongly recommend you read an excerpt because the narrative voice is quite different than anything you may have read before. 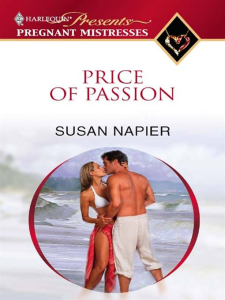 Lesson number one: the price of loving Drake was not to love him.

Lesson number two: never give him what he expected.

Discovering she was pregnant certainly fulfilled lesson number two. Drake had made it clear commitment and children were not on his menu. Now Kate must break her news. But when she sees Drake, passion kicks in, begging to be indulged again…

Reviewed by Robin aka Janet here and said the book was “an entertaining and smart interpretation of the enduring Harlequin Presents equation of plucky but overset heroine + darkly passionate and misunderstood hero = operatic drama and fiery loving. I loved every overwrought page of it.” 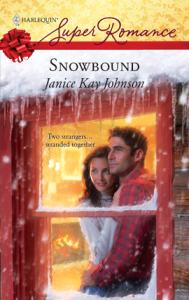 When a blizzard strands Fiona MacPherson and her students in Oregon’s Cascade Mountains, their only hope of survival is to seek shelter at Thunder Mountain Lodge. Their host is John Fallon, a handsome, enigmatic war veteran haunted by secrets and scars that may never heal.

John Fallon never imagined he’d be playing host to this captivating teacher and her eight teenage charges. But when his solitude is shattered by their arrival, his world shifts on its axis. He needs Fiona-but does she need him? There’s only one way to find out. The ex-soldier must find the courage to reach out to the remarkable woman who has transformed his life….

Wendy, the Superlibrarian, really loves JKJ. From her review here: The first half of this story is pleasant. John and Fiona are immediately attracted to each other and the teenagers provide angst and drama to keep the plot moving along. It’s nice, but nothing to get excited about. Where Snowbound really shines is after the blizzard is over and the Knowledge Champ team leaves the lodge. Fiona and John are left trying to feel their way around their budding attraction, communicating via e-mail, and even seeing each other over the holidays. What is left for conflict is John’s memories of Iraq and his unwillingness/inability to communicate them to Fiona. These are very emotional chapters, and when John finally reveals his feelings of guilt to Fiona it’s heartbreaking stuff. I found this story very topical, and wouldn’t be surprised in the least if the author either 1) knows an Iraq veteran or 2) talked to some. There’s a lot about this aspect of the story that rang true to my ears.