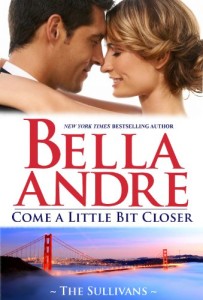 Over a million books sold in Bella Andre’s New York Times bestselling series! Fall in love with The Sullivans…

In COME A LITTLE BIT CLOSER, movie star Smith Sullivan can’t afford any distractions. He’s staking his entire reputation on his new film…but he can’t stop thinking about Valentina Landon and the fire he sees smoldering just beneath the surface.

Valentina isn’t averse to sensual pleasure, or even to the idea of finding true love, but as a Hollywood business manager she’s watched too many smart women fall for actors…only to be torn apart when the fairytale comes to its inevitable end.

But when intense weeks together on set turn their heated attraction into red-hot flames of passion, Smith knows he has to find a way to convince Valentina to let him get a little bit closer. Close enough to completely steal her heart…the way she’s stolen his from the start.

Author’s Note: While COME A LITTLE BIT CLOSER can easily be read as a stand-alone story, you’ll likely enjoy reading the earlier Sullivan books, too.

This is the latest Sullivan release. They used to sell at $4.99 but it seems like they’ve all been discounted at one time or another. 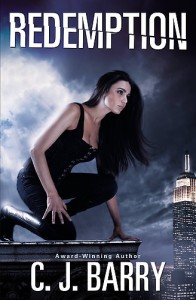 Reya Sinclair is the last person a man sees before he dies. As a Redeemer, she offers the soon-to-be-departed one last chance to atone for their sins. It’s a painful job, but it’s her only shot to secure her own salvation. She won’t let anyone stand in her way-not even a ruggedly sexy cop hot on her trail. Bound by her duty, Reya must shake him before he ruins her . . . but her heart can’t seem to let him go.

Detective Thane Driscoll has watched too many criminals get away. The man who murdered his father was no exception. Now Thane carries out his own brand of justice, even if it means compromising his soul. When a string of deaths leads him to a beautiful woman in black, he discovers there’s more to his father’s murder than meets the eye.

As fate brings them closer together, Thane discovers that only Reya’s touch can calm his rage. Racing to uncover an evil plot, they must fight together to stop the coming storm. But when the time comes, can Reya sacrifice her own redemption to save Thane?

I don’t know if I listed this before but there is a sale on PNR books but its more like a sale on PNR short stories and novellas and this is an actual book. Yay! 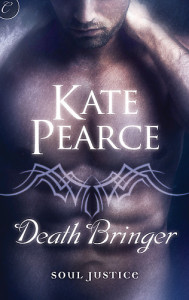 Book two of Soul Justice
A powerful magic user is stealing people’s faces in San Francisco, and empath Ella Walsh and shifter Vadim Morosov have been called in to investigate. Still adjusting to the closeness and permanence of their new relationship, the government-paired mates are soon hot on the trail of an Otherworld cultist from Vadim’s past.

But their target turns the tables, and after he gives Ella someone else’s face, the couple will have to follow him to Otherworld to get hers back. There, in an ancient world of family ties, old grudges and monsters, where living memory stretches centuries, Ella will have to confront the dangerous truth of Vadim’s bygone life.

Because there’s a reason the Fae call him Death Bringer, and if Ella can’t unravel it, she may never see her mate—or her face—again.

I’m intrigued by this but obviously you need to start with “Soul Sucker”. Melindeeloo on Goodreads says that she likes the second book in the series and that it’s a bit spicier than the first. Bonus, mysterious questions raised in the first book get answered in this one. Even better, this is a new release (Oct 21 is the release date) 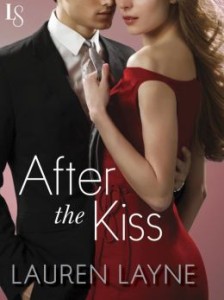 In the first book of a delightful new series from Lauren Layne, the star columnist of Stiletto magazine will do anything for a story. Anything . . . except fall in love.

Julie Greene loves flings. Loves steamy first dates, sizzling first kisses, and every now and then, that first sexy romp between the sheets. Comfy pants, sleepy Sundays, movie nights on the couch? Shudder. But when Julie gets assigned the hardest story of her career—a first-person account of that magical shift between dating and “I do”—she’ll need a man brave enough to give a total commitment-phobe a chance at more.

Normally, Mitchell Forbes would be exactly that man. A devastatingly hot workaholic who tends to stay in relationships for far too long, he should be the perfect subject for Julie’s “research.” But what Julie doesn’t know is that Mitchell is looking to cut loose for once in his life. And the leggy journalist notorious for avoiding love is exactly the type of no-strings fling he’s looking for. In other words, Mitchell is the polar opposite of what Julie needs right now. And, at the same time, he’s exactly what she wants.

I have this book and I’ve heard good things about it but it’s in my to be read pile of doom. Someone tell me if I should move it up.