Daily Deals: The Sheikh’s Heir by Sharon Kendrick and other Santina Crown books 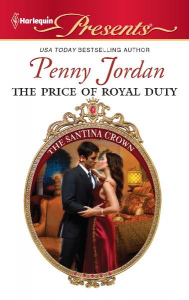 Harlequin has priced the individual books of the Santina Crown series at $2.99. We had a guest post from the authors and editor of the Notorious Wolfe series about the making of a connected mini series at Harlequin.

Santina’s rebellious princess Sophia made a shock exit from her brother’s engagement party last night following the surprise announcement of her own arranged marriage. It seems Sophia did not favor the match…instead boldly stowing away on the magnificent Maharaja of Naipur’s private jet!

Staff insiders to the charismatic maharaja, Ashok Achari, aren’t denying the pair spent a wild night together before being caught on film on arrival in Mumbai.…

Scandal is the last thing the Santina royals need right now—might this maharaja be persuaded into taking Santina’s runaway princess as his wife? 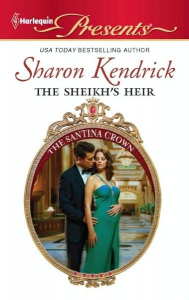 I think this is book 2 in the series, but who would know since Harlequin isn’t numbering them on the cover or in the metadata.

What happened in private is anybody’s guess. But a palace insider confirmed that Miss Jackson was seen leaving the Sheikh’s opulent suite the morning after the party.…

Could this Cinder-Ella beat her sister to a royal title…and a royal heir?

It’s book 3 of the Santina Crown series. I believe.

Santina’s Princess Natalia has been spotted on the arm of billionaire Ben Jackson, famous for his ruthless work ethic, devastating good looks and disdain for the spotlight. But Ben has no chance of avoiding the cameras with notorious party girl Natalia in tow!

Most surprising of all, Natalia has been seen putting in a full day’s work in Ben’s office! Has the legendary socialite swapped couture and cocktails for photocopying?

One thing’s for sure—if we could all have a brooding, dynamic boss like the devilishly attractive Ben, work would be a whole lot more exciting.… 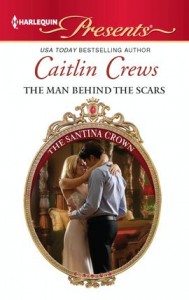 This didn’t work for me as I reviewed it here but at $2.99 you can try it out and make your own decision.

Rafe McFarland, eighth Earl of Pembroke–and twenty-first-century heartthrob–has secretly wed former model and tabloid darling Angel Tilson! Angel has long been believed to be in financial difficulty, prompting feverish speculation that her marriage to the tortured billionaire is one of the strictest convenience….

Bearing terrible scars from his time in the military, Rafe rarely leaves his remote Scottish estate. And with the terms of this deal negotiated, possibly behind tightly closed bedroom doors, is Rafe demanding repayment–in kind–from his new wife…?