These are deals good at both Amazon and Sony. You can check the whole Sony list out here. 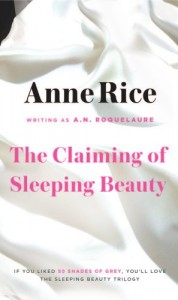 Before E.L. James’ Fifty Shades of Grey, there was Anne Rice’s New York Times best seller The Claiming of Sleeping Beauty In the traditional folktale of “Sleeping Beauty,” the spell cast upon the lovely young princess and everyone in her castle can only be broken by the kiss of a Prince. It is an ancient story, one that originally emerged from and still deeply disturbs the mind’s unconscious. In the first book of the trilogy, Anne Rice, writing as A.N. Roquelaure, retells the Beauty story and probes the unspoken implications of this lush, suggestive tale by exploring its undeniable connection to sexual desire. Here the Prince awakens Beauty, not with a kiss, but with sexual initiation. His reward for ending the hundred years of enchantment is Beauty’s complete and total enslavement to him . . . as Anne Rice explores the world of erotic yearning and fantasy in a classic that becomes, with her skillful pen, a compelling experience. Readers of Fifty Shades of Grey will indulge in Rice’s deft storytelling and imaginative eroticism, a sure-to-be classic for years to come. 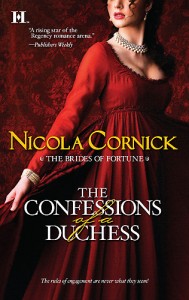 The Confessions of a Duchess by Nicola Cornick. $1.00.

When an ancient tax law is invoked requiring all unmarried ladies to either wed or surrender half their wealth, it’s not long before the quiet village of Fortune’s Folly is overrun by a swarm of fortune-hunting bachelors. Marry again? Never! Not after what Laura, the dowager duchess, was forced to endure. Even if the arrival of her onetime paramour, Dexter Anstruther, is oh-so-tempting, she knows the secret she’s kept from him would destroy any chance at a future together. Young, handsome and scandalously enticing, Dexter suspects Laura has a hidden motive for resisting his charms…and he intends to expose her, by any means necessary.

I’ve been told that Cornick is a thinking woman’s historical romance writer so yeah, I bought this one. 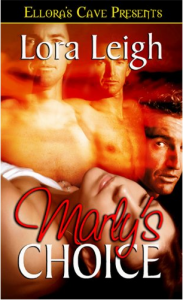 Book 1 in the series Men of AugustMarly’s love for Cade has spanned her teenage years, and survived strong and intact into womanhood. Her fantasies and daydreams have sustained her, but she’s no longer content with merely imagining the touch of his hands, the taste of his kiss. It’s time to seduce the tough, sexy cowboy.She’s heard the rumors for years, the tales of his sexual preferences. She’s prepared herself to accept his desires. Prepared her body for his touch. But she wasn’t prepared for the choice to come… Cade’s dark desires, his sexual excesses are based in the past. In a time when pain, shame, and blood stains his very soul. He carries a secret shared only with his brothers. A secret that has scarred the bond, the ability to be a brother or to accept the love of the men he was raised with. He knows the only way to prove his loyalty, his love for those brothers and Marly will be the key. She has a choice. She can surrender to Cade’s needs, his soul deep desires, or she can walk away. A choice only Marly can make. A choice that will change her life forever.

When I first read this book, I was a newbie erotic romance reader and I admit to being shocked by the content of this book. Now when I look back, I just kind of laugh at the ridiculousness of it. Part of what makes this series a classic, in my opinion, is that it totally disregards the nominal conventions of the past to disguise forbidden tropes that were written into Harlequin Presents books and others. This is a true brother lovin’ book and reads, at times, like the wild justifications of an abuser. But Leigh and Ellora’s Cave started something with these series and I don’t know that it has been successfully replicated since then. 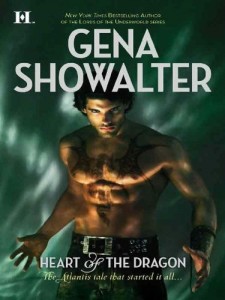 Searching for her missing brother, Grace Carlyle never dreamed she would discover a secret world populated by mythological monsters—or find herself facing a sword-wielding being whose looks put mortal men to shame.

But there he was, Darius en Kragin, one of a race of shape-shifting warriors bound to guard the gates of Atlantis, and kill all travelers who strayed within its borders.

Now Grace’s life was in his hands, and Darius had to choose between his centuries-old vow and the woman who had slipped beneath his defenses and stolen the heart of Atlantis’s fiercest dragon.

I admit I didn’t love this book. I think Showalter’s writing improved a lot since the publication of Heart of the Dragon but it is the first in the Atlantis series. 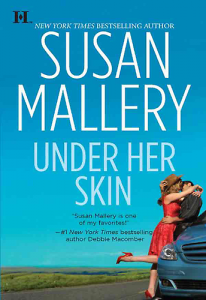 Lexi Titan can just see the headlines. All of Titanville will be buzzing. Not that she has any other choice. Faced with exactly thirty days to come up with two million dollars, she is out of options. Marry Cruz Rodriguez or lose everything–the successful day spa she built herself, her tyrant of a father’s respect. And the long-standing competition with her sisters for the family business. Cruz has money, success, smoldering good looks–everything but the blue blood needed to become a true member of Texas society. If Lexi agrees to be his fiancee for six months, lending him her famous father’s influence and connections, he’ll hand her a check on the spot. And in six months they’ll go their separate ways. But neither one is prepared for their long-ago shared passion to throw a wrench into what would seem to be the perfect deal….

Okay, this one I really really disliked because I didn’t much like Lexi and I thought the story line was super unbelievable. I thought I had reviewed it here at DA but I couldn’t find it in the archives. But your mileage may vary.