Daily Deals: The 6 book Zodiac series from Vicki Pettersson and others 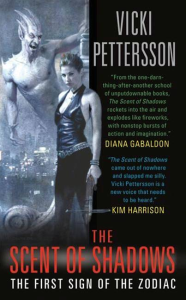 The Scent of Shadows by Vicki Pettersson. $ .99

Book 1 of the Zodiac series

When she was sixteen, Joanna Archer was brutally assaulted and left to die in the Nevada desert.

By rights, she should be dead.

Now a photographer by day, she prowls a different Las Vegas after sunset – a grim, secret Sin City where Light battles Shadow – seeking answers to whom or what she really is … and revenge for the horrors she was forced to endure.

But the nightmare is just beginning – for the demons are hunting Joanna, and the powerful Shadows want her for their own…

It’s hard to resist the series at this price (and I could not) but a friend warned me that the books are full of great ideas poorly executed with a lot of navel gazing. 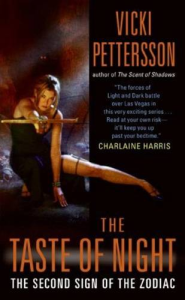 The Taste of Night by Vicki Pettersson. $ .99

Book 2 of the Zodiac Series

Being mortal isn’t easy. Being a superhero is even harder.

Even mortal, Joanna Archer was nobody’s idea of a victim. But now, infused with the supernatural power to alter the battle between Shadow and Light forever, what she’s become is a target. And when a toxic virus invades the valley, her allies are targets are well. To find the cure that will save them, Joanna must embrace her Shadow side … even if it leads her into an all-out battle with the demons of her past. 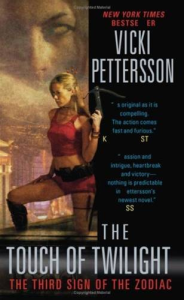 The Touch of Twilight by Vicki Pettersson. $ .99

3d book in the Zodiac series

On the surface she’s a sexy, sophisticated socialite, at home among the beautiful people of the Las Vegas upper crust. But Joanna Archer inhabits another world: a place ordinary humans can’t see and could never enter … a dangerous dimension where an eternal battle rages between the agents of Light and Shadow. And Joanna is both.

She never asked for the mantle that’s been thrust upon her, but she will not abandon it now that it’s hers. Stalked by an enigmatic doppleganger from a preternatural realm, Joanna can feel the Light failing – which is propelling her toward a terrifying confrontation with the ultimate master of evil, the dark lord of Shadow: her father.

Vegas is all about winning big – or losing everything. To save her friends, her future, her worlds, Joanna Archer will now have to gamble it all by fully embracing the darkness inside her. 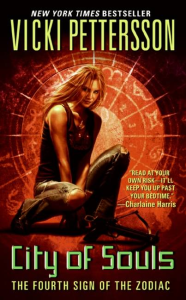 4th book of the Zodiac series

Joanna Archer, Agent of Light, has survived a violent initiation into the paranormal

world lurking behind the seedy seams of Las Vegas. She’s found a home, friends, and even t

he chance for a new life and love.

But evil never rests, and to save her beloved city, and herself, Joanna must venture into

a new world hidden among the shadows, one where the line between good and evil is barely

visible, every agent is a rogue … and each breath could be her last. 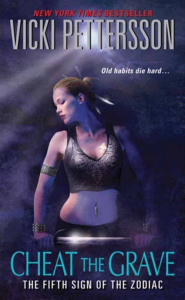 Cheat the Grave by Vicki Pettersson. $ .99

Book 5 in the Zodiac series

Joanna Archer is working hard to put the painful events of her recent past behind, doing her best to embrace mortality after being superhuman.

But when she is stalked by a madman, she is forced to dive back into Vegas’ underworld to piece together shocking discoveries about the mother who abandoned her, the lover who betrayed her, and the daughter who will follow in her footsteps. But in order to win back all those things, she must face off against a death-dealer who carries his soul in a blade… one that’s screaming her name. 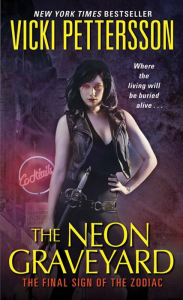 The Neon Graveyard by Vicki Pettersson. $ .99

Final book in the Zodiac series

Once she was a soldier for the Light, the prophesied savior who would decide the outcome of the eternal conflict raging in the dark corners of her glittering hometown.

Now Joanna Archer is just another mortal – still born of an impossible union of Shadow and Light … still hunted by both – and carrying the unborn child of a lover held captive by a depraved demon goddess. Joining forced with a band of rogue Shadow agents, Joanna’s ready to storm the stronghold of her demonic foe, risking everything to enter this ghastly, godforsaken realm. Because in a world that has stripped her of her power, identity, and fortune, Joanna has nothing left to lose – except her baby, her future, and the epic war poised to consume the city. 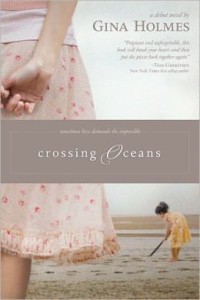 Jenny Lucas swore she’d never go home again. But being told you’re dying has a way of changing things. Years after she left, she and her five-year-old daughter, Isabella, must return to her sleepy North Carolina town to face the ghosts she left behind. They welcome her in the form of her oxygen tank–toting grandmother, her stoic and distant father, and David, Isabella’s dad . . . Who doesn’t yet know he has a daughter. As Jenny navigates the rough and unknown waters of her new reality, the unforgettable story that unfolds is a testament to the power of love and its ability to change everything—to heal old hurts, bring new beginnings . . . Even overcome the impossible. A stunning debut about love and loss from a talented new voice.

PW says “As Jenny comes to face her future as well as her past, dramatic emotions yield to an appreciation of life and an enjoyment of the grace of fleeting moments. There can be no happy ending, but Holmes ties a neat bow of acceptance around this haunting tale that packs an emotional wallop. Keep tissues near.” 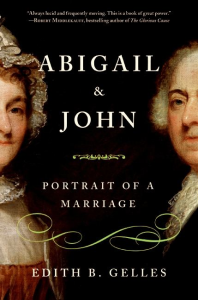 The story of Abigail and John Adams is as much a romance as it is a lively chapter in the early history of this country. The marriage of the second president and first lady is one of the most extraordinary examples of passion and endurance that this country has ever witnessed. And it is a drama peopled with a pantheon of eighteenth-century stars: George and Martha Washington, Thomas Jefferson, his daughter Patsy, Ben Franklin, and Mercy Otis Warren.

Abigail and John were a uniquely compatible duo, and in their remarkable union we can see the strength of a people determined to achieve full independence in the face of daunting odds. Yet while much has been written about each as an individual, Abigail and John provides, for the first time, the captivating story of their dedication and sacrifice that helped usher in the founding of our country, a time that fascinates us still.

Maybe the first power couple? Kirkus Reviews said ” Notwithstanding some occasional, unfortunate academic locutions(e.g., “gender” used as a verb), Gelles pushes their marriage and family life vividly to the fore. She examines the couples’ shared sorrows—a daughter’s miserable marriage, an alcoholic son—as well as the many triumphs that would have been impossible, but for Abigail’s wise management of her household and solicitous care for her brilliant, deeply insecure husband..A revealing exploration of an exceptional marriage marked by mutual understanding, empathy and deep love. “

→ Jane
Previous article: REVIEW: Back to You by Robin Kaye
Next Post: Thursday News: I’m running away to join the circus (and the indie bookstores who are suing Amazon should come with me)