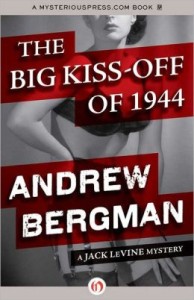 Like all chorus girls, Kerry Lane yearns to get her name on the marquee. After years of high-kicking, she lands a bit part in a Broadway smash hit which should lead to better things. The only thing holding her back is her past: specifically a series of stag films from her days as a struggling wannabe film starlet. When a blackmailer demands a payoff to keep them out of the public eye, Kerry comes to Jack LeVine. Stocky, sweaty, and bald, LeVine is a Jewish private detective who makes a living by being polite. But underneath his smile lies a bulldog. Lured by long legs and a roll of crisp twenties, LeVine takes Kerry’s case. But before he can speak to the blackmailer, the crook turns up dead. As LeVine hunts for Kerry’s pictures, he finds that the heart of this case is even uglier than greed, lust, or murder. It’s politics.

Andrew Bergman (b. 1945) is a successful comedy screenwriter and occasional author of hard-boiled mysteries. After receiving a PhD in American history from the University of Wisconsin at Madison, Bergman sold Tex X, a novella about a black sheriff in the Old West, to Warner Bros. The studio hired him to turn his story into a screenplay, as part of a team of comedy legends led by Mel Brooks and Richard Pryor. The result was Blazing Saddles (1974), which is widely regarded as one of the funniest films of all time. After that early success, Bergman published the first two novels in a mystery series starring Jack LeVine, a hard-boiled Jewish PI. After The Big Kiss-Offof 1944 and Hollywood and LeVine, he continued writing and directing films, producing such classics as Fletch, The Freshman, and Soapdish. In 2001 he returned to LeVine in Tender Is LeVine. Bergman continues to live and write in New York City.

Bergman co wrote the screenplay for Blazing Saddles. The few reviews I’ve seen indicate that the Blazing Saddles humor is evident but that the story isn’t as strong as the wit. 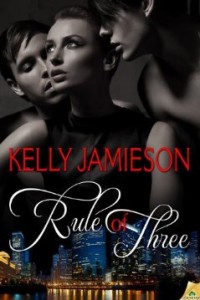 The Rule of Three by Kelly Jamieson. $ Free

When wicked-sexy Dag returns to catch up with his old college buddy Chris and meet The Girlfriend, old feelings resurface, new attractions are explored, and a storm of sexual sparks is unleashed that leads them into forbidden areas.

Kassidy blossoms under the attentions of two loving men, but neither she nor Chris are expecting the ménage to take a quarter turn toward Dag…and his feelings for Chris. When it’s revealed that Dag’s attraction to Chris is one big reason he left town, a tangled mess of old hurts and new feelings might destroy friendship. Love. Might destroy everything.

Even the three star reviews praised the book for addressing the menage aspects well.

And that’s where Rule of Three stood out above all the ménage stories I have read so far. It explores in detail and depth the emotional struggles, doubts and fears the parties in such a sexual and couple relationship deal with. In most cases ménage stories gloss over the doubts and problems such arrangement would cause for the couple, their entourage and society in general (if they don’t skip these altogether), so the realistic approach Kelly Jamieson took in Rule of Three was a welcome change! 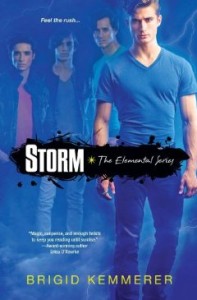 Becca Chandler is suddenly getting all the guys– the ones she doesn’t want. Ever since her ex-boyfriend spread those lies about her.

Then she saves Chris Merrick from a beating in the school parking lot. Chris is different. Way different: he can control water–just like his brothers can control fire, wind, and earth. They’re powerful. Dangerous. Marked for death.

And now that she knows the truth, so is Becca.

Secrets are hard to keep when your life’s at stake. When Hunter, the mysterious new kid around school, turns up with a talent for being in the wrong place at the right time, Becca thinks she can trust him. But then Hunter goes head-to-head with Chris, and Becca wonders who’s hiding the most dangerous truth of all.

This has an older YA feel to it (verging on the cusp of NA). I reviewed this book and enjoyed the story quite a bit.  Chris is an angry young man and he reacts poorly, all the while knowing he is reacting poorly.  Becca suffers because of her scars and she doesn’t really understand a power that she has inside her.  I’d recommend at the $1.99 price. 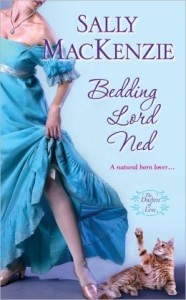 Determined to find a husband, Miss Eleanor “Nell” Bowman attends a ball put on by the Duchess of Greycliffe, fondly referred to as the Duchess of Love. But she roundly dismisses the suitors the matchmaking hostess has invited on her behalf. For it’s the duchess’s dashing son Ned, Lord Edward, who long ago captured Nell’s heart—and roused her desire. All it takes is a pair of conveniently misplaced silky red bloomers to set the handsome widower’s gaze on this unusual girl who is clearly more than meets the eye…

After more than a year of mourning, Ned longs to finally start anew. At first glance, the birthday ball his mother has thrown in his honor is decidedly lacking in suitable mistresses. But he senses something unexpectedly alluring beneath the veil of Nell’s plain exterior—something she’s anxious to reveal, and the lonely Lord is incapable of denying…

Fans of MacKenzie say that Lord Ned is a seriously underdeveloped character and they weren’t sure why Nell pursued him. He is the son of a couple in a previous book “The Duchess of Love” and perhaps therein lies the attraction. PW says its funny.