There are some good price reductions but not really deals but given that they are for books we recommended, I’m listing them anyway: FASTBALL, by V.K. Sykes: Book one in the USA Today Bestselling series, The Philadelphia Patriots

Baseball reporter Maddie Leclair has spent years chasing her dream job–covering the Philadelphia Patriots major league baseball team. But in order to make it to the top tier of sports reporting, she needs to score an interview with the most private and elusive athlete in baseball, Patriots’ superstar Jake Miller.

On the rebound from a devastating injury, the last thing Jake needs is a pushy female reporter distracting him. But one look at Maddie and he finds himself trying for a different kind of play, one that involves bedrooms and not baseball stats. Sleeping together could damage both their careers, and Maddie is all about saying no. But when it comes to the game of love, Jake is playing to win.

OFFSIDE, by Juliana Stone: Book one in The Barker Triplets trilogy (Including new, bonus material) When hockey phenom Billie-Jo Barker returns home and decides to play in the local Friday night hockey league, all hell breaks loose. Not because Billie’s talent is in question, but because Billie is a woman. And though these are modern times, some of the local guys still have a problem letting a girl into their ‘men’s club.’

THE PROPOSITION, by Jennifer Lyon: The Proposition is book one of three in The Plus One Chronicles Trilogy.

We all know how much I love my sports romances. The Stone book is the only one I’ve read (and only author I’ve read) in the collection. It wasn’t my favorite sports romance primarily because it was about a female athlete but we didn’t get to see her at the top of her game. That said, 99c for three sports books is like a dream deal for me. 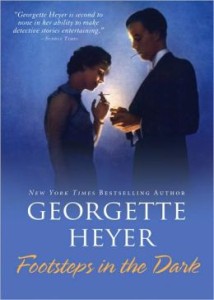 Footsteps in the Dark by Georgette Heyer. $ 1.99

What begins as an adventure soon becomes a nightmare…

Locals claim it is haunted and refuse to put a single toe past the front door, but to siblings Peter, Celia, and Margaret, the Priory is nothing more than a rundown estate inherited from their late uncle-and the perfect setting for a much-needed holiday. But when a murder victim is discovered in the drafty Priory halls, the once unconcerned trio begins to fear that the ghostly rumors are true and they are not alone after all! With a killer on the loose, will they find themselves the next victims of a supernatural predator, or will they uncover a far more corporeal culprit?

So I can’t remember if these mysteries are supposed to be awesome or horrible by Heyer. Commenters, sound off! 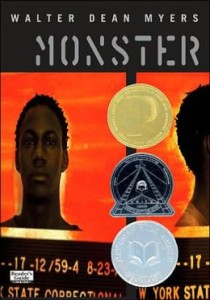 Steve (Voice-Over)
Sometimes I feel like I have walked into the middle of a movie. Maybe I can make my own movie. The film will be the story of my life. No, not my life, but of this experience. I’ll call it what the lady prosecutor called me … Monster.

I feel like I may have profiled this book in the past but I didn’t find it in a quick search of my archives. Here’s what one reviewer said:

“Who are this novel’s intended readers? More specifically, who should they be? Some consideration of these questions is necessary for this unusual book. Mature teens will devour Monster. Adults will too, and in fact will find the mixed screenplay/journal format refreshing and fast-paced, not kid-like at all. Frankly, though, I believe younger teens may be impacted most profoundly (and positively) by the story of Steve Harmon, who stumbles almost unknowingly into a nightmare that might keep him locked behind bars the rest of his life. However, these younger teen readers may need some guidance and support while reading Monster. It’s a gritty tale. While Myers deals discreetly with the jail’s lack of privacy (open toilets) and frequent invasions of privacy (for example, sexual coercion between inmates), he doesn’t obscure those realities. We watch Steve sit in that courtroom and sympathize with his stomach distress, which is not merely the result of nervousness over the outcome of the trial but worsened because he’s not comfortable using the toilet in open sight of the other prisoners.” 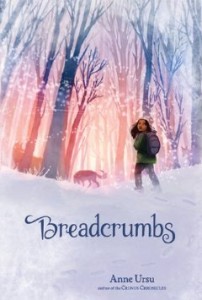 I read this with the tot last year and thought it was imaginative and posed some provocative questions for a middle grade reader. The ending was a little less than satisfactory but I enjoyed it.