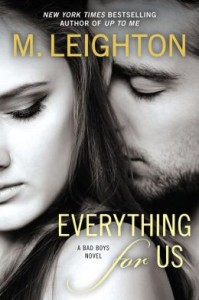 When it comes to passion this hot, it’s all or nothing.

Olivia Townsend’s wealthy cousin Marissa had everything a girl could ask for—a great job, a privileged life, and all the friends she wanted. Or, at least, all the friends money could buy. But one case of mistaken identity has turned her privileged world upside down.

An abduction gone wrong lands her right in the lap of the sexiest, most dangerous man she’s ever met. To Marissa, he’s an enigma, but one to whom she’s irresistibly, inexplicably drawn.

With him comes a new world of freedom and passion, of dark shadows and dangerous secrets, a world where nothing is what it seems—except for the blind passion that Marissa can’t escape—or maybe even survive.

I don’t even know why this is discounted because I thought it had appeared on the New York Times bestseller list. There are released due on September 3, 2013. This author does not work for me. Her plots are over-the-top and and lack believability. However, she is hugely popular and thus there must be something within her books that a lot of readers respond to. 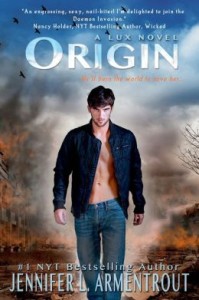 Daemon will do anything to get Katy back.

After the successful but disastrous raid on Mount Weather, he’s facing the impossible. Katy is gone. Taken. Everything becomes about finding her. Taking out anyone who stands in his way? Done. Burning down the whole world to save her? Gladly. Exposing his alien race to the world? With pleasure.

All Katy can do is survive.

Surrounded by enemies, the only way she can come out of this is to adapt. After all, there are sides of Daedalus that don’t seem entirely crazy, but the group’s goals are frightening and the truths they speak even more disturbing. Who are the real bad guys? Daedalus? Mankind? Or the Luxen?

Together, they can face anything.

But the most dangerous foe has been there all along, and when the truths are exposed and the lies come crumbling down, which side will Daemon and Katy be standing on? And will they even be together?

The first and fourth in the series are on sale for $2.99. The fourth one, Origin, was originally released on August 27, 2013. Do I know what is going on with these deals? I do not.

If you recall the Mary Balogh sale just a few weeks ago, I was told that it was likely due to some aggressive price matching. One retailer lowers the price for a loss leader and the other retailers (or often just Amazon) price match. But it has to be driving early readers crazy. 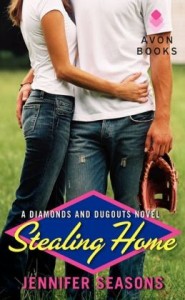 Love may be just a game, but the baseball players in Jennifer Seasons’ sexy diamonds and dugouts series— they’re playing for keeps!

Mark Cutter has it all: a lucrative baseball career, fast cars, and faster women—and all thanks to his priceless good luck charm. At least, that’s what he thinks before Lorelei Littleton shows up. Next thing he knows, he’s waking up alone, the sexy brunette has vanished, and his good luck charm is gone. More than a little curious about the wicked-hot cat burglar and determined to get his property back, Mark’s going to track down the thief and make her pay—big time.

Maybe Lorelei feels a tiny bit guilty for stealing Mark’s good luck charm, but when it’s worth $100,000 and the money could save her niece’s life? She’s not losing sleep over it . . . but him? Lorelei can’t get the ballplayer with the bad attitude out of her head. And now he’s come after her with more than just revenge in his eyes. Lorelei has a choice: turn over the charm and lose the money, or keep it and risk losing everything . . . including her heart.

I don’t remember reading this book until I saw the title and then I read the blurb. Yes, I thought stealing his good luck charm was really shady of the heroine. I never got on board with the story. (Review Here) But hey, it’s free. I guess for full priced books, 99c is the promotional price but for $2.99 books, free is the promotional price? 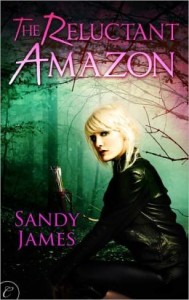 The last thing Rebecca Massee expects on her wedding day is to go from jilted kindergarten teacher to Amazonian Earth warrior. But when she causes an earthquake after her groom says I don’t, she discovers that not only does she possess incredible powers, she is one of four lost chosen sisters who must fight to keep humanity safe from rogue gods and demons. Luckily she has help: ruggedly handsome Scottish warrior Artair MacKay, her protector and teacher.

An immortal, Artair has trained countless warriors for more than four hundred years. He understands Rebecca’s confusion at the new world she’s been thrust into and worries she is too emotionally vulnerable, but that doesn’t stop his growing feelings for the beautiful and fearless woman.

When an evil force threatens to destroy the Amazons, Rebecca must claim her full powers—but they come at a cost. Can she sacrifice the man she loves if it means saving the world?

Speaking of free, here’s another. It’s been on sale before but I figured free is free, right? 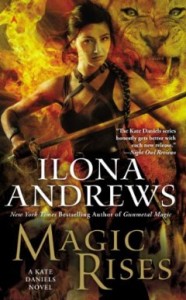 Atlanta is a city plagued by magical problems. Kate Daniels will fight to solve them—no matter the cost.

Mercenary Kate Daniels and her mate, Curran, the Beast Lord, are struggling to solve a heartbreaking crisis. Unable to control their beasts, many of the Pack’s shapeshifting children fail to survive to adulthood. While there is a medicine that can help, the secret to its making is closely guarded by the European packs, and there’s little available in Atlanta.

Kate can’t bear to watch innocents suffer, but the solution she and Curran have found threatens to be even more painful. The European shapeshifters who once outmaneuvered the Beast Lord have asked him to arbitrate a dispute—and they’ll pay him in medicine. With the young people’s survival and the Pack’s future at stake, Kate and Curran know they must accept the offer—but they have little doubt that they’re heading straight into a trap…

A little pricier than ordinary but a good deal. Too bad the Kobo price is $7.99 but you can still use the multi use 50% off coupon of bookriot50. This book was published eons ago in July 2013. It was given an A review by Amy.